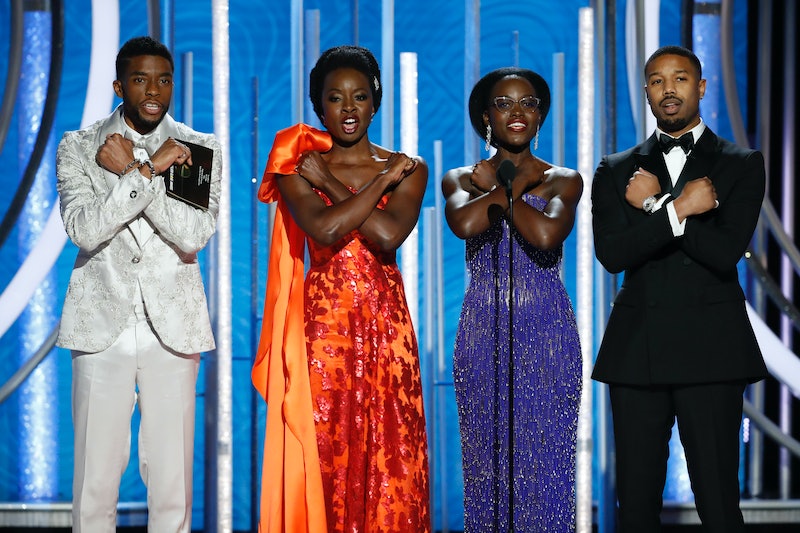 Out of all the standout action films moviegoers lined up to see in 2018, Black Panther is surly one that made it high on your list — especially with its $1.3 billion sales topping blockbusters like Titanic in only a month. The film deserves all its accolades, and all the looks from the Black Panther cast at the 2019 Golden Globes prove the actors dressed to sweep them all.

Black Panther was not only a favorited action movie to Marvel fans, but also touched on the underlying divide between Africans and African-Americans within Black Culture, a plot line that had never been played out on the big screen . The Marvel film had broken records like no other in that it hit the billion dollar mark in less than a moth of its release into theaters, making it the highest grossing release of 2018 and the fifth best opening of all time. With all the success the film has had over the past year, it comes as no surprise that the film is up for two Golden Globe Awards including Best Motion Picture in the drama category as well as Best Original Score.

Regardless of whether or not the cast wins both awards, their Golden Globe looks will still get a standing ovation. Take a look for yourself.

Lupita N'yongo's purple fringe dress is the eighth world wonder at this point with all its beaded layering. This majestic dress covers N'yongo's feet, but according to The Zoe Report, the actress wore a pair of $45 silver heels from Aldo that you can still buy right now.

When Danai's not putting a vibranium spear through your car window as the General of Wakanda, she's paying tribute to her home country on the red carpet. The actress posted to her Instagram that her red dress was a custom red Rodarte gown inspired by the National Flower of Zimbabwe, the Flame Lily.

If you're not drowning in Michael B. Jordan's brown eyes, then you're watching them on the red carper. He rocked a classic black button down tux and topped it off with a bow tie. Between playing the misunderstood villian in Black Panther and the hard-working boxer of a champion, it's hard to not look at him.

Being the king of a secret nation calls for standing out amongst the other suits at an award show. Chadwick Boseman did the polar opposite of Jordan and rocked head to ankle silvery white with a pair of grey oxfords.

Black Panther fans may have missed out on seeing other cast members like Angela Basset and Letitia Wright, the ones who gave looks served them hot. Whether or not the cast scoops up Best Motion Picture, it hardly matters. It's a film that has already broken a plethora of records in the industry, and it will be the first film with an all Black cast, which is something that has already gone down in history.