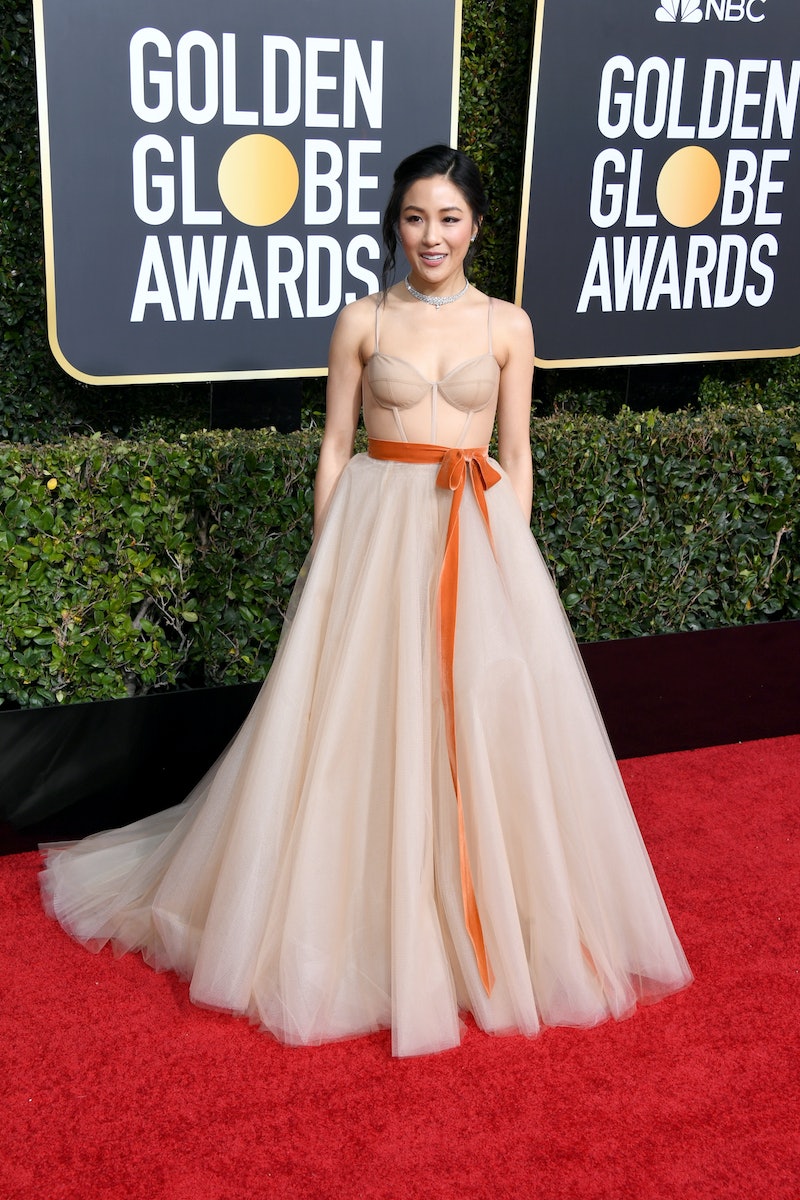 When it comes to blockbuster movies of 2018, Crazy Rich Asians should definitely be one of the first that comes to mind. The film actually became the highest grossing romantic comedy in a decade, and all the looks from the Crazy Rich Asians cast at the 2019 Golden Globes will have you so glad that film received its nominations. You know, other than the fact that it's an amazing film with insanely talented actors.

Crazy Rich Asians not only crushed it at the box office by earning a whopping $236 million globally, but it is the first film since Joy Luck Club to have an all Asian cast. Now, they're making another splash thanks to their appearance together on the Golden Globes red carpet. Tonight, the film is nominated for Best Motion Picture - Musical or Comedy, and star Constance Wu who portrayed lead Rachel Chu in the film, is nominated for Best Performance by an Actress in a Motion Picture - Musical or Comedy.

It's clear that no matter whether they win tonight or not, though, the cast has already come to the award show, looking fabulous, and if there were an award for most fashionable ensemble, they may just take home that trophy as well (or split it with the Black Panther cast).

So what did the cast wear to the joint film and television awards this year?

Wu's sheer dress with a long coral sash was a deconstructed lingerie-inspired dream that was feminine, ethereal, and perfect for the show.

Yeoh looked stunning on the carpet in her dual fabric emerald dress, but it wasn't the only emerald item worth noting.

Gemma Chan's voluminous, navy skirt was stunning and dramatic, but the best part may be that the gown was hiding a pair of shorts underneath. Plus, say hello to that perfect red lip.

Ken Jeong opted for a classic tuxedo for the formal awards, but the pop of purple that matched his wife's dress was the most perfect part.

The cast of Crazy Rich Asians looking flawless on the red carpet is a great reminder to fans of the film that the sequel to the mega-hit is on its way. Back in August, the second film in the book series written by Kevin Kwan was officially announced, and director Jon M. Chu is set to return to direct the film. The Hollywood Reporter also reports that the screenwriters from the original film are said to be returning to write its sequel which is likely to be named China Rich Girlfriend just like Kwan's follow-up novel.

While the entire cast of the film may not have been in attendance at the Golden Globes award, those who did walk the red carpet looked absolutely stunning. So whether they win or not, they certainly won the red carpet for the night. And with a sequel on the way, there's much more to come from this cast!