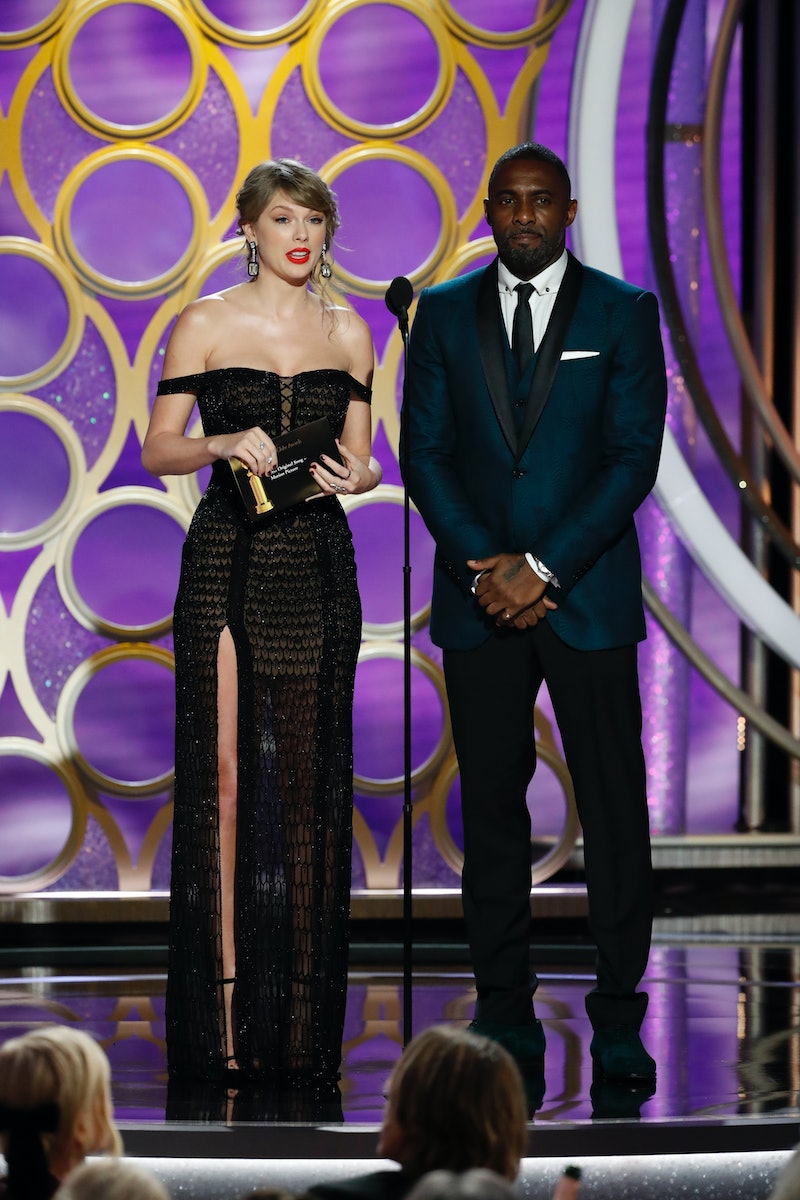 While Lady Gaga pretty much won the 2019 Golden Globes red carpet with her poufy, powder purple Valentino Couture gown that nodded to a Hollywood icon, a specific sartorial trend asserted itself at this year's ceremony. Sheer dresses were the top fashion trend at the 2019 Golden Globes. The trend wasn't super obvious, though.

From Taylor Swift's semi-see-through and black Versace gown to Kristin Cavallari's metallic dress to Rosamund Pike's black frock to Lucy Liu's etheral cape and gown, the sheer dresses that dominated the red carpet were all unique in their own way.

I'm not talking about naked dresses, either. It wasn't simply about see-through, nude material. It was about unexpected sheer and see-through details that made each dress a head-turner. You also picked up on different details every time you looked at these dresses.

Below is a rundown of all the sheer dresses at this year's Golden Globes ceremony. You won't be able to stop looking at them — I promise.

Perhaps the sheer elements of these celeb red carpet choices will inspire prom and wedding trends in the spring. It's entirely possible.

Without further adieu, feast your eyes on all the sheer frocks of the 2019 Golden Globes.

The actor's pink dress had appliques. But the material was sheer, as was the cape. It was an angelic look.

Blink and you might miss the sheer-osity of Rosamund Pike's dress. While the cutouts showed skin, you'll notice a sheerness to the bottom half of her black gown. It was the epitome of low-key sheer.

Swift's off-the-shoulder, black Versace dress was see-through in a coy way. It was just sheer and suggestive enough without showing too much.

Francia Raisa's mermaid-shape dress had sheer detals in the sleeves and abdomen. It almost looked like a two-piece ensemble.

The green metallic dress worn by Tanika Ray also had its sheer qualities, thanks to the placement of the patterns.

The model's gown featured floral appliques and a sheer bodice.

Indya Moore's dress had a futuristic, chain mail vibe. It was totally see-through without showing a lot.

The model's golden and metallic dress was subtle in its see-through elements.

See what I meant about all the sheer dresses being super unique? The Mary Poppins star wore a lacy frock that had a sheer bodice.

The actor wore a lovely, princess-like blush gown with a sheer top. The delicate color was offset by the orange sash.

The wife of actor Jason Bateman got in on the trend with her black and silver gown.

The Will & Grace star's dress was defined by its feathers. But it had a sheer panel on top.