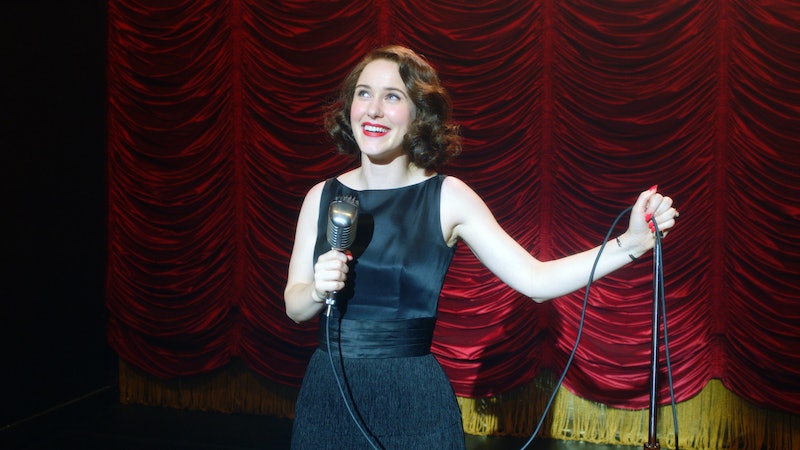 Spoilers ahead for The Marvelous Mrs. Maisel Season 3. Midge may be a comic (and not a singer, like many people rudely assume), but that doesn't mean she doesn't appreciate good music. So, naturally, the soundtrack for The Marvelous Mrs. Maisel Season 3 is packed with nostalgic tunes — perhaps even more so than seasons past, as this marks the first time the series has incorporated original songs.

These tracks, written by Curtis Moore and Tom Mizer, can be heard during the numerous performances Shy Baldwin gives while on tour with Midge. Shy is played by Leroy McClain, but the vocals actually come from Broadway singer Darius de Haas, so that's who you're hearing when Shy is on stage. Season 3 also includes an elaborate synchronized swimming number to a show tune classic, and even Sterling K. Brown gets a chance to sing.

Unfortunately, the official soundtrack won't be available to stream until Dec. 13, but here's an episode-by-episode breakdown of the songs, if you're too eager to wait.

More like this
Taylor Swift Visited The 'Glee' Set For This Bizarre Season 5 Episode
By Grace Wehniainen
Linda Ronstadt’s “Long Long Time” Plays A Pivotal Role In The Last Of Us
By Brad Witter
The 12 Most Controversial & Unexpected Grammy Moments Ever
By Jake Viswanath
Eurovision Has Been Given A Whole New Look Ahead Of Its Liverpool Debut
By Bustle UK
Get Even More From Bustle — Sign Up For The Newsletter
From hair trends to relationship advice, our daily newsletter has everything you need to sound like a person who’s on TikTok, even if you aren’t.