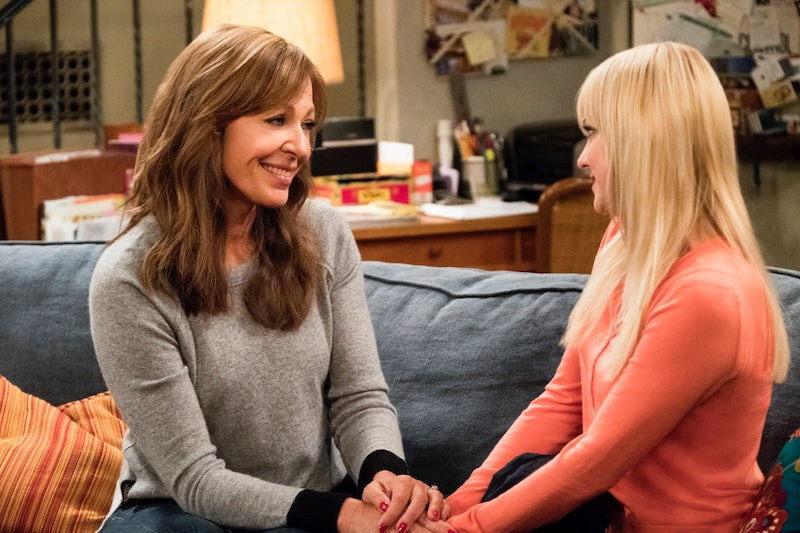 Bringing home a gold statue on Oscar night is sweet, but celebrating it with your TV family in the morning might be even better. As reported by Entertainment Weekly, the Mom cast celebrated Allison Janney's Oscar win in style on Monday. The 58-year-old took home her first ever Academy Award for her role as Tonya Harding's mother, LaVona, in I, Tonya, but despite her big win, she still had to return to her day job as Bonnie on CBS' Mom the next morning. However, returning to work on a Monday is always vastly improved by accolades and roses.

EW reports that the Mom producers presented Janney with 90 roses in celebration of the Academy Awards 90th ceremony, and served up apple cider to toast the newly minted Oscar winner in their midst. In return, the I, Tonya actor passed around her trophy for the cast and crew to hold and snap pictures with. The general consensus appears to be that Oscars are just as heavy as you would imagine. As Janney's co-star Anna Faris wrote on Instagram,

Faris reportedly also gave a speech celebrating her co-star's win before the morning's table read commenced. Writer Adam Chase even captured the moment that Janney arrived for work, and the video is full of people applauding and showing the actor just how genuinely proud they are of her accomplishments. The love-fest didn't stop there — according to EW, a writer's assistant made the Oscar winner a t-shirt that reads: "I survived awards season and all I got was this lousy T-shirt." Of course, the actor got way more than just a t-shirt. In addition to nabbing an Academy Award, she also took home a Golden Globe, BAFTA, and Independent Spirit Award for her role.

I, Tonya has led to Janney having one of her best years yet, but this is one Oscar-winner whose career is full of star turns. From The West Wing to Masters of Sex and Mom, the actor never seems to slow down. But what's most notable is how much her peers appear to admire and respect her. Not only did her fellow cast and crew celebrate her on the set, her Mom family has been sending out congratulations on social media since the moment that little gold statue was placed in her hands.

Faris offered both a formal congratulations, and a tweet that simply reads, "Yess, mom!!!!" Another one of Janney's Mom co-stars, Mimi Kennedy, tweeted, "Acting in great stuff is its own reward — but statues hold doors open! Congratulations @AllisonBJanney." And actor Beth Hall, tweeted,

"The closest I'll get to an Oscar! So happy for @AllisonBJanney. Thank you for sharing with everyone @MomCBS today!"

One of the best reactions came from Jaime Pressly. The 40-year-old, who plays one of Bonnie's pals, Jill, shared a video of herself watching the moment Janney won the Oscar. Her excitement is beyond adorable. Pressly screams, "Yes! She did it! She did it!" In fact, she appears to be so excited that she slightly startled one of her little boys, but if he understood what Oscars were, he would totally understand his mom's excitement.

Janney had a major career moment on Sunday night. After years in the industry, she took home a well-deserved Oscar for her amazing work. However, few things are quite as sweet as having good friends to celebrate your triumphs with. It's clear from the ecstatic and supportive reactions of the cast and crew of Mom, that Janney has an amazing team cheering her on every step of the way.

More like this
Hugh Jackman & Deborra-Lee Furness’ Relationship Timeline Started With A Mutual Crush
By Hugh McIntyre
Jennifer Hudson Becomes An EGOT Winner At The 2022 Tony Awards
By Jake Viswanath
Peaky Blinders Won’t Return For Season 7 — But A Movie Is In The Works
By Brad Witter
The EGOT Winners List: Only These 17 Artists Have Ever Reached EGOT Status
By Radhika Menon and Marina Watts
Get Even More From Bustle — Sign Up For The Newsletter