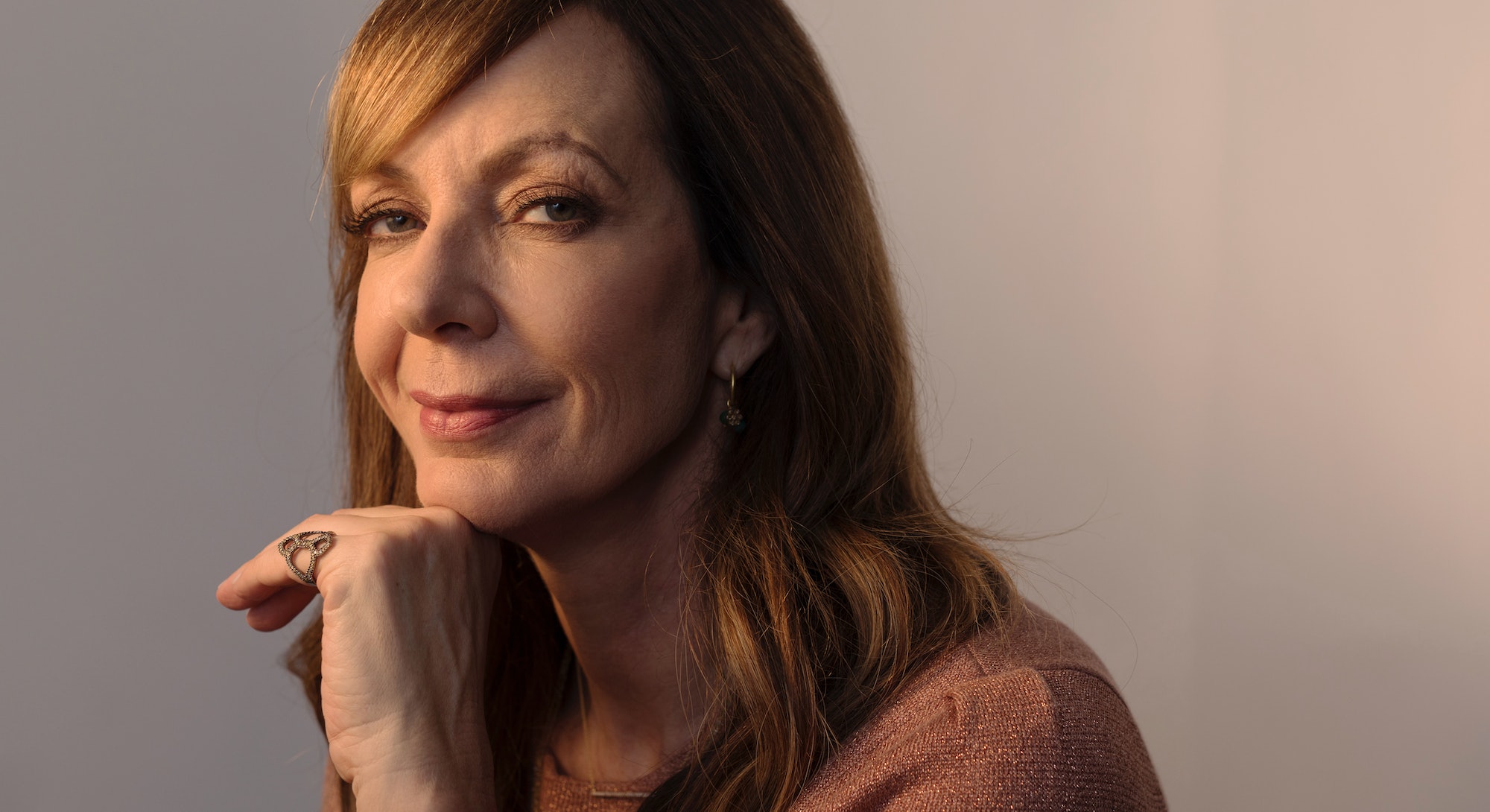 The day on which Allison Janney visits Bustle's office hasn't been a particularly good one for the actor. This morning, she tells me in an unusually soft-spoken voice, she woke up with her heart racing, and she's spent the hours since feeling off. She's unsure of the reason why — could be the weather, could be a cold — but most likely, it's the general stress of 2017 taking its toll on even this 58-year-old, seven-time Emmy winning, 2018 Oscar frontrunner (for December's I, Tonya). Everything about this year, from the Trump presidency to Hollywood's deluge of sexual assault allegations, has put Janney on edge. So what does she do to cope? What everyone else does — she squeals over adorable doggos.

"I've sort of taken to numbing [myself] out, just looking at puppies," Janney says with a grin. It's not just her own three adopted dogs, although she obviously worships them; "My god. The way they greet me and love me, it’s just as simple as that," she says. It's the pups Janney sees online each day, too. Sitting on the couch next to me in Bustle's studio, she pulls out her iPhone and opens Instagram, running through a handful of the animal-focused accounts — DogsBeingBasic, DoggosDoingThings, EsthertheWonderPig, and her personal favorite, BlackJaguarWhiteTiger — that she checks on the regular and now, she makes clear, she wants me to do the same. When I show her my own favorite account, WeRateDogs, her eyes widen with glee, and when I tell Janney she can submit her own dog to be "rated," she practically jumps for joy. "These are the things that make us happy," she says with a bemused shake of her head.

If it feels a bit surprising that an actor who's been in the industry for decades is as shaken up by the current state of the world as the rest of us, it shouldn't — Janney may not be a millennial constantly plugged into Twitter, but she's just as affected by everything that's going on. "This has been one of the worst years in my relatively short time here," she says of 2017, echoing the sentiments of, well, everyone. There's the political administration, led by a man "who’s never held accountable for anything," as Janney says. Then there's the general state of the world, filled with "mass shootings and natural disasters," all happening far too often.

But most pressing on the actor's mind, and that of so many others, are the Hollywood scandals — the barrage of famous men being accused of sexual harassment and assault, and the greater number of brave women and men coming forward to share their painful stories. "I didn’t know if there’d ever be a time where that conversation would be able to come out into the open," Janney says. "I didn’t know that it was going to happen in my lifetime."

But it is, and like everyone else, she's having trouble processing it all. While she "always knew about the abuses of power and knew that I had to watch out for the casting couch scenario," Janney says, she's been lucky enough to have never experienced abuse herself, as far as she knows. "I may have and was just so dense I didn’t recognize it," she says. "I was pretty naive about certain things coming to New York and not really thinking that people would do that sort of thing. Why would you abuse your power?"

She's wised up over the years, of course, but that doesn't make the current slate of allegations any less affecting. Her feelings about the situation are "very complicated"; she feels deeply for the victims, but it's been difficult to see her "heroes" like Louis C.K. go down. And then there are the men accused of assault that she's worked alongside, like Kevin Spacey, for which her feelings are even more unsettled. "Someone asked me, do you think you’ll watch American Beauty again? And I was like yes, yes, I’ll always love that movie, it’s a great movie, and he did great work in it," Janney says quietly. "But it’s just gonna bring up a lot of questions like that. Well, do you go back and take away his Oscars? It’s hard. I’m glad I’m not the one who has to decide that in this moment."

It's no wonder Janney's heart's been racing. Even for an actor who's worked in Hollywood for three decades, what's happening now is unprecedented. And so she's been turning to the dogs, and to her friends, the "Whisper Network" of women who've "always looked out for each other" and keep each other informed of which famous men they should or shouldn't work with when taking on projects. And there's also the joy she gets from her work, like her CBS show, Mom, and I, Tonya, a fantastically entertaining movie about the rise and fall of Olympic figure skater Tonya Harding. In the film, out Dec. 8, Janney plays LaVona, Tonya's mercilessly cruel, bowl cut-sporting mother, and her performance is a career best. When the Oscar nominations roll around in January, it'll be a shock if Janney's name isn't on the list, let alone at the top of every voter's mind.

"It's crazy," the actor tells me with a smile, when I bring up the possibility. "It’s pretty exciting, and the fact that Steven [Rogers, I, Tonya's screenwriter] is my friend and wrote this part for me — it’s kind of all kinds of wonderful, and I’m optimistically hopeful and excited about it and nervous."

Although Janney has earned plenty of acclaim before, for roles like C.J. Cregg on The West Wing and Margaret Scully on Masters of Sex, I, Tonya is new territory for her. For one thing, the part itself is meatier than the typical supporting character, but more than that, Janney's performance is just something else, with her version of LaVona going between utterly terrifying and uproariously funny in a matter of seconds, over and over again. It's hit a nerve with critics, and Janney is, cautiously, soaking in the praise. "I’ve not been in this realm before," she says. "It’s new and yet feels somewhat familiar."

Although Janney and LaVona have never met, the film's depiction of the woman is drawn from Tonya and the athlete's ex Jeff Gillooly's accounts, as well as people who met LaVona at skating rinks over the years. But with those stories, plus old footage and photos of LaVona showcasing her unique look (the bowl cut, but also huge glasses, a fur coat and, yes, an actual bird perched on her shoulder), Janney managed to create a character who's often an abusive, mean-spirited villain, yes, but also a determined mother who'd give up anything — her money, her reputation, even her daughter's love for her — to see her child succeed.

"It was quite a task trying to figure out... how to play this woman and feel justified in doing and saying all the horrible things that she does to her daughter," Janney says. But while "you could look at it and judge her," she continues with clear sympathy, "LaVona would say, I gave [Tonya] an opportunity and she screwed it up."

When the Harding/Kerrigan scandal occurred in the late '90s, Janney had long since moved past her own days as a prospective figure skater, but like everyone with a TV, she fervently followed the scandal and formed her own opinions on the case. "It was one of those things I watched with my hand over my eyes, just sort of peeking, because I was so mortified," she recalls.

But while she judged Harding harshly, she also sympathized with her, and after learning more about her character and upbringing for I, Tonya, Janney practically feels a kinship with the skater. Like Harding, Janney is "motivated by anger," thriving off criticism and dismissal rather than praise. With a smile, she recalls a ritual she shared with Stanley Tucci during an Off-Broadway play they did together in 1994. "Before I’d go on stage, I’d say, 'come on, say the thing.' And he’d say, 'I want you to go out there and show everyone how terrible you are. You are the worst actress I’ve ever seen in my life," Janney says now, laughing. "And I’d go, 'thank you.' That’s all I needed."

The actor has come a long way from those days in New York, but she still often feels like the "underdog," she says, determined to prove both to audiences and herself that she's worthy of the roles and praise she receives. It's classic Imposter Syndrome, and at first, this seems far from reality — this is no newcomer to Hollywood, after all, but Allison freakin' Janney, a woman won two Emmys just in 2014 alone. But then again, this is the first time we're talking about her in the same sentence as the Oscars, despite decades of acclaimed work. Janney has always been in the center of Hollywood, but perhaps she's stayed closer to the sidelines than any of us realized.

But that's all changing now, with I, Tonya and the awards undoubtedly on their way and the fact that it feels like wherever you look these days, Janney is there, on TV and in movies and on magazine covers standing next to Jennifer Lawrence and Jessica Chastain. Janney's 2017 may not have been the best, but her 2018 is already looking like it's going to be pretty damn great — and even if it isn't, she can always turn to the dogs.