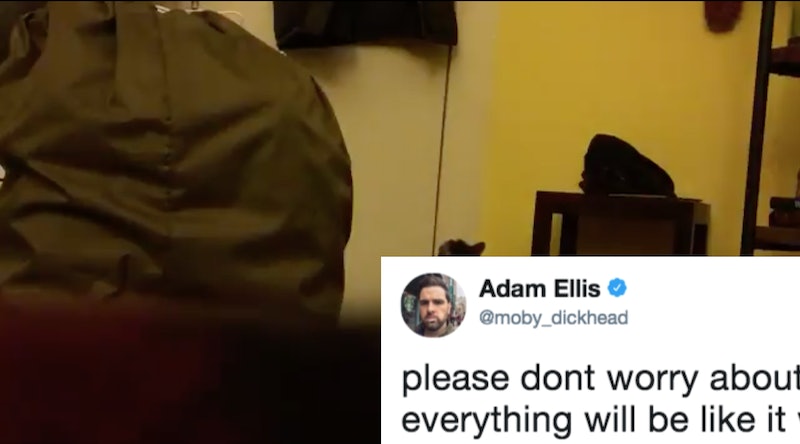 So, uh, about that whole “Oh noes! A ghost is maybe haunting this guy’s apartment!” thing: It definitely doesn’t look like it’s limited to the apartment anymore. Indeed, after the latest update to the Dear David story, everyone is convinced that Dear David took over Adam Ellis’ Twitter account. And probably Ellis’ body, too. And his life. Just… just everything. It’s all David, all the time now. Just David. Doki Doki Literature Club-style.

In case you need a recap, writer and illustrator Adam Ellis has been telling a compelling ghost story on Twitter since August of 2017 — and while it’s clear at this point that the “Dear David” story, as it’s come to be known, is fictional, it’s still riveting, keeping those who have been following along hanging off every word (and image, and video) of each new update.

You’ll call that in the Jan. 2 update, Ellis posted a photo his phone snapped while he was asleep — one that appeared to depict David, the child ghost (or maybe demonic presence) that’s been stalking him since last summer, dropping down on top of him from the ceiling. About two weeks later, a Story appeared on Ellis’ Instagram account featuring a strange, glitched-out image that seemed to show David’s face superimposed on Ellis’. The progression of these two plot points seemed to suggest that David was in the process of possessing Ellis.

After that, the story began to pick up steam — and as it went, it seemed to confirmed the possession theory. Not quite two weeks later, a lone video shot from a low angle appeared on Ellis’ Twitter account showing his cat, Maxwell, meowing at the door. Then, just about a week later on Feb. 3, a tweet reading simply, “everything is fine” was posted. These two tweets stood out for a few reasons: For one, they weren’t accompanied by lengthy threads, thereby breaking the pattern that Ellis’ updates had previously established; and for another, the “everything is fine” tweet lacked any capitalization or punctuation, which ran in the face of Ellis’ typically grammatically-correct style.

The next update after that appeared to be an actual, real-life, personal update from Ellis, reiterating an announcement he had previously made on his Instagram account: He had quit his full-time job in order to strike out on his own. Or… was it an actual, real-life personal update? We’ll come back to that in a bit. In any event, though, the most recent update has clearly put us back into the thick of the ghost story, and the news is… not good.

Like the “everything is fine” tweet from Feb. 3, this tweet lacks proper capitalization and punctuation; additionally, it includes the use of an ASCII-style emoticon. Both of these qualities suggest that Ellis isn’t the one who’s in control right now; as previously noted, he’s always made sure to use proper grammar while tweeting, and what’s more, he’s never had a habit of using either emoji or emoticon.

About an hour later, this video arrived:

It's similar to the earlier video that appeared on Jan. 28: It’s shot from a low angle, and it shows Maxwell meowing at the front door of Ellis’ apartment.

It’s worth noting that the angle in the new video is slightly higher than it was in the older one — but in both videos, the composition of the frame is more or less the same: There’s something big and bulky in the foreground on the left side (in the new video, it looks like a nylon drawstring bag to me), with Maxwell positioned at the back beside the door.

Naturally, everyone thinks that David has fully taken control of Ellis and his Twitter account. In fact, many had pretty much the exact same reaction:

With the occasional variation on the theme:

Some were a little more overt about the situation:

While others opted to take some… precautions:

And, of course, I would be amiss not to highlight my absolute favorite reactions, so first, feast your eyes on this mini-thread:

And then… this. Just this:

But let’s return to the previous update for a moment — the one about Ellis leaving his full-time position in order to work on his own projects. I’ve revised my opinion of this update since it first appeared. I’m no longer quite as certain that it’s solely a personal update from Ellis about his work life; indeed, I actually think it might still be an in-universe update — that is, it's part of the ghost story in a way that blurs the lines between fiction and reality. We do know that Ellis actually quit his full-time job; his announcement on Instagram back in the middle of January made that clear. My change in thinking about the Twitter thread from several weeks later is due in large part to that weird space between two of the words in the third tweet:

If you look closely — or if you copy the tweet’s text and paste it somewhere else — you’ll find that there’s an extra space between “feel” and “good.” This isn’t exactly news; as I pointed out last week, a number of Twitter users picked up on that space immediately:

But here’s why some of us think that it might be notable: While it’s true that an extra space in one tweet might not mean anything all on its own… that’s not the first time we’ve seen one appear within the Dear David story. I didn’t realize this until a couple of days later, but an earlier update — the one from Feb. 3 that (I thought) just reads “everything is fine” — has an extra space, too:

This… does not strike me as a coincidence.

It’s interesting to me that, with the exception of that extra space, the “personal” update uses correct grammar — and also that the language it uses echoes what Ellis had previously posted on Instagram. We already know that David has, uh, visited Ellis’ Instagram page before; could he have picked up this language from there and deployed it here in an attempt to fool us into thinking Ellis himself was posting the Twitter update? Food for thought.

Regardless, the story certainly seems to be barreling towards its conclusion. The updates have been coming much faster now, appearing roughly every three to seven days instead of on the once-every-week-and-a-half-to-two-weeks schedule the whole thing had settled into by October of 2017; additionally, the updates are also occurring at the times that David has typically been the most active — at around midnight, which, you’ll recall, is when Ellis’ cats originally started gathering by the door each night way back at the beginning of the tale.

Plenty of questions remain, of course — Will Ellis be able to regain control over his own body? What’s up with the most recent videos? Why are they being recorded from such weird angles? What the heck is that thing in the foreground? If it's a bag, what's in it? What does David mean by “everything being like it was before?” And what, exactly, is David? A ghost? A demon? Something else? — but hopefully, these questions will eventually be answered, and soon.

In the meantime… does anyone have the phone number of a good exorcist on hand? Because now might be a good time to make that call. Just sayin'.