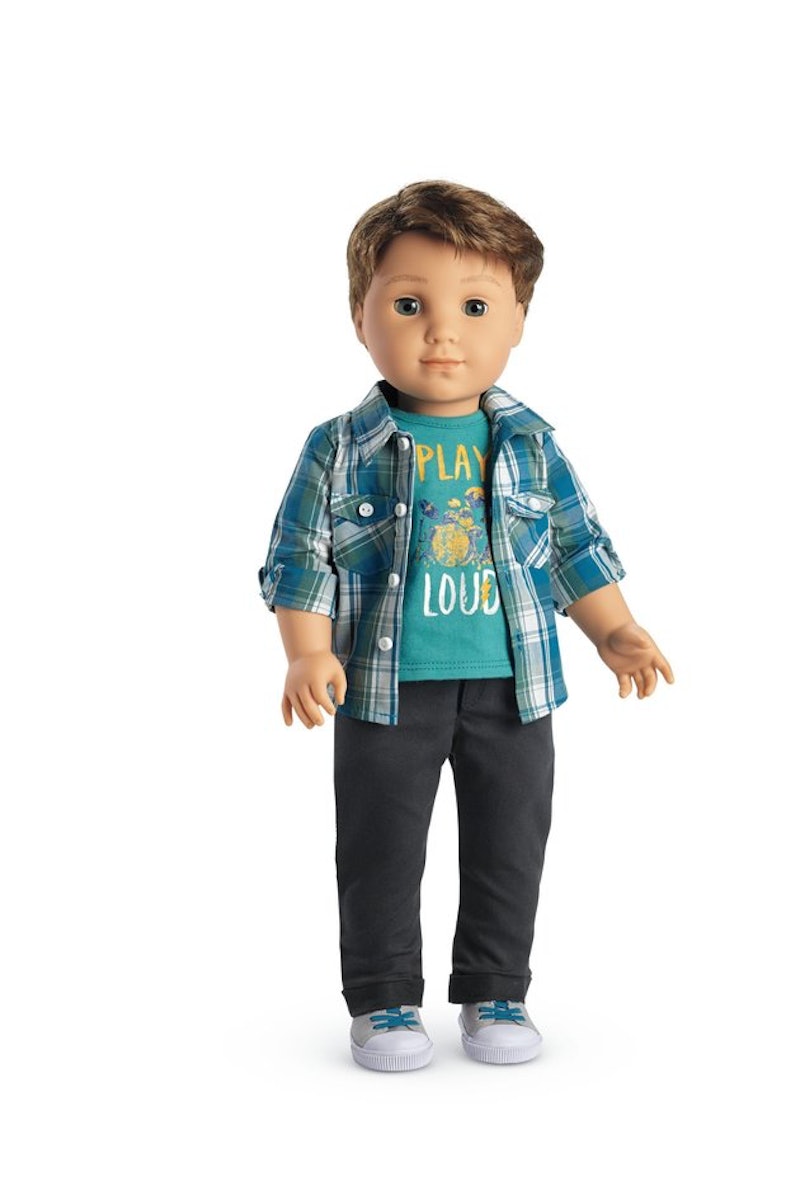 American Girl has made headlines in the past few years for devoting themselves to creating more inclusive, diverse dolls for its lineup, and today the company just announced one more: according to the Huffington Post, American Girl's first boy doll, Logan Everett, has officially hit the scene. (Bustle has reached out to American Girl for comment and will update upon reply.) Logan Everett, an 18-inch doll in the traditional American Girl vein, will hit shelves this Thursday, along with his friend Tenney Grant, a singer-songwriter from Nashville, TN that he plays drums for. Do I smell an original American Girl song between this duo in the airwaves?

“Adding a boy to our lineup has been a number one request for a very, very, very long time,” said Julie Parks, director of public relations at American Girl, to the Huffington Post.

While longtime fans will note that Logan isn't technically the first "boy doll" (I may or may not still have my Bitty Twins propped on my bed back in my childhood home), it is a majorly historic moment for the brand, which has been making exclusively girl dolls from their original narratives since 1986. And according to the company, it's just the beginning of many other more inclusive doll launches to come later in 2017.

Logan's release comes right on the heels of American Girl's 2017 Girl Of The Year Doll, Gabriela McBride, who hit shelves on January 1. Gabriela, whose story is told throughout the course of three books, is a quiet girl in a family of artists who finds that her growing passion for spoken word poetry helps with her chronic stuttering.

Later this year will see the April release of Z Yang, a Korean character who has been featured in videos on American Girl's YouTube channel, and the autumn release of Nanea, a Hawaiian girl living in the World War II era.

In the past few years, American Girl has also made strides in representing broad ranging experiences of girls, expanding their typical hobby lines to include miniature items for dolls like arm crutches, diabetes kits, hearing aids, and service dogs. "American Girl is proud that these and numerous other accessories help a girl create a doll that's as unique as she is—and we will continue to create new products in this important area so that every girl can see herself reflected in her doll," reads a statement on the American Girl website.

The addition of Logan is just one of many exciting inclusions to the American Girl lineup — and he and Tenney be drumming their way into your heart starting February 16!