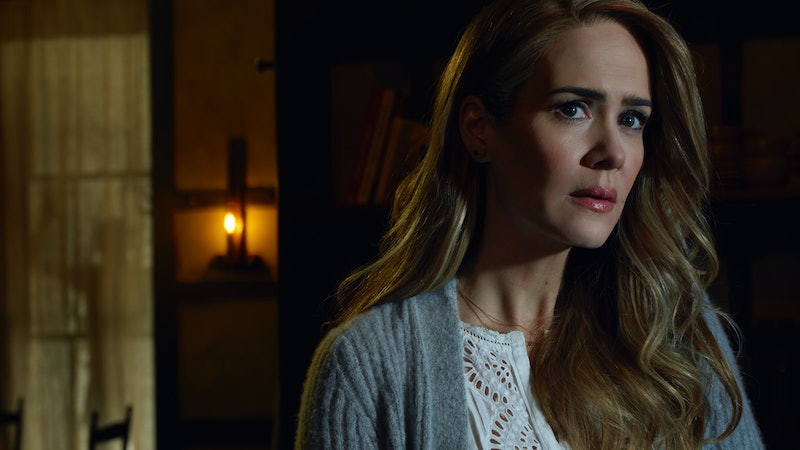 American Horror Story: Roanoke was undoubtedly a divisive season of television, but, whichever side of the debate you landed on, here's some news that fans of the anthology series won't find divisive: American Horror Story has been renewed for two more seasons, as FX Networks CEO John Landraf revealed this Thursday at the Television Critics Association winter press tour.

"American Horror Story launched the modern limited series revolution and — as evidenced by the most recent installment, Roanoke — it remains as vital today as when Murder House stunned audiences six years ago,” Landraf told the assembled reporters. “Each new chapter is a cultural event, beloved for every new twist in imagery, style, cast and plot. We are thrilled that Ryan Murphy, Brad Falchuk and the entire creative team will continue to deliver the groundbreaking, celebrated American Horror Story for years to come."

Given that Roanoke was the show's sixth season, this announcement might lead you to believe that AHS has been renewed through Season 8… but the news is even better than that. AHS had already been renewed for Season 7, which means that this additional two-season pickup guarantees that the show will actually run through Season 9, taking it all the way to 2019.

In honor of those nine seasons of terror, here are nine unused themes that Ryan Murphy & Co. can feel free to steal for future installments of their anthology:

Fans have been clamoring for years for a season set at a summer camp, à la Friday The 13th. It's sort of mind-boggling that, through six seasons of AHS and two of Scream Queens, Ryan Murphy hasn't taken advantage of this most iconic of slasher movie settings. It would undoubtedly make for a younger-skewing season of AHS than usual, but there would still be plenty of roles (instructors, cooks, townsfolk, parents, murderers) for the show's core cast to play.

Another long-gestating idea among the show's fanbase has been a season set in outer space. Granted, this theme would require some futzing with the "American" part of the title, but how cool would it be to see our beloved AHS mainstays battling claustrophobia, space madness, and bloodthirsty aliens?

Some of the best horror movies are set in confined locations that make it difficult for the victims to escape. Similar to the claustrophobic nature of a space station, Murphy could also put all of his characters on a cruise ship with nowhere to run and nothing but miles of water stretching in every direction. Then unleash serial killers, contagious diseases, and tsunamis — and watch the chaos unfold.

Is there anywhere in real life creepier than a morgue? Full of dead bodies, disemboweled organs, and the smell of formaldehyde, there are few locations better suited to a horror show. And once the corpses start getting up and walking around… well, you better keep a scalpel handy. Imagine Six Feet Under with a supernatural twist, and you've got a terrific season of AHS.

Of course, Murphy wouldn't have to venture all the way outside of the Earth's atmosphere to write a season featuring extra-terrestrials. Just set it in Roswell and have the characters slowly unravel a government conspiracy involving aliens, abductions, experiments, and cover-ups. The best part is, it could have direct ties to Asylum and help explain that season's alien storyline, one of the biggest head-scratchers in AHS history.

What could possibly be more ruthless, cutthroat, and scary than a beauty pageant? The cult classic film Drop Dead Gorgeous already illustrated the murderous lengths potential beauty queens (and their stage moms) will go to in order to win; I'm sure Ryan Murphy would be able to crank that dial up to 11 and deliver us the campiest season since Coven.

Tensions are high (Marvel vs. DC), the location is appropriately claustrophobic (so many people crammed into one space), the identities are already obscured (so many masks)… It's honestly shocking that, given the rise of nerd culture in the popular sphere, that AHS hasn't already tackled a season set at a Comic-Con, as the attendees are felled one-by-one by a costumed murderer.

You're walking through a dark room filled with immobile, lifelike mannequins… and any one of them could be a killer lying in wait… If Beauty Pageant would be the cattiest season yet and Comic-Con would be the most fun, then Wax Museum has the potential to be by far the scariest.

Alternatively, Ryan Murphy could choose to tackle a real American horror story: climate change. Like The Day After Tomorrow or 2012, this season would see the characters outrunning tidal waves, freak storms, earthquakes, and more natural disasters as they fight to survive in an increasingly apocalyptic landscape.

What will AHS Season 7's theme be? Will it be one of these ideas… or something we never see coming? Hopefully, Ryan Murphy won't make us wait too long to find out.