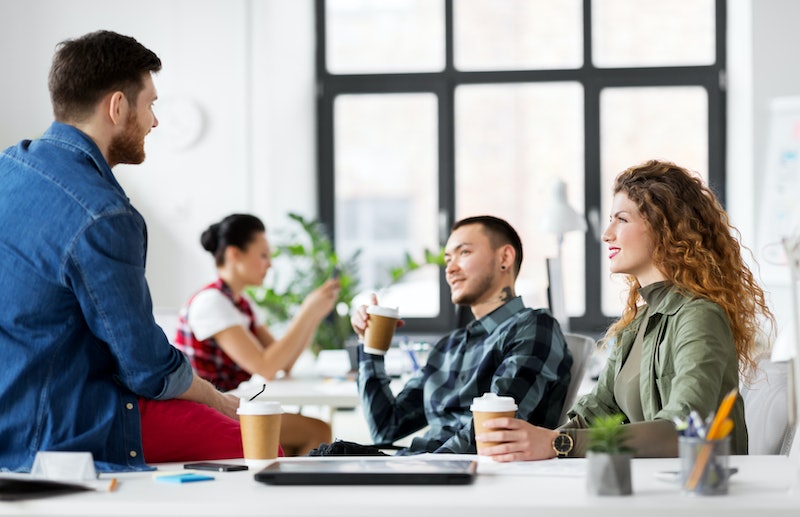 The #MeToo movement has brought the issue of sexual harassment in the workplace to the forefront of the national conversation. But while many people can agree that the alleged actions of political figures and Hollywood stars we've heard about in the last year are atrocious and beyond inappropriate, the definitions of other forms of sexual harassment are still pretty murky for some. And that could be because, according to a poll from NPR and Ipsos, people have different views about what is and isn’t appropriate behavior in the office.

For this survey, Ipsos polled 1,130 American adults online between January 25 and January 30, 2018. They were asked to rate 12 office behaviors from one to seven, with the numbers corresponding to “always,” “mostly,” and “sometimes inappropriate” “it depends;” and “sometimes,” “mostly,” or “always appropriate.” They were also asked whether they’d seen the behavior and whether they’d done the behavior themselves.

The vast majority of respondents — 97 percent — said that spreading rumors about a co-worker’s sex life was inappropriate. Three other behaviors also got over 90 percent for an “inappropriate” response: discussing co-worker’s sexual preferences and history (93 percent); deliberate touching, leaning, or cornering (93 percent); and telling sexual stories or jokes (91 percent).

But it’s the other end of the spectrum that’s most interesting — the end where there’s no clear consensus on what’s OK and what’s not. For example, asking an equal-rank co-worker on a date was about evenly split, with 30 percent saying it was inappropriate, 40 percent saying “it depends,” and 28 percent saying it’s appropriate. That’s especially interesting when you consider the fact that 15 percent of couples from a 2017 report said they met their significant other at work. Another survey, from the website Vault.com, reported that even more people have probably been getting it on with co-workers. They found that 51 percent of respondents had engaged in an office romance at some point in their lives.

So I guess I would answer “it depends” on that one. But I wouldn’t be in alone in my age group: while approximately 60 percent of both men and women over 55 thought it was inappropriate to ask about a co-worker’s social life, only about 30 percent of 18 to 34-year-olds felt the same.

Another interesting finding of the poll was that while most people of both genders were in agreement about the level of inappropriateness of many of the behaviors, young men between the ages of 18 and 34 were much less likely to think something was always not OK. Only 51 percent of men in that age group thought it was “always inappropriate” to talk about someone’s sexual preferences or history at work, compared with 72 percent of women of the same age, 74 percent of men between the ages of 35 and 54, and a whopping 88 percent of women over 55.

Additionally, only 30 percent of young men in that same age group thought it was inappropriate to call an adult female co-worker girl, babe, sweetie, or honey. While this might be a generational thing — 55 and 69 percent of men and women over 55, respectively, didn’t think it was appropriate — 54 percent of women of the same age group were not with it. So maybe let’s stay away from that one?

The conversation about sexual harassment — like the conversations about sexual assault and gender equity — is going to continue to evolve. And while it’s easy to fall into thinking that we all should be on the same page, polls like this illustrate the fact that different people are often coming from different perspectives. In the fight to combat sexual harassment, it’s up to each of to determine where on the spectrum from inappropriate to appropriate we think things fall — and then advocate for our beliefs. It’s the only way change happens.