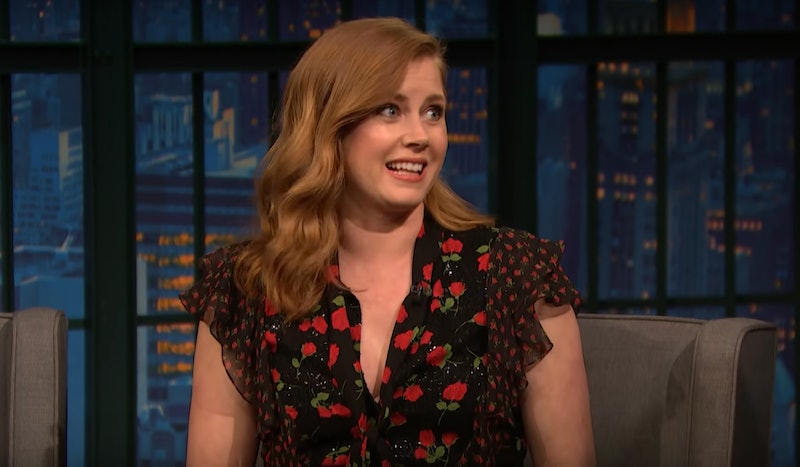 Everybody does it. Some more than others. It's doubtful that anyone has made as many accidental phone calls as Amy Adams, though. Seriously, it's impressive. On July 31, Adams apologized for accidentally dialing two of her very famous friends on multiple occasions during an interview on Late Night With Seth Meyers, E! News pointed out.The public apology came after the actor admitted to having inadvertently called one of those famous friends with her face more than 300 — yes, three hundred — times over the course of two months. See? Impressive.

Before diving into her current projects — Adams currently stars on HBO's Sharp Objects — Meyers told the Oscar nominee that he understood she wanted to take a moment for "a PSA." Adams laughed and replied, "I do, I do need to apologize to a couple of people." Uh-oh.

"I've been meaning to do it over several shows and appearances," she continued. "But, Christina Applegate ... she's at the top of my call list and I have fat cheeks, and I keep accidentally calling her when I smile during other phone calls," Adams confessed. "And then I don't say anything and I hang up, which is really rude. But it's been like, 300 hundred times, I think." Oh, wow. That's ... wow. That's really something.

Meyers then clarified, "300 times over the course of—?" The year? Several years? Over the course of her friendship with Applegate, which — in order for this to at least sound kind of reasonable — has spanned several decades? "Like two months," Adams replied. Wow, OK. Two months, huh? That's, um ... yeah, that's a *lot* actually.

"You abort before she picks up?" Meyers asked. "I do, it's not nice," Adams revealed. "So, I apologize." But, wait — there's more. "I think I FaceTime Jen Aniston on accident, too, from my bed," she said. This is starting to sound like a problem. All Meyers could keep saying was, "wow," and well, same.

Meyers mused that both Applegate and Aniston have probably realized that, by now, Adams has been repeatedly calling them by accident. "After about 30 times, I would imagine," the actor concurred. "I'm going to say 'hi' next time [it happens]," she promised.

No word yet on how Applegate and/or Aniston are taking their fickle-phoning friend's apology, but she did just hold herself accountable for any future accidental dialings on national TV. So there's that, at least.

Adams and Meyers then diverted the conversation toward her career on the small screen, as per Sharp Objects. She's primarily been known for her big-screen roles, but the actor admitted, "some of [the TV shows she'd done] got canceled, and I was also fired from ... three shows," she hesitated to say. Girl, you are not doing your reputation any favors right now. (Kidding.)

The Sharp Objects star has been nominated for five big-screen Oscars over the course of her career, but is already garnering praise for her role on HBO. "It was fantastic [to do TV]," Adams told TV Insider. "I really like expanding a character and developing her over eight episodes. It gives you a much more rich history."

Speaking of expanding, perhaps Adams should expand her Hollywood team to include someone who's a little more skilled at using phones from time to time? Just a thought. Then again, fans would miss out on these amazing anecdotes.