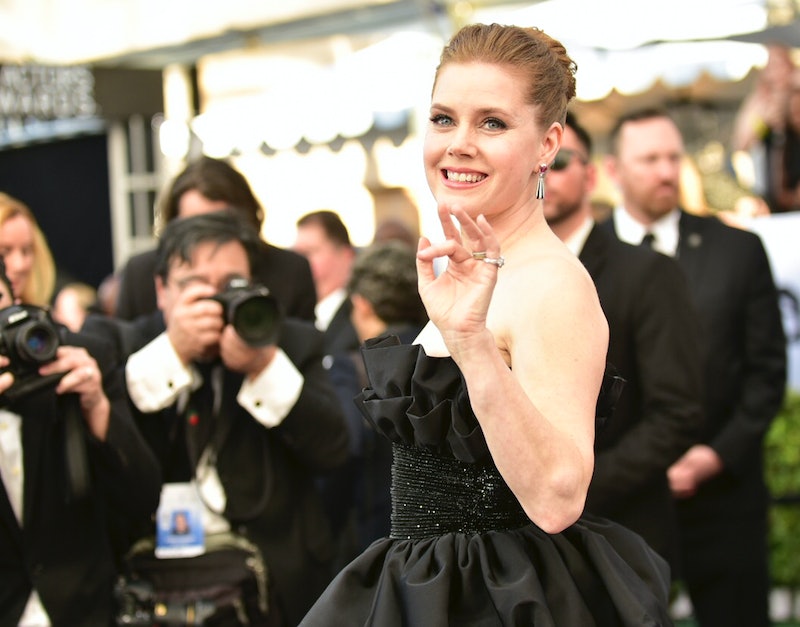 No matter how much we know that awards shows can be unpredictable and fickle, it doesn't make it any less frustrating when an incredible performance goes unrecognized. Sunday night's Screen Actors Guild Awards wasn't immune to that irritation, and featured one award that proved particularly controversial for fans. After a stunning performance in HBO's Sharp Objects, Amy Adams was snubbed at the SAG Awards, and fans immediately flooded Twitter with their dismay.

Patricia Arquette took home the award for Outstanding Female Actor in a TV or miniseries for her role in Escape at Dannemora, beating out fellow nominees Adams, Patricia Clarkson, Penelope Cruz, and Emma Stone. Exasperation on Adams' behalf doesn't feel like an insult to Arquette's performance, but perhaps a testament to how much Adams touched viewers as Camille Preaker. She played an alcoholic journalist on the hunt to solve murders occurring in her hometown, all while dealing with demons from her childhood, a tendency to self-harm, and a mother who became more and more sinister as the series went on.

It was a raw, emotionally heavy performance that carried the show on its shoulders, leading to rave reviews and a fan base that was hanging on every line. Those same fans were not shy about their displeasure when her name wasn't called.

Adams didn't just lose out on her Sharp Objects nomination — she also received a nod for her role in Vice in the supporting actor category, but Emily Blunt took home the award instead for her performance in A Quiet Place.

Adams has long been underappreciated when it comes to awards recognition. She also was nominated for Sharp Objects at the 2019 Golden Globes, but lost to Arquette there as well. Adams was outstanding in the 2016 sci-fi drama, Arrival, for which she also earned a Golden Globe nod, but still fell short of a win. The Academy then failed to recognize her Arrival role with even a nomination at the 2017 Academy Awards — a move widely regarded as a shocking oversight.

Adams has been nominated for nine Golden Globes, and has thankfully taken home two — for her roles in American Hustle and Big Eyes. But despite six career Oscar nominations beginning with 2005's Junebug, she's never taken home the Academy Award for any of her roles. Needless to say, hardcore Amy Adams supporters are itching for any award she can get her hands on — not only because she always delivers a deserving performance, but because the recognition feels long overdue.

There are still opportunities for awards to come Adams' way soon. She's nominated at the upcoming Academy Awards for Vice, and Sharp Objects will likely be up for Emmys at the 2019 ceremony. Even past that, it seems like a given that Adams will continue to thrive — the actor is poised to continue to deliver impressive performances, and there's no telling what awards are in her future. Adams is one of the most consistently compelling performers in Hollywood, regardless of what awards may or may not come her way. Her SAG snub just added more fuel to her fans' fire.

More like this
Paul Mescal, Man Of Mystery
By Samantha Leach and Heather Hazzan
Olivia Wilde Addresses *Those* Florence Pugh & Shia LaBeouf Rumours
By El Hunt and Sam Ramsden
Here’s Everything Coming To & Leaving Netflix In October
By Jake Viswanath
Morfydd Clark’s Party Trick Is Only Impressive To “People Outside Of Wales”
By L'Oréal Blackett and Maxine Harrison
Get Even More From Bustle — Sign Up For The Newsletter