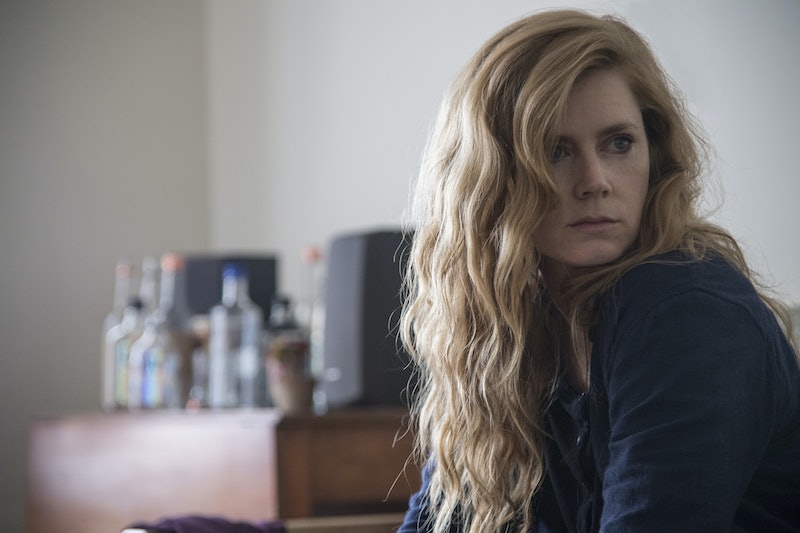 In Gillian Flynn’s debut novel Sharp Objects, which has been adapted into an HBO miniseries premiering July 8, there's a lot to unpack. The novel explores the cyclical nature of self-harm, as well as how trauma recovery can look incredibly different from person to person. The story follows crime reporter Camille Preaker (Amy Adams) as she returns to her small hometown of Wind Gap, Missouri, at the urging of her editor to cover what appears to be a string of serial killings. For Camille, this homecoming isn't a merry one, but rather a series of triggering events that push her to drink more, flirt again with self-harm, and make poor decisions when it comes to her family, her love life, and her work. What follows is a twisting narrative that’s part mystery, part thriller, and all horror.

Given the inherent voyeurism in depicting trauma on screen, I worried that Camille’s struggles would be sensationalized once they got the HBO treatment. Far too often, the way television depicts trauma, unhealthy coping mechanisms, and mental health struggles is extremely insensitive, especially when the characters are women. (The fact that 13 Reasons Why has been renewed for a third season on Netflix after mental health experts have repeatedly criticized the show for failing to portray suicide responsibly says all that needs to be said.)

Though those unfamiliar with the book wouldn't know it until the final minutes of Sharp Objects' first episode (light spoiler), Camille is a serial cutter, a fact that she states without theatrics in Flynn’s novel. She carves words into her skin until everything but her neck, face, hands, and one single spot in the center of her back are covered in white scars; some months before returning to Wind Gap, she undergoes treatment at a rehabilitation center where anything and everything sharp is taken away as she’s taught new coping mechanisms. It's a story that's easy to see being shocking in a small-screen adaptation, but at what cost?

For the first 45 minutes of the first episode, Sharp Objects convinces the viewer that Camille’s primary coping mechanism for dealing with her traumatic past is alcohol. This is a well-placed red herring: For viewers who haven’t read the novel, they have no idea that Camille is hiding so many scars under her clothes; for viewers who have, there’s a creeping sense that the series may not deal with this integral aspect of her story at all, or will deal with it irresponsibly. Because I’m familiar with the steps that cutters take to hide their scars, I immediately recognized that Camille wears only jeans, boots, and long-sleeved shirts and sweaters in neutral, dark colors, even in the height of summer. But those less familiar with this tactic who haven't read the novel may not initially notice.

So when we see Camille strip down and climb into the bath at the end of the pilot, revealing the scars that cover almost every inch of her body, it's meant to be a quiet shock. The camera pans over her arms and shoulders, revealing the episode title, “Vanish,” in stark white letters on her skin.

Watching this series, especially as a recovered cutter, is hard. Initially, I was revolted by this moment. However, after some reflection, I conceded that this moment is as close to the matter-of-fact declaration Camille makes about being a cutter in the novel as the series can possibly get without using narration. Instead of voiceover, Sharp Objects uses its own visual language involving flashbacks and hallucinations to clue the viewer in to what's really going on inside Camille's head. And there's a lot in there: Camille's trauma is deeply connected to her family and her hometown, to the death of her sister when she was a child and her relationship with her mother.

It’s hard to watch Camille deal with uncomfortable situations in which she’s forced to reveal her scars to people like her half-sister or her lover. It’s tough to watch her mother act as if cutting is some personal failing of Camille’s, rather than a direct response to the trauma she dealt with growing up. I can’t say that Sharp Objects portrays these issues responsibly, because there are some jarring directorial decisions that left me having to pause and catch my breath, even having read the novel just months ago. But I can say that the series is very focused on portraying the complexities of recovery, not just for Camille but for everyone in Wind Gap. The murders of two preteen girls affect the entire population of the small town; in the series, we get to see how people other than Camille are coping. Spoiler alert: nobody is OK.

Sharp Objects is co-written by two women: Marti Noxon, who acts as showrunner for this and for Dietland, and Flynn, who authored the novel. When exploring issues of women’s trauma, it’s essential that women be given the helm. Series star Amy Adams also acts as an executive producer alongside Noxon and Flynn, which establishes a level of understanding for what is going on with Camille in particular, and all of the women in the series more broadly.

I can’t speak too much to what goes on with the other characters in Sharp Objects without giving away major spoilers, but I can say this: centering a story on women’s trauma without exploiting it for the betterment of men is desperately needed in media, and for the most part, Sharp Objects is careful not to exploit trauma for the sake of sensationalizing character development.

We have an obsession with dead girls, a phenomenon that Alice Bolin explores in her new essay collection and that comic creator Gail Simone once dubbed “women in refrigerators.” Women are constantly killed off to provide emotional catalysts for men to jump into action or somehow grow as people. It’s a tired trope, and one that Flynn takes and twists in Sharp Objects by focusing the entire story on women and how they commit violence against themselves and each other when dealing with trauma.

These stories are not unfamiliar to us, not even in the way they are presented in this surreal HBO series. One thing, though, is for certain: Sharp Objects demands that we face the trauma of its characters head-on, that we sit in the discomfort of it, and that we recognize how truly winding, imperfect, and difficult recovery can be. It also demands that we acknowledge hard truths, like the fact that for many people, recovery is an ongoing, lifelong process. For some, it never happens at all.