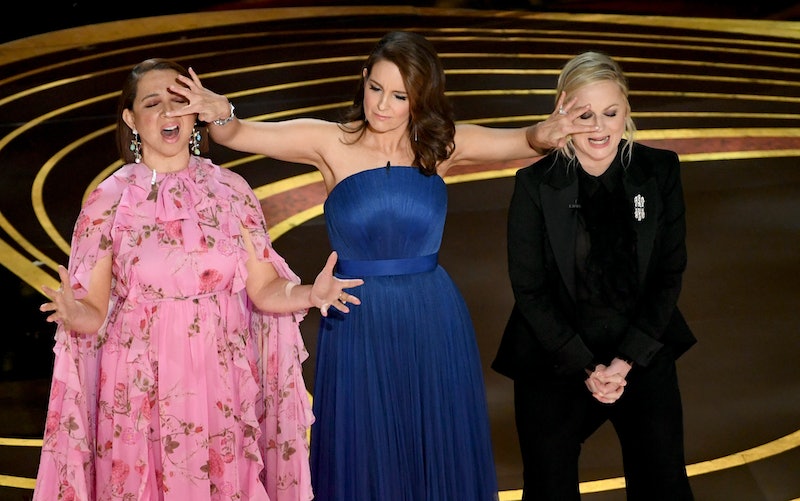 For the first time in almost 30 years, the Academy Awards has decided to go host-less for the entirety of the telecast this year. The last time that happened was in 1989, and things were ... interesting, to say the least. This time, in the place of a standard monologue, Amy Poehler, Tina Fey, and Maya Rudolph opened the 2019 Oscars with a mini-monologue of sorts — and fans are already clamoring for them to host the whole thing again next year.

Poehler, Fey, and Rudolph arrived onstage to an eruption of applause, and their short, yet sweet introduction to the ceremony did not disappoint. They also made it very clear that they were not, in fact, the hosts, which was kind of a bummer, because they would have undoubtedly killed it.

"We are not your hosts, but we’re going to stand here a little too long so that the people who get USA Today tomorrow will think that we hosted," Fey explained. Rudolph then clarified, "So just a quick update for everybody in case you’re confused, there is no host tonight, there won’t be a Popular Movie category, and Mexico is not paying for the wall."

The trio kept the jokes coming, and touched on everything from A Star Is Born — Rudolph dramatically sang a few notes from "Shallow" — to the ill-fated Fyre Festival — Fey joked that everyone in the audience would be getting one of the now-infamous cheese sandwiches.

The audience at the Oscars seemed to be loving the non-hosts' mini-monologue, and fans on Twitter were beyond thrilled. So thrilled, in fact, that tons of people are already clamoring for the trio to *actually* host next year.

"Here's a crazy idea: Let Maya, Tina, and Amy host the whole show given that they are marvelously talented and actually funny?" writer Roxane Gay wrote. "The smartest thing the Oscars could do would be to have Amy, Tina & Maya keep appearing on stage throughout the entire broadcast denying they’re hosting," wrote another viewer. Even Reese Witherspoon chimed in at one point, tweeting, "Wait! Why are Amy, Tina and Maya not hosting this whole show?!"

On Dec. 4, 2018, it was announced that comedian Kevin Hart would be hosting this year's Oscars. "I will be sure to make this years Oscars a special one," he wrote on Instagram, adding, "now it's time to rise to the occasion." Shortly thereafter, though, some of the comedian's old tweets were unearthed, and his anti-gay sentiments and homophobic terminology raised major concerns.

Ultimately, the controversy led Hart to step down from the hosting gig. "This is because I do not want to be a distraction on a night that should be celebrated by so many amazing talented artists," he wrote in a tweet on Dec. 6. "I sincerely apologize to the LGBTQ community for my insensitive words from my past."

While the Academy could have likely found a replacement for Hart in plenty of time, they instead opted to go without a host at all — for the first time since 1989, according to Variety. As it turns out, though, the show seems to be going on without a host — and without a hitch — so far. Thanks, in great part, to Poehler, Fey, and Rudolph. Bow down to the not-host queens.