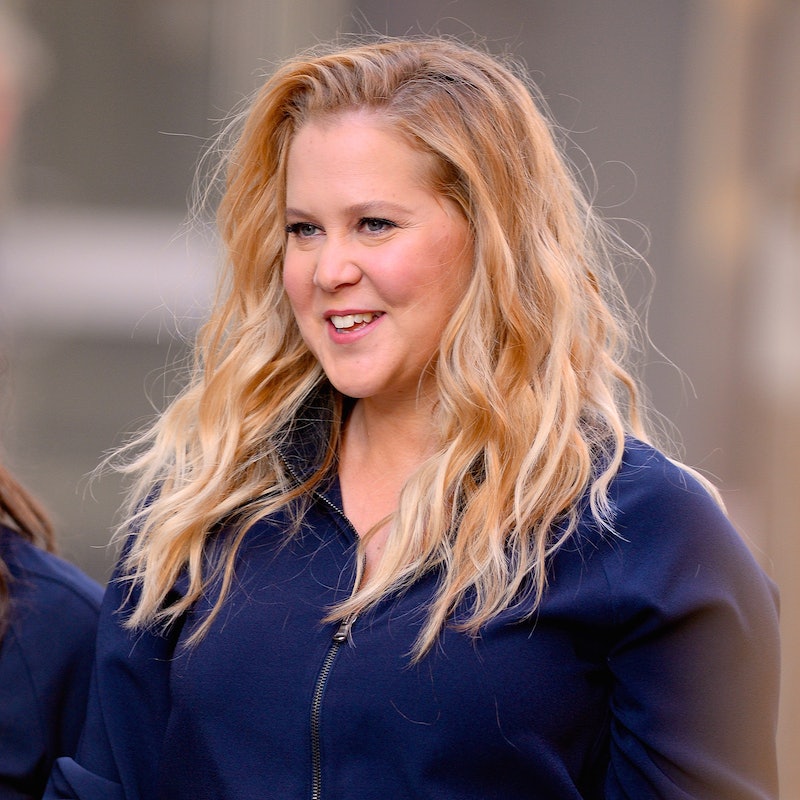 Despite making a few jokes at reality TV's royal family's expense over the years, Amy Schumer praised the Kardashians for their kindness and openness on Instagram after the Season 17 finale of Keeping Up with the Kardashians. In the season finale, Kourtney Kardashian wrestled with whether or not she wanted to continue being on the show, before all of the sisters (minus Kylie Jenner) and their mom Kris Jenner dressed up as each other for a friendly family roast. Like the rest of the family's fans, Schumer was watching, and the episode seemed to inspire her to send some appreciation the Kardashian-Jenner clan's way.

On Instagram, the comedian shared a photo from the finale that featured the family dressed up as each other, and she added a caption that was 100 percent joke free. "I watched the season finale of @kuwtk and it was a true delight," Schumer wrote. "I have made a million jokes over the years. But I love that family." She continued, noting that this famous family has always been willing to laugh at themselves. "They are good, kind girls and I appreciate how open they are," she added. "They are such great sports and have always been very kind to me and my family and are the first one to laugh at jokes about themselves."

She then gave a special shout out to Kim, who responded in the comments. "You are so sweet and this post is so kind! thank you!!!," the reality star wrote. Fans of Schumer and the Kardashians were loving the mutual appreciation fest with Vanderpump Rules star Stassi Schroeder commenting, "I LOVE THIS POST." Model Emily Ratajkowski added, "Hell yes," while Real Housewives star Kyle Richards shared a red heart emoji.

There may be nothing but love between the Kardashians and Schumer now, but that wasn't always the case. The I Feel Pretty star wasn't kidding about making her share of Kardashian jokes. In 2015, she hosted Saturday Night Live, and in her opening monologue she suggested that the family wasn't exactly role model material. "We have to be a role model for these little girls, because who do they have? All they have, literally, is the Kardashians," she joked. "Is that a great message for little girls? A whole family who take the faces they were born with as a light suggestion? And we used to have Khloé, you know? Khloé was ours. But then Khloé, she lost half her body weight. She lost a Kendall and we have nothing."

At the time, Khloé wasn't amused. She responded, per Entertainment Tonight: "No need 2 tear down others just 2 make urself feel bigger. It actually makes u quite small. I'm on a health journey. I don't care 4 the hate." Schumer also famously crashed Kim and Kanye West's photo during the Time 100 red carpet earlier that year, but the comedian later shared that Kim thought the move was funny.

All joking aside, it seems Schumer has nothing but admiration for the Kardashian family, and there ability to take a joke. Perhaps she can guest star on Season 18.