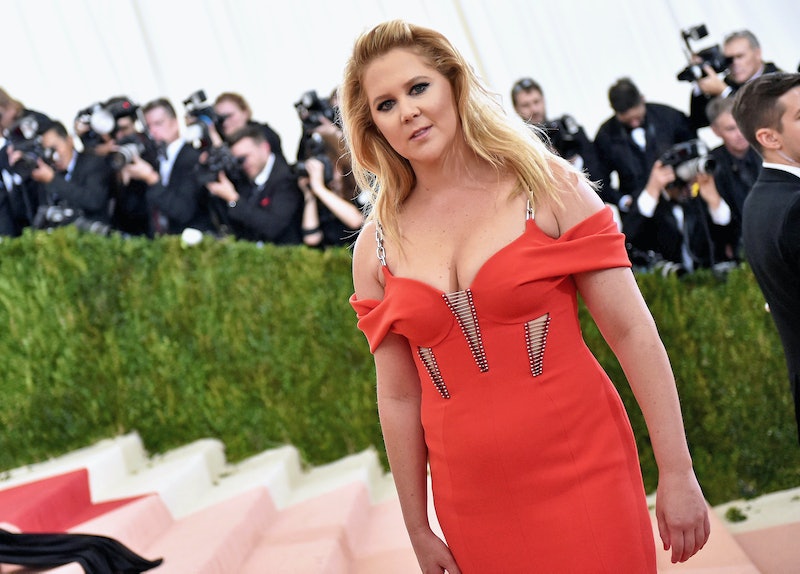 Just recently, Kim Kardashian stunned the world (again) with a risque milk shower scene in Fergie's new video "M.I.L.F.$," which features a group of moms like Chrissy Teigen and Ciara tempting the neighborhood "Milfman." It's a music video that has raised many eyebrows and made many headlines, and now, Amy Schumer has posted a selfie inspired by "M.I.L.F.$". Already, some are interpreting the post by the comedian as Schumer giving Kim K some Instagram shade — but that's not quite fair, considering that the selfie seems to be all in good fun.

On Saturday, Schumer posted the selfie to her Instagram account, in which she's seen holding a frozen burrito on one of her eyes and also holding a cookie aimed at her mouth. The caption reads: "Saturday! Icing my face with a frozen burrito, swollen from eating popcorn while eating a cookie #milfmoney #balmain." The snap is relatable and hilarious in that classic Schumer way, but as for what this pic has to do with Kim K? Well, the #balmain hashtag references one of the Kardashian family's favorite designers, and the #milfmoney hashtag is what seals the fact that this photo is indeed inspired by or meant to parody Fergie's new video — "Milf money" and "Milfshake" are two common words used in the "M.I.L.F.$" song.

But fans shouldn't jump to conclusions that this is Schumer's way of throwing shade at Kardashian or any of the other famous moms in the music video. I think it's clear that the photo was meant to be a joke, since all of the mothers in the video are portrayed as glamorous and sexy, while Schumer was having what she felt was an unsexy, injured moment. (But it can be argued that frozen burritos are pretty baller.)

Schumer does have a history of parodying and pranking Kim K, though, but it's always been lighthearted and fun. Take for example, when Schumer fell in front of Kardashian and husband Kanye West at the TIME 100 Gala red carpet in 2015. "All the reporters were going crazy and it was Kim and Kanye, just standing there, owning it, being short and important" Schumer told People . "And I think falling is the funniest thing, so I took a dive in front of them." Schumer even asked Kardashian if she and her sisters were hiring at their boutique Dash, according to E! News.

See? This new photo is likely just Schumer at it once again with her witty sense of humor.