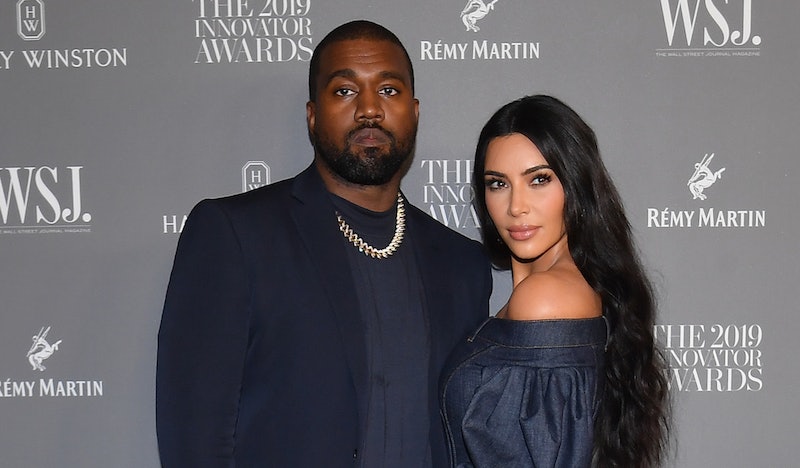 Those who keep up with a certain annual Kardashian Khristmas tradition may have noticed something missing in Kim Kardashian’s 2019 Christmas card: the expansive Kardashian-Jenner clan. On Friday, Kardashian unveiled her annual holiday card alongside husband Kanye West and their four children North, Chicago, Saint, and Psalm West. In their most casual look yet, the Kardashian-West clan is donned in matching gray sweats and white socks while situated on a stairwell. She captioned the photo, "The West Family Christmas Card 2019."

In the picture, Psalm makes his family Christmas card debut alongside his brothers and sisters. North and Saint are all smiles, while Chicago is held by dad Kanye. While the card features the same monochromatic look as last year’s all-white family picture, it appears that the Kardashian-Jenny family Christmas card tradition with the entire crew may officially be a thing of the past. And it doesn't exactly come as a huge surprise: Kim actually declared that the tradition was over last year after the debut of the 2018 Kardashian family Christmas card, which featured sisters Kim, Khloé, Kourtney, and Kylie with their children True, Stormi, Chicago, Saint, North, Penelope, Reign, Mason, and niece Dream.

At the time, Kim revealed that the 2018 card only came together at the very last minute. The family initially had no intention of coordinating a photo after the elaborate planning of the 2017 Kardashian family card that was unveiled in fragments each day that led up to Christmas. The planning caused a lot of stress and resulted in a tense fight between Kim and Kourtney, which was documented in an episode of Keeping Up With the Kardashians.

In an interview with E! News in December 2018, Kim said the “dramatic” events of the 2017 Christmas card really “f*cked us over.” She said of retiring the tradition, “Kris Jenner has given up. She just is like, 'I don't have the energy to wrangle all my kids anymore, and their kids.’” A few days later, Jenner echoed her daughter’s sentiments and told Us Weekly that she was all for retiring the stressful tradition. "We take so many photos together that we’re so excited about, always doing photo shoots and stuff. We have a photo shoot on Thursday, so there’s always something."

Before the events of 2017 Christmas card-gate, the Kardashian-Jenner clan became notorious for their extravagant family Christmas cards throughout the years. In 2011, the family went full-on glam in a tuxedo-themed shoot that also included Caitlyn Jenner, Rob Kardashian, Scott Disick, and Khloé’s then-husband Lamar Odom. In 2012, the family opted for a more minimalist, all-white look and Kourtney’s daughter Penelope made her debut. Then, in 2013, the Kardashian-Jenners diverged from minimalism and unveiled a colorful, carnival-inspired card without their husbands. Later, the family switched it up with a 2015 Christmas card that only featured children North, Penelope, Maison, and Reign.

While Kardashian family Christmas cards are a thing of the past, something tells us Kardashian photoshoots will remain aplenty.