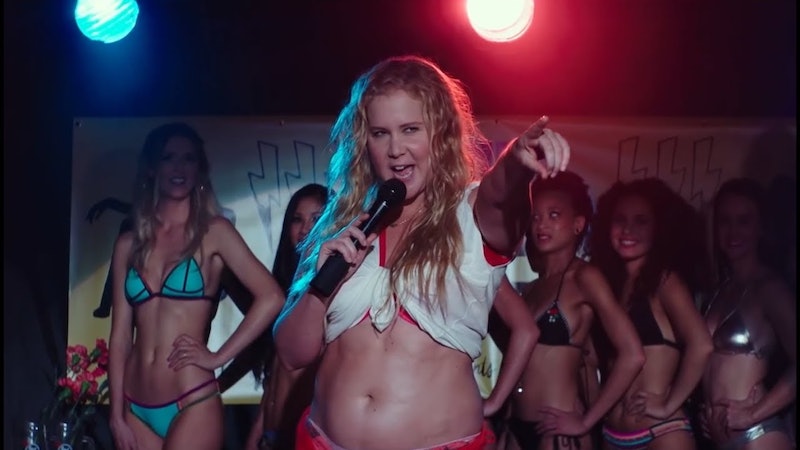 Amy Schumer's new comedy I Feel Pretty, premiering nationwide on April 20, has already started plenty of conversations about women and confidence. After watching the trailer, some were concerned that the movie reinforces negative ideas about weight as it relates to self-esteem, or the stereotype that women value looks above all else, or that Schumer's character "shouldn't" feel insecure (Amy Schumer herself addressed this on Bustle, which you can read here).

After seeing the movie, I recognize where those criticisms are coming from. As someone that checks the same boxes as Renee — white, chubby, a hair away from conventionally attractive and prone to embarrassing herself — there were parts that I related to. For each woman who sees themselves in this character, there will be another for whom her presentation as ugly and unattractive feels like a slap in the face. No matter which side you fall on, though, the more compelling message lies not in Renee's looks or other people's perception of her appearance: It's the attitudes and responses to her confidence (and the confidence of other female characters) that most, if not all, women watching will find relatable. They speak to a certain truth that the movie never explicitly acknowledges: If you're a woman, having confidence (or a lack thereof) makes you a target of skepticism and judgment — no matter what you look like.

I Feel Pretty tells the story of Schumer's Renee, a woman so deeply mired in routine self-loathing that she stands for prolonged periods in front of a mirror with the explicit goal of disgusting herself. She has friends, sure, but her lack of confidence has prevented her from moving forward in her career and love life. During a SoulCycle class — which serves as a perfect environmental catalyst for someone's manic vision quest — Renee falls off her bike and hits her head. When she wakes up, she no longer sees herself as ugly. Instead, she's "undeniably pretty," a "Jenner-Kardashian level" bombshell that exists exclusively in her own mind. Her friends, colleagues, eventual boyfriend, and the audience see the original Renee from start to finish — there are no body doubles, no second actors playing Renee 2.0. Suddenly, she has next-level confidence: She wears what she wants, flirts with who she wants, and goes out for the job she wants, all because she perceives herself as beautiful, and therefore, entitled to all of it.

In the movie, the joke is that she's not actually that pretty, and therefore her confidence is unwarranted. For me, though, it has nothing to do with Renee's face or body, and everything to do with her gender. Fat, thin, black, white, blonde, brunette, whatever — if a woman is unapologetically confident, people tend to react with skepticism, confusion, and sometimes even anger. Renee's love interest is absolutely beside himself (not to mention embarrassed) that she would be confident enough to enter a bikini contest. At work, her new colleagues react with snobby petulance when she greets people with a huge smile and an assertive "hello." Even Renee's friends aren't sure how to handle her confidence at first — despite their unwavering support, they're still skeptical of its origins.

If you're a woman, confidence (or lack thereof) makes you a target of skepticism and judgment — no matter what you look like.

It's not just her, either. Michelle Williams plays Avery LeClaire, a conventionally pretty beauty heiress with a squeaky voice. Despite her beauty and station, Avery is routinely condescended to by her grandmother and brother when she tries to assert herself. She's never given the opportunity to show the kind of confidence that the movie argues someone like her — thin, rich, pretty — should feel entitled to. In fact, whenever she does, she's cut off at the knees.

Additionally, Renee encounters a fellow SoulCycler played by Emily Ratajkowski, a doe-eyed, beachwaved, flat-stomached model who eventually admits that she struggles with self-esteem. Because she's conventionally beautiful, Renee flat out refuses to believe her. Her disbelief sends a strong message, especially in comparison to Williams' Avery. Both women are conventionally attractive in the same ways, but one is chided for asserting herself, while the other is disbelieved for not being able to do so. The real punchline is that both of these women represent the same woman, the one that most of us have been to different people at different times: Pretty enough to display confidence or too pretty to ever lose it.

It's this idea that I relate to much more than anything else in the film. When I've admitted that I hated myself, more people than I care to think about tsk-tsked as if I deserved it, or offered options for what I could change to feel better. Once I changed my mindset and allowed myself to be confident, others dismissed me as arrogant, "putting on a show," or worse, crossing a boundary that I wasn't entitled to cross because of my size. By contrast, a very thin, conventionally beautiful friend of mine recently let the people around her know that she was feeling insecure, and was met with a response along the lines of, "What gives you the right?" Of course, this was just one month after a colleague accused her of acting like she was "too good" for everyone.

In so many ways, being a woman is a constant battle for autonomy and the right to exist outside of the expectations set forth for us, in terms of both appearance and attitude. It's frustrating because there's no way to actually win: No matter what you look like, your confidence (and sometimes, vulnerability) is always, eternally, forever-and-a-day up for analysis and debate. Being asked to routinely defend the reasons for both over-confidence and lack of confidence is what's really at the heart of insecurity. Just like Renee, our appearance inevitably gets to set a benchmark for how we're allowed to feel — and how we're treated for feeling that way.

More like this
Lin-Manuel Miranda & Tituss Burgess React To 'Little Mermaid' Casting Backlash
By Radhika Menon
14 Women To Watch This Oscar Season
By Marina Watts
An Extremely Messy Ranking Of What Actually Happens In 'Don't Worry Darling'
By Chloe Foussianes
Paul Mescal, Man Of Mystery
By Samantha Leach and Heather Hazzan
Get Even More From Bustle — Sign Up For The Newsletter