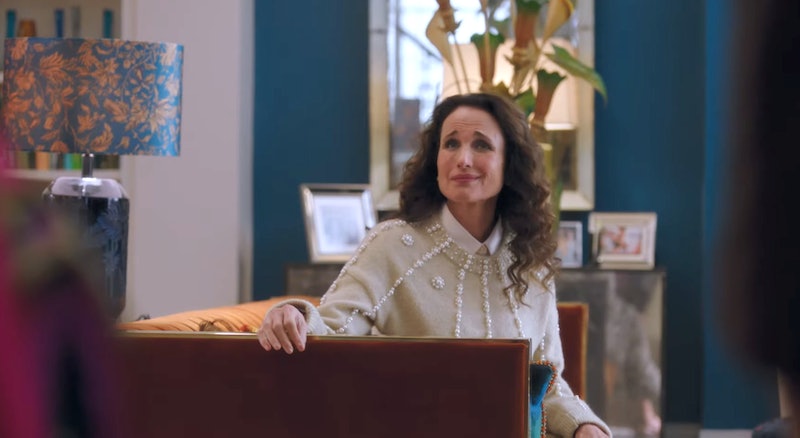 At the start of Hulu's Four Weddings and a Funeral, American-born Ainsley seemingly has the perfect life in London with her fancy townhouse, her own design housewares store, and her banker fiancé Kash. But when Kash leaves her at the altar, Ainsley is forced to reevaluate her life. And things get more complicated after her close-minded, wealthy Texas mother comes back from Ainsley and Kash's honeymoon in Bali. "Your father and I think you should come home with us," MacDowell's Mrs. Howard tells her daughter. "You need a fresh start, away from that man."

Ainsley doesn't want to leave London — it's where all of her American friends live after they made a pact to relocate to the UK — but Ainsley's parents have other plans in mind. "Listen, your father and I have been happy to help you out the last couple of years. But after that extravagant wedding, we have reached our limit," Mrs. Howard says. And because the only reason Ainsley can afford her lavish store and home is because her parents pay for them, her mother gives her an ultimatum — move back to Texas or get cut off financially.

MacDowell is only onscreen for a few minutes, but she clearly has fun with the role: despite being the bearer of bad news, her Texan drawl makes her sound sweet as pie. Later in the episode, her character calls Ainsley to giver her another chance. "I found the most adorable space for your new shop and it's right down from your father's office. You could drive to work together," she says. At first, it seems like Ainsley is being a spoiled brat when she rejects her mother's generous offer once again. But after Mrs. Howard makes prejudiced comments about Kash's Muslim religion and says "Howard women just do not have a head for business," you start to understand why Ainsley wants to live a continent away from her mother.

Mrs. Howard is vastly unlike MacDowell's character in the Four Weddings and a Funeral film. Sure, Carrie toys with Charles emotions by sleeping with him while engaged to another man, asking him to go wedding dress shopping with her, and then showing up to his wedding to confess she's separated. But through it all, Carrie is a charming character who maintains her likability as she tries to figure out what her heart really wants — which is a far cry from Mrs. Howard.

The only real connection between the two characters seems to be their American origins. Where Carrie is from isn't directly mentioned in the movie, but Charles' roommate Scarlett ends up married to Chester — a man from Texas. And in the Red Nose Day Four Weddings and a Funeral sequel, Grant's Charles confirmed that MacDowell's character is southern when he called her "my southern peach, non-wife Carrie." That's most likely a reference to MacDowell's real-life birthplace of South Carolina or an allusion that Carrie is from Georgia, but a Texan popping up in London still feels like a vague nod to the original film.

The writer of Four Weddings and a Funeral, Richard Curtis, serves as an executive producer on the Hulu show, so MacDowell isn't the only one connection to the original movie. And while ultimately, the two projects tell very different stories, MacDowell's cameo is a nice homage to the film that started it all.

More like this
12 ’90s Movie References You Missed In 'Do Revenge'
By Radhika Menon
Margot Robbie Breaks Her Silence On *That* Viral 'Barbie' Moment
By Maxine Harrison
The Trailer For The Whitney Houston Biopic Has Twitter Feeling Heated
By Radhika Menon
Paul Mescal, Man Of Mystery
By Samantha Leach and Heather Hazzan
Get Even More From Bustle — Sign Up For The Newsletter