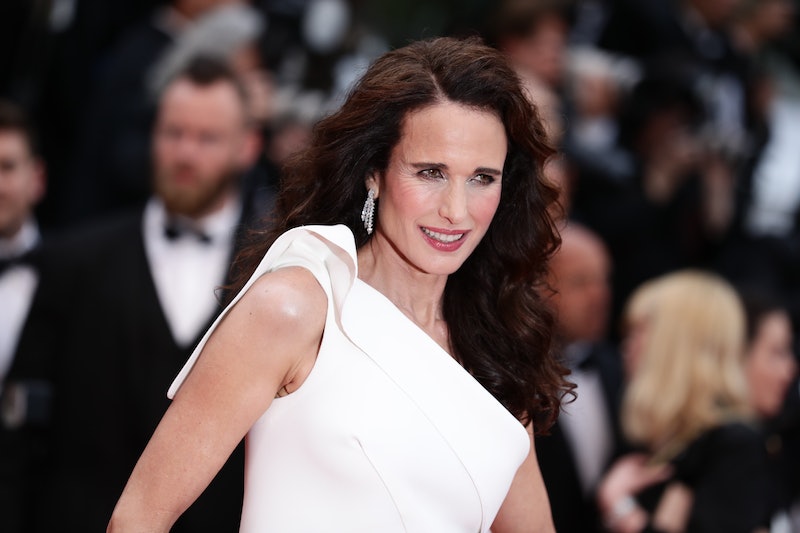 When Four Weddings and a Funeral came out in 1994, the most recognizable star involved — for Americans at least — was Andie MacDowell. So it's only right that MacDowell is in the American TV adaptation of the film. With her involvement, it's fairly clear what MacDowell thinks of the Four Weddings and a Funeral show. She hasn't really said much about it in interviews, but it's safe to say MacDowell wouldn't have agreed to make a guest appearance if she wasn't at least a little bit into the new story.

Plus, when the news of the Four Weddings and a Funeral show broke in November 2017, MacDowell took to Twitter to repost an announcement from The Hollywood Reporter. Although she shared the link with no comment, it sure seemed like she was excited. Then, in November 2018, Deadline reported that MacDowell will have a guest star appearance in the series as Mrs. Howard, the mom of new character Ainsley. MacDowell shared a photo of her trailer from the set in December 2018 with the caption, "Lucky me."

In the original movie, MacDowell played the main love interest of Hugh Grant's character Charles. Throughout the film, Carrie and Charles run into each other at (you guessed it) four weddings and a funeral before committing to one another in a rain-soaked romantic scene on the streets of London. A mini-sequel that original screenwriter Richard Curtis wrote for Red Nose Day in May 2019 revealed that 25 years later, Carrie and Charles are still happily not married together at their daughter's (Lily James) wedding. MacDowell, Grant, and the rest of the cast reprised their roles for the charity sequel.

But MacDowell's appearance in the new Four Weddings and a Funeral has nothing to do with her original character's storyline. The show instead follows four American friends in London: Nathalie Emmanuel's Maya, Brandon Mychal Smith's Craig, John Paul Reynolds' Duffy, and Rebecca Rittenhouse's Ainsley. Rittenhouse discussed MacDowell's role during a recent interview with The Wrap, saying "She makes a really nice cameo as my Texan mother. She does not play her character from Four Weddings, but it's a nice little homage to that. Plus, MacDowell's "Lucky me" comment could have been a nod to the original movie, since when Carrie and Charles first sleep together, they do so at an inn that Charles mistakenly calls The Lucky Boat.

Other than her one Instagram post, MacDowell hasn't said anything else about the Four Weddings show. Even when she appeared on The Late Late Show with James Corden on July 29 — two days ahead of the first four episodes of Four Weddings dropping on Hulu — she didn't mention the series, and instead focused on her new movie Ready or Not, which she was there to promote.

That being said, MacDowell is active on social media, so it's worth checking out those platforms for anything she says about the show once it's released — in addition to, you know, actually watching her in it.