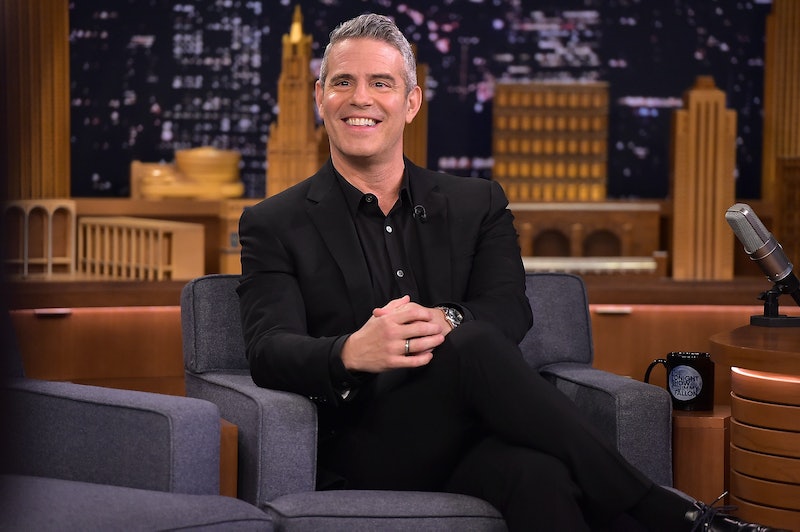 Andy Cohen welcomed his first child earlier this year, and it's safe to say the baby is perfectly falling into place in the Bravo host's life. Andy Cohen's baby and his dog are getting along super well, if his latest Instagram post is any indication.

A kiss from the family pet is a pretty good seal of approval, and it looks like Cohen's beagle, Wacha, is giving the baby just that. "Many have asked how @therealwacha & his brother are getting along. Here you go! 💋 🐶 #loveyourpetday," Cohen captioned his post on Wednesday. His hashtag is right on time, too: Feb. 20 is National Love Your Pet Day (although, really, you should love your pet year-round).

Cohen welcomed his son via surrogate on Feb. 4. In an Instagram post announcing the happy news, Cohen revealed that his son is named Benjamin, after the Bravo star's grandpa. "He is named after my grandfather Ben Allen," Cohen wrote on Instagram. "I'm in love. And speechless. And eternally grateful to an incredible surrogate. And I'm a dad. Wow."

Since the birth announcement, Cohen has shared a few more updates about his little one. It looks like the baby has already been on his first flight — in what looks like a private jet, no less. And in a photo shoot for People, Cohen and his son look like they're already having some major bonding.

Wednesday's photo isn't actually the first one Cohen has shared of Ben and Wacha together. On Valentine's Day, Cohen called his son and dog his "two valentines," sharing a picture of him holding them both. But in that photo, Ben is turned away from the camera, while Wacha is facing forward. So it was hard to know from that picture whether the dog and the baby had bonded yet. But based on Cohen's new picture, it looks like they definitely have.

Cohen announced in December that he had a baby on the way, during a heartfelt moment on Watch What Happens Live with Andy Cohen. He told the audience at the time,

It looks like his life has been filled with plenty of joy since then, especially after Ben's birth. Of course, Cohen's Bravo family also helped him prepare for Ben's arrival. Cohen's baby shower guest list featured plenty of Real Housewives, including Teresa Giudice, Kyle Richards, and Ramona Singer. Cohen's pals are definitely supportive of this next stage in his life, and it's nice to see updates from Cohen about how being a dad is for him so far.

Earlier this week, Cohen shared another sweet photo of Ben, too, this one featuring the tot in his crib. It looks like the Watch What Happens Live host is an expert at baby swaddling, not to mention at choosing adorable crib bedding.

Judging by the photos Cohen's been posting lately, it looks like he, Ben, and Wacha are one happy family together. Hopefully, this is the first of many photos he'll share of the two "brothers" enjoying some quality time with each other — it doesn't have to be Love Your Pet Day for those pictures to be adorable.