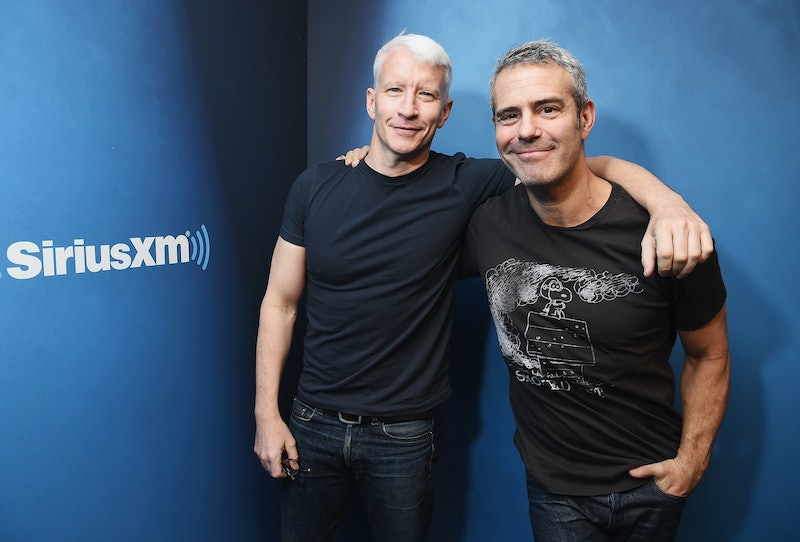 Bravo fanatics just cannot get over the epic Real Housewives-filled baby shower that Andy Cohen had in California over the weekend. However, that wasn't the only celebration for baby Cohen. Andy Cohen's second baby shower was thrown by his celebrity friends on the East Coast.

Cohen revealed the second baby shower in a Jan. 29 Instagram post. He shared photos of Kelly Ripa, Sarah Jessica Parker, Anderson Cooper, and his friends Bruce Bozzi and Sarah Green. He was rocking a hat decorated with ribbon and a sweatshirt with the word "dad" on it.

The Watch What Happens Live With Andy Cohen host told his followers,

"I had a heart-boner for days after this crew threw me an equally epic affair on the East Coast. I feel loved & it’s all going to the [baby]. Thank you @brucebozzi @kellyripa @sarahjessicaparker @jackie__greenberg. (Worth noting that Anderson made the ribbon hat and did a beautiful job!)"

In response to his Instagram post, Ripa commented, "Still think we got the assignment wrong after seeing that other show." As any good friend would, Cohen responded with "you got it right babe" along with an emoji crying with laughter.

Real Housewives of Beverly Hills cast member Erika Jayne commented on the post: "civilized." That might be an accurate comparison to the Cohen's baby shower with Real Housewives cast members dancing on tables and doing splits to celebrate Cohen's impending fatherhood.

Even though the king of Bravo shared these photos after his baby shower with the Real Housewives stars, it makes sense to assume that his East Coast bash actually happened before. This is because Cohen temporarily relocated to Los Angeles in preparation for his son's birth. He has been filming Watch What Happens Live With Andy Cohen episodes since January 14.

The Real Housewives shower was very public with so many of the cast members in attendance, documenting the day with photos and videos on social media. In contrast, his east coast party seemed to be a more intimate gathering with close friends. As of this moment, no one else even posted any photos from that day. This is in stark contrast to the highly-documented Real Housewives gathering.

Cohen and Cooper have been close friends for a while. They travel for their AC2 tour together. The duo also hosts New Year's Eve on CNN together. In fact, Cohen announced his baby's sex during the 2019 New Year's Eve broadcast.

Cohen told the viewers, "This is the biggest year for me." He announced, "It’s a boy and I got to tell you something, I cannot wait to meet this boy." Cooper chimed in to reveal, "I've known about this for a long time."

During that New Year's Eve broadcast, Cohen revealed that he would be aa father "in about a month," which means that he will welcome his son into the world very soon. This baby is already surrounded by a lot of love and he hasn't even been born yet. Will the two baby showers start a trend for his future life events? What's next? Two first birthday parties? Now, that would be iconic.