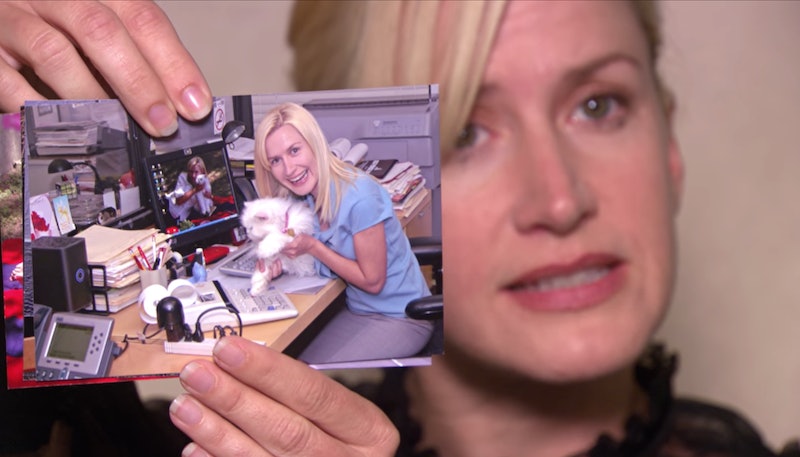 True Office fans know that while Michael's antics, pranks on Dwight, and Pam and Jim's relationship were a huge part of the show, the more minor, supporting, characters often gave the leads a run for their money. One smaller, but equally important character was Angela's favorite cat, Sprinkles, who unfortunately met a grim fate in the Season 4 episode "Fun Run" when Dwight may or may not have put her in the freezer while she was still alive. Well, it turns out that Sprinkles (R.I.P) actually has the sweetest backstory of how she came to be such a prominent minor character on The Office, and it all has to do with actor Angela Kinsey's impressive improv skills.

According to Kinsey, who chatted with Bustle on the phone in November, Sprinkles' origin stemmed from an improvised moment in the pilot. She says Ken Kwapis, the director of that episode, told her that Angela should pass out papers to her fellow officemates while in the background of the first episode. "'Make a loop passing out papers,'" Kinsey recalls Kwapis saying.

She took her task seriously. So seriously, in fact, that it led to the creation of Sprinkles. She ended up designing a birthday party invitation for Sprinkles on a Post-It, which she remembers had the drawing of a cat and read, "You're invited to my cat Sprinkles' birthday party." After Kinsey passed out the invites as Angela, her real-life BFF Jenna Fischer took the fake birthday party even further and put it into the pilot.

Kinsey recalls, "Jenna, as Pam, thought that [the invitation] was funny and she improvised the line, 'Did you get an invitation to Angela's cat’s birthday?'"

In the pilot, Pam actually says to Jim, "I have an important question for you. Um, are you going to Angela's cat party on Sunday?" Jim replies, "Yeah, stop. That is ridiculous."

Even though Jim may have thought a party for Sprinkles was "ridiculous," he actually didn't even receive the special birthday invitation in the first place. Angela excluded Jim on purpose — and all thanks to Kinsey's creative mindset. "My backstory was that [Angela] would think Jim would make fun of it, so I didn’t invite him," she explains.

To this day, Kinsey is surprised how much Sprinkles the cat took off. She says, "Here’s a thing I’m just doing in the background, giving myself busy work as an actor, and then Jenna improvises off of it and then that becomes Sprinkles! R.I.P. Sprinkles."

Despite Sprinkles' tragic death, she was never forgotten, even on set. Brian Baumgartner, who played Kevin, adorably saved that initial Post-It throughout the show's nine seasons. According to Kinsey, Baumgartner taped her Post-It invite on the glass partition between Kevin and Angela's desks the entire time. She says, "When we wrapped the final episode of the whole series, he gave me that Post-It note and I have it."

Based on this story about Sprinkles and other moments of the cast reminiscing about The Office, it's clear why fans would want the comedy rebooted. Kinsey says she would be "so on board," but only if the entire cast and co-creator Greg Daniels, who she calls "truly a brilliant mind of comedy," were a part of it.

Although, she does recognize it would be difficult to "replace what it was," nor would she want to do that. For her, The Office is a "standalone" and Kinsey has complete trust and faith in Daniels to create a reunion that doesn't recreate what was, but rather "complements" it.

Who knows if an Office reunion would ever happen, but if it doesn't, the comedy still has so many wonderful memories. Even Kinsey and Fischer recently reenacted a scene involving Sprinkles. The cast is clearly willing to relive the series over and over again, which is wonderful in itself.