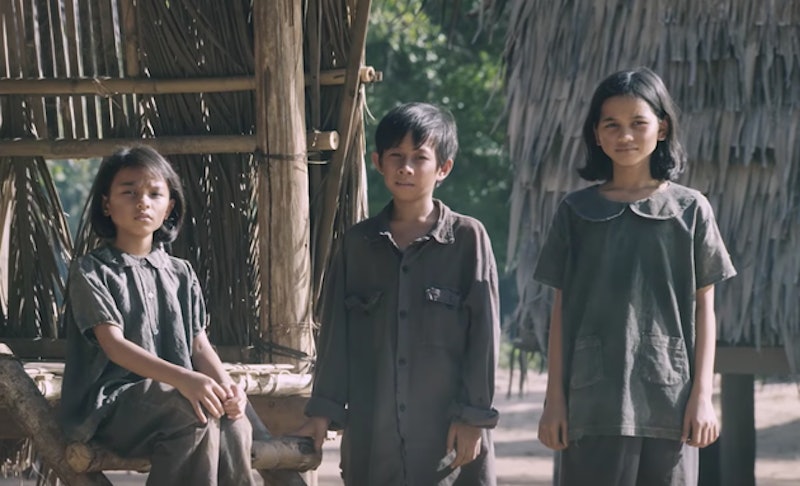 If you've already watched the powerful first trailer for Angelina Jolie's First They Killed My Father, it may have raised questions. The nature of the tragedy the film depicts isn't clear in the trailer; there are hints at military brutality, but no explicit violence in the short. The biographical thriller was adapted from Loung Ung's 2000 memoir of the same name, which explores her childhood living in Phnom Penh when the Khmer Rouge army stormed the city. But who were the Khmer Rouge?

According to Al Jazeera, this was the name given to the Communist Party of Kampuchea, who ruled Cambodia between 1975 and 1979. Their aim was to establish Communist rule in a class-free society that would be funded by an agrarian (or agricultural) economy. This sounds innocent enough, depending on your take on Communism. However, the reality of achieving this society involved genocide and brutal social engineering, as the Peace Pledge Union reports that the Khmer Rouge targeted "all intellectuals and educated people" they perceived in opposition, and that the "ill, disabled, old and very young" were driven out of their homes. Sean Bergin's book, The Khmer Rouge and the Cambodian Genocide, places the death toll at "almost two million" (for context, a fifth of the population) and explains that this figure was due to a number of different factors.

This included Pol Pot emptying cities, sending residents to the country, and forcing city dwellers and intellectuals alike into carrying out “backbreaking agricultural labor.” As a Khmer (Cambodia's "dominant ethnic group"), he also wanted to eradicate so-called foreign influences in the country and persecuted “ethnic Vietnamese, Thai, and Chinese Cambodians.”

According to the book The Scene of the Mass Crime: History, Film, and International Tribunals, action was swift. The day after the Khmer Rouge gained power and arrived at Phnom Penh, the city was "completely evacuated." Residents were accused of being “contaminated by capitalistic values” and had to be re-educated via being sent to fields and work camps. According to the BBC, torture centers were also a brutal reality of the party's reign, with the S-21 jail in Phnom Penh, Tuol Sleng being used to imprison approximately 17,000 men, women, and children over the course of the four year regime.

Since Ung's father was a government official and they resided in the country's capital city, they would have been a target for the new regime. However, as we know from the First They Killed My Father book description, at least in the literary version of the story, the writer's family left the capital and moved from village to village to "hide their identity" and "former life of privilege." If the movie stays true to its source material, this also suggests the bulk of the film will be set in a work camp, since Ung herself was trained in a camp for orphans as a child soldier, which explains the shots of children in uniform working the land.

If the film sheds light on this tragedy, then it should make for vital viewing. Over 40 years later, this horrific period in Cambodia's history hasn't been put to rest. After over a decade of legal action against leading figures in the Khmer Rouge, there have only been three convictions. So, if you're interested in educating yourself about one of the darkest moments in modern history, this could be a good place to start.