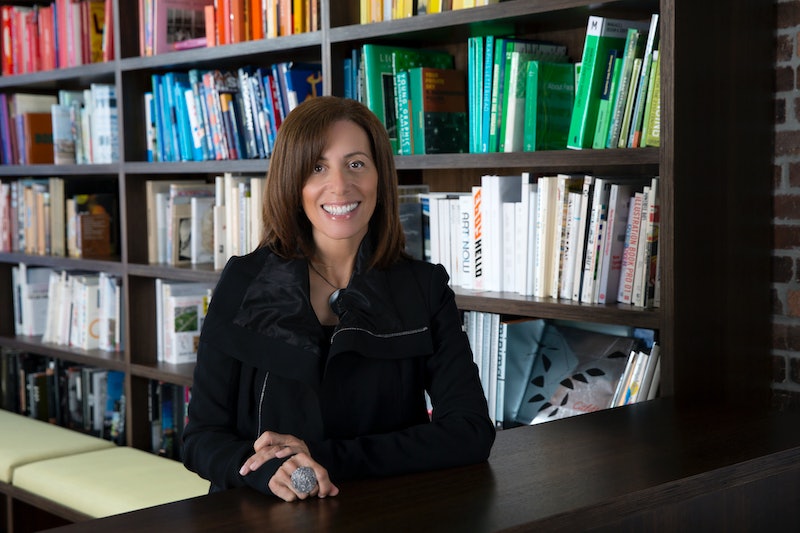 In Bustle's Quick Question, we ask women leaders all about advice — from the best guidance they've ever gotten, to what they're still figuring out. Here, Ann Lewnes of Adobe shares how she carved a creative career out of the world of tech.

On a Wednesday morning in April, I’m sitting across from Ann Lewnes, Adobe’s Executive Vice President and Chief Marketing Officer, in a conference room at Adobe’s New York office, listening to her tell me about road-tripping in her Honda Civic out to Silicon Valley, back when it was "orange groves and semi-conductor companies."

“I’m from New York, a total city kid,” Lewnes tells Bustle. She graduated from Bronx Science, a STEM-focused high school, then Lehigh University in Pennsylvania. “I went to this engineering school where I was a journalism and political science major. I was immersed in technology, surrounded by technology, but a very creative person. … I very, very much wanted to be a journalist.”

Lewnes switched course when she graduated in the mid-‘80s, into the middle of a pretty serious recession. “I had two roommates who were engineers and had moved to Silicon Valley, so I drove my little Honda Civic to Silicon Valley. Literally nothing was there.” There, she was offered two jobs: one at a lifestyle magazine, and one at a little company called Intel. (Yes, the Intel with the catchy, SVU-like jingle you remember from the ‘90s. We’ll get to that in a second.)

She went with Intel on the advice of her dad. "It was like a sea of engineers and me,” she says, laughing. She was working on the communications team when Dennis Carter, then Intel CEO Andy Grove’s right hand, suggested creating a campaign around microprocessors, aka the parts that make a PC work, rather than the PCs themselves. Lewnes’ team successfully marketed the microprocessors with the now-iconic Intel Inside campaign. (You can definitely hear it in your head, can’t you?)

“Fifteen years later, I woke up and I had worked on this very important campaign,” Lewnes tells Bustle. By the time she left Intel for Adobe, after 20 years, it had grown from a billion dollar company into a company worth $40 billion. But Lewnes was excited to tackle the next phase of her career. Now, after 12 years at Adobe, Lewnes has leveraged her vast experience inside some of the world's top companies to create a culture that values creativity and respect as much as innovation.

Here, Lewnes tells Bustle about her daily schedule, the advice she still needs, and the extremely relatable way she turns her brain off at the end of the day.

AL: My first boss at Intel gave me such good advice. He said Ann, don't go to the mat for everything. I get super passionate about things, it's my nature. I would say save yourself for the things that really, really, really matter. I try to educate my team on that as well. The other thing that I think is really important for everyone (but even more so for women in some cases) is to advocate for yourself. But I tell my sons this all the time. That is the most important way to navigate your career because even if you have a great mentor, advocating for yourself is always going to trump that.

What’s something you still need advice on?

AL: There are so many things I need to learn. One thing is spreading yourself too thin. Having boundaries, personally and professionally, is really hard for me. You'll never be successful if you don't prioritize. And it's still hard for me because I want to do a lot of things, and when you become more successful, people ask more of you because they want to learn from you. They want more time from you and they want your opinion on something. And it's hard to be able to do all those things and you'll exhaust yourself if you accept too many things, but I still have a lot of trouble saying no.

What’s the worst piece of advice you’ve ever received?

AL: I can't think of the exact worst piece of advice. The thing that I would say that I would never encourage anyone to do is to not be themselves. When I first went to Adobe, it was so culturally antithetical to Intel. Intel was just a very rough and tumble kind of place, very direct. When I went to Adobe, it was completely different, extremely kind and courteous. For a year, I didn’t feel comfortable being myself. I said to my husband, I don't think I can work here unless I start to really be me. And so I went to work and I started to be me. It was the turning point for me, quite frankly, because it's very hard to constrain yourself.

How do you pump yourself up before a big presentation?

AL: I practice a lot. I really do. I remember a presentation very early in my career that I made to some senior customers, and there was a senior executive from Intel. At the end of the presentation he just handed me a little piece of paper that said, “you said ‘um’ 30 times.” It was really a moment for me to say that I really need to practice. I think if somebody is going to sit in an audience and listen to you, you really should give them the benefit of having been well-practiced.

How do you turn your brain off at the end of the day?

AL: I watch television every single night. No matter what. I could be finished working at midnight, or doing something with my family. But I put an hour of television into my life no matter what. I loved Breaking Bad, I loved The Americans, I watched This Is Us. I watch American Idol still. I think it's really important if you're in marketing, you have to know what's going on culturally. I'm on my phone 24 hours a day. I wish I wasn't as much, but I try to keep plugged in.

What’s your advice for someone entering the industry now?

AL: The skills that you need are the same skills that, that we have always needed. For me, that was being a good communicator. I tell my sons that whether or not you want to be a writer, in the end you're going to be advocating for yourself. You're going to always need to be able to communicate. Those are recession-proof skills.