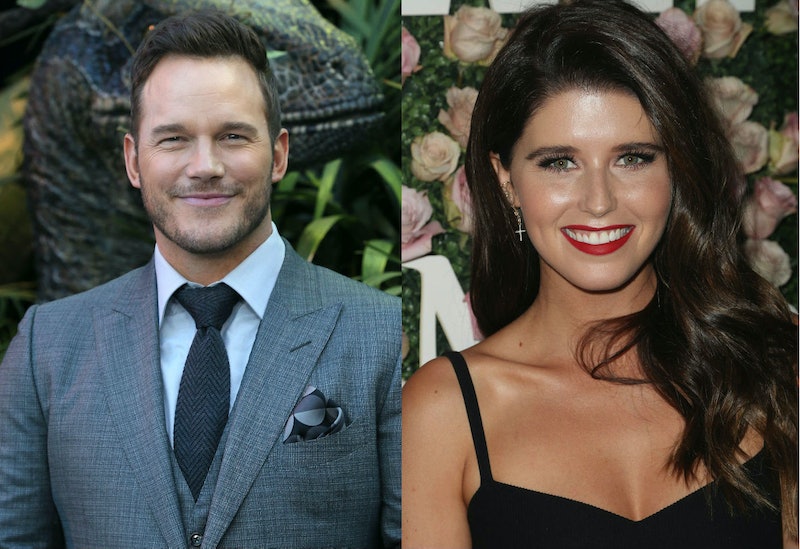 It sounds like this celebrity couple rang in 2019 the right way. Chris Pratt and Katherine Schwarzenegger's New Year's celebration was all about family and living it up in the sun, according to E! News. The duo reportedly traveled to Cabo San Lucas, Mexico with family in tow, proving not only how much they enjoy being around their loved ones, but what family means to them both.

Per E! News, Schwarzenegger's mom, Maria Shriver (who reportedly introduced her daughter to Pratt), her siblings, and Pratt's son, Jack, with his ex-wife, Anna Faris, were all in Cabo to bid adieu to 2018. It sounds like they all had a blast together, too.

"On New Year's Day everyone hung out together by the pool and the beach celebrating the first day of 2019," a source told E! News. Apparently, Pratt gets along really well Schwarzenegger's family and isn't afraid to joke around with them, either.

"Katherine and Chris both spent time swimming and laying out next to each other," the source also said. "Chris seems very close with all of the family and like one of the gang. He was joking around with Katherine's brothers and having fun. They all shared a lot of laughs and good times." The source added, "Chris and Katherine took photos together and shared a few kisses."

It certainly sounds like they had a very happy New Year, indeed.

Ever since the Marvel star and author were first romantically linked in June 2018, they've pretty much been inseparable. They didn't officially confirm their relationship until December of last year. On Dec. 13, 2018, Pratt posted an adorable collage featuring Schwarzenegger on Instagram for her birthday. This was the first time they shined a personal light on their romance and based on the pictures it's clear they have so much fun as a couple.

"Happy Birthday Chief!" Pratt began his birthday post for Schwarzenegger. "Your smile lights up the room. I’ve cherished our time together. Thrilled God put you in my life. Thankful for the laughs, kisses, talks, hikes, love and care."

As you can see below, she commented, "i love you." Yeah, they aren't hiding their romance anymore. That said, the Guardians of the Galaxy actor and Schwarzenegger have yet to openly discuss their relationship in detail. It seems like they prefer to keep their personal life as private as possible, and who can blame them, especially when they're both in the public eye?

In addition to cute photos and "i love you's", there have also been engagement rumors circulating. In November 2018, a source told Us Weekly, "They'll be engaged soon." The same insider also said Pratt's planning on popping the question in the near future and that he's even been turning down work "so he can spend time with [Schwarzenegger]." Neither Pratt nor Schwarzenegger ever commented on the reports.

However serious they may or may not be, there's no denying Pratt and Schwarzenegger aren't just enjoying alone time, but also with their families. From Schwarzenegger spending time with Jack to the couple hanging with Arnold Schwarzenegger, to loved ones reportedly joining them in Cabo for New Year's, family is definitely a major priority for them — and it's super sweet.