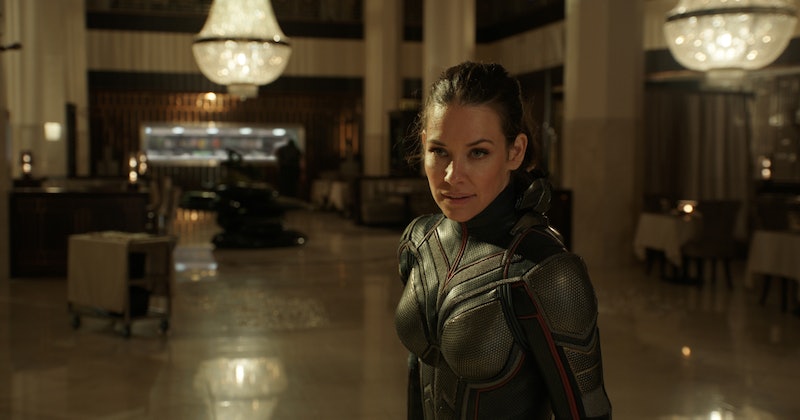 Small spoilers ahead. Marvel really did it. The company finally put a female superhero in the title of a feature film (and at the front of all promotional materials). Despite the fact that we've known the title of Ant-Man & The Wasp since 2016, seeing the name swathed across giant posters of Evangeline Lily's The Wasp in a superhero pose, taking the power position in front of Paul Rudd's Ant-Man, still feels pretty momentous. And luckily, the full film, which positions its female heroes as leaders and masterminds, makes it clear that this is more than just a feeling: The Wasp truly seems like the first step on a journey towards better, stronger, truly fantastic female MCU heroes.

Of course, it's not quite a spotless victory since she's got to share this one with Paul Rudd (who is delightful, but is yet another white man leading a Marvel film). The second movie in the Ant-Man franchise finds Rudd's Scott Lang on house arrest, a punishment slapped on him after the events of Captain America: Civil War (thankfully, this film takes place before the events of Infinity War, aka Avengers: The Dusting).

While Scott's busy building forts with his daughter and learning some super sick drum solos thanks to his FBI-issued ankle monitor, Hope van Dyne (Lily) and her father are hiding from the government and working furiously to build a link to the quantum realm where they hope to find Hope's mother (Janet, the original Wasp who went subatomic to stop a bomb from destroying an entire city when Hope was a child. Casual). Eventually, Hope decides she needs help from her old pal (and ex-partner in "other-stuffing" as she so eloquently puts it) because he's started hearing Janet's voice in his head, meaning they might share a connection. So that's where we start: with Hope, not Scott, as the hero in this equation.

And while the film most certainly keeps Ant-Man as its center (it helps that he got an entire movie to develop his character while Hope was just a bad Cate-Blanchett-from-Indiana-Jones-5 haircut until the last 20 minutes of the original Ant-Man), it's clear that the writers worked hard to push Hope further into the spotlight.

The movie opens with Hank Pym (her father, played by Michael Douglass) giving a teensy origin story for Hope: Hope's mother was the original Wasp and loved her so much, then she was lost, now they need to find her, which means Hope gets to be the Wasp 2.0. We find that not only has Hope achieved a better look since the first movie (thank the tiny ant gods), but she's practically running the show — doing deals on the black market, busting up dudes who try to rip her off, and then, you know, kidnapping Scott and driving around San Francisco in a Hot Wheels-sized SUV. In her first fight scene, she takes down 10 dudes by herself, only needing backup from Scott when the film's villain, Ghost (played by Hannah John-Kamen), shows up and makes the part where the heroes hit the bad guys kinda tough on account of her moving-through-matter abilities.

For his part, Scott attempts to point out that Hope's got better gadgets than he does (sure, wings and blasters do add some flair), but we all saw this guy train in the first movie — he's more of a suit-operator than an artist. He's capable, he does a good job, but he's painting by numbers. But the aerial acrobatics and dextrous shape-shifting that The Wasp pulls off are pure magic. This woman kicks so much ass, it's almost infuriating that she wasn't recruited to the Avengers before the Infinity War went down — she could have given Thanos and his minions some serious trouble.

But beyond her abilities, Hope is just a better hero than Scott, full stop. Throughout the film, Hope pushes him to be more, to step outside of his comfort zone, to try harder (Scott's adorable, future hero of a daughter, Cassie — who grows up to don a shrinking suit in the comics — backs her up on this). Hope gets Scott out of binds, risks her life to save him, and generally drives the entire plot of the film, albeit with a hand from Ghost.

And speaking of Ghost — her motivation for evildoing is entirely justified, and her powers seem more like an unfortunate side-effect than a strength, but she still gives everyone a run for their money. Even Hope's mother, Janet Van Dyne (played by the incomparable Michelle Pfeiffer), shows herself as more of a hero than her husband — after all, she is the one who decided to risk her own life to save an entire city in the long-ago instance that got us into all this quantum nonsense. Add to that the fact that Janet kept her maiden name and that Hope carries her mother's last name rather than her father's (and to think, these crazy kids had Hope in the '80s), and you've got yourself a pretty decent effort at a feminist MCU addition.

Of course, the movie is not, by any means, perfectly feminist. For one, the Ant-Man side-plot is a safe place to experiment because the stakes are remarkably low. This franchise often feels like an expansion pack to the main Avengers storyline rather than a must-see component like the Thor movies or Captain America's adventures, so this victory is (pun intended) a small one.

Secondly, Hope, for all her progress, is still underdeveloped. In the first film she was simply a badass who most definitely wanted to make out with Paul Rudd. Now, she's a badass who just got permission to be more badass, and who is really mad at Paul Rudd and makes out with him again despite zero evidence that she still wanted to do that. Some of this is a real estate issue; while Thor, for instance, had three movies to truly develop as a character that's more than just a handsome wall of muscles who likes to smash things with his hammer, Hope has only gotten one and a half movies to do the same. Still, it couldn't have been that tough to offer our girl a little more depth between all those car stunts and Rudd's very welcome ribbing of the whole quantum realm plot-line.

And unfortunately, Hope's not alone in this underdeveloped space. Janet is more of an avatar for heroism than she is a developed hero; yes, Pfeiffer does her Pfeifferiest to give the role some weight, but there's simply not much to her. Ghost, meanwhile, is a simple villain (her parents died in accident that gave her powers) with no hope for longevity since her entire storyline has two possible outcomes since her powers are actually a terminal illness, meaning she can get rid of her powers and live as a normal person or she can die from said powers — thassit.

All in all, you can sort of see Marvel's hand here. We asked for more powerful women, so here we are: The Wasp is the best hero! Her mom is smarter than everyone! The villain is a girl too! The dudes in this movie are hapless and only succeed by accident! Ant-Man's daughter has loads of moxie!

But while none of that is earth-shattering, it is all actually part of an important, significant step. The MCU dipped its toes into the waters of gender parity with characters like Gamora and Nebula (whose storyline about sisterhood in Guardians of The Galaxy Vol. 2 was truly moving) and Shuri, Okoye, and Nakia (the women of Black Panther, who became the MCU gold standard for how to treat secondary female characters with respect and depth). Now, with the Wasp, the MCU has begun to actually wade into that water. It may be a minor move, but it's something, and with the next major Marvel film unflinchingly focused on one of the most powerful (if not the most powerful) characters in the Marvel Universe, Captain Marvel, it seems pretty clear that the MCU's next step is to dive right in.