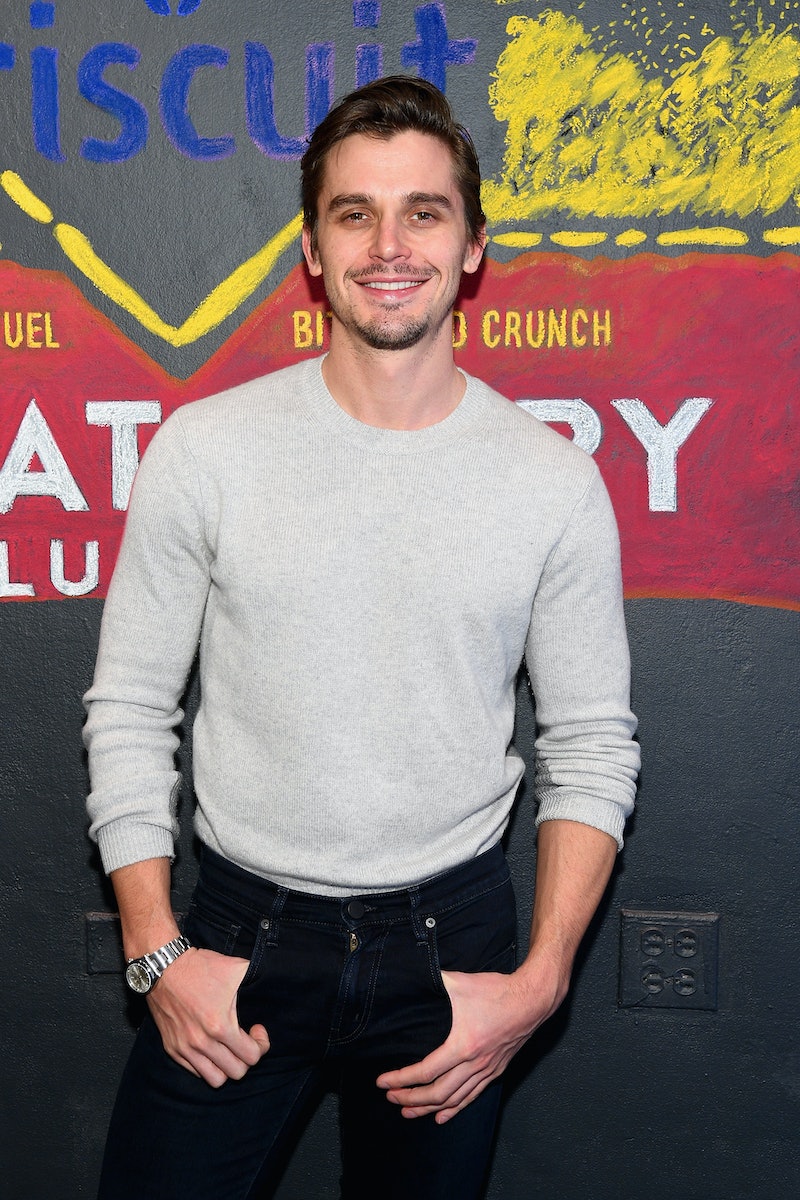 Finally, after way too much time without answers, Queer Eye star Antoni Porowski has explained that Kate Beckinsale and Pete Davidson meme. During a Monday appearance on Jimmy Kimmel Live!, host Jimmy Kimmel asked Porowski about the viral photo of himself sitting next to Beckinsale and Davidson kissing at a New York Rangers game in early March. As soon as the picture of the rumored couple (they have yet to confirm their relationship status) hit the internet, people had a field day creating memes, especially due to Porowski's facial expression.

Well, thanks to Kimmel asking the hard-hitting questions, Porowski revealed exactly what was going through his mind during what appeared to be somewhat of an awkward situation. According to the Netflix star, the reason he made such a meme-worthy facial expression had to do with the actual hockey game. He told the late-night talk show host,

"I just want to say, just to finally clarify. There were two hockey players going at it — basically, like, beating the hell out of each other — and I was genuinely concerned."

That's right, he was watching the game, you know, which is why he was there in the first place. Porowski wasn't concerned with The Widow star and Davidson's steamy PDA.

Also, per Porowski, as uncomfortable as the picture may look, he had a lovely time with both Beckinsale and the Saturday Night Live star. "We chatted the entire game," he said. Porowski also dished about Beckinsale and said, "She's very funny, witty, and charming AF". If you've ever read some of her Instagram comments, you know exactly what he's talking about.

As for those memes, here are just two examples:

After the image of the trio found itself as a meme, Beckinsale "clarified" the picture by responding to one meme in particular. The specific meme was from @dietbroke that implied Davidson represented "guys with problems from childhood who I can 'fix,'" Porowski was "wholesome guys with good paying jobs who text back and have no baggage," and Beckinsale was all of us in this situation.

Well, she clearly didn't agree with the meme and as pointed out by Comments by Celebs' Instagram account commented, "Antoni is gay, if that helps clarify at all."

Basically, Beckinsale was saying she's not the Queer Eye star's type, nor is he the so-called nice guy being ignored. The two simply just aren't a match, hence why she's kissing Davidson.

Similar to the British actor, Porowski also took to Instagram after the meme made headlines. He hilariously shared a picture with Davidson and captioned it, "Random pic of me and my frahnd no reason at all totes random love u Petey xo."

See? They both have nothing but good sense of humors about it all. At this time, it's unclear how Davidson felt about the photo, because he has yet to comment publicly.

There's no denying the meme is funny. Also, who else wishes they could've heard the conversation Porowski had with Beckinsale and Davidson? They probably had a lot of laughs and one can only imagine what kind of sarcastic remarks she dropped along the way. Too bad Porowski didn't ask open up more about their chat, but at least everyone now knows why he made that face.