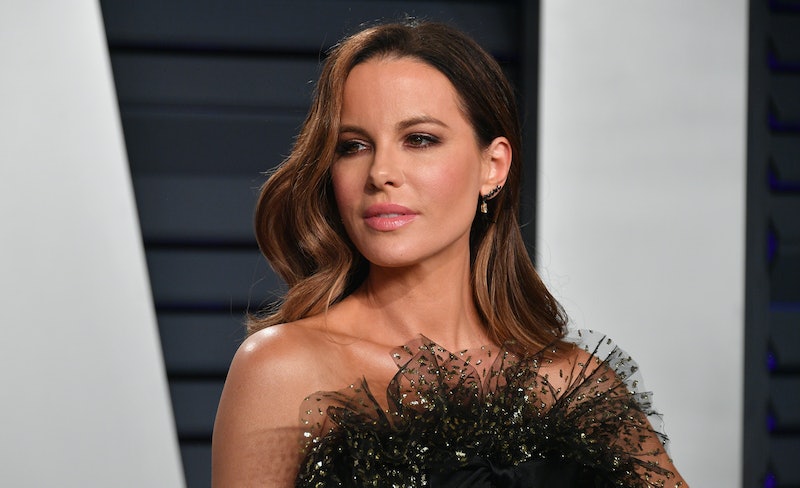 Things just keep getting better when it comes to the reactions to that photo of Kate Beckinsale and Pete Davidson making out. You know the one with Queer Eye's Antoni Porowski that proves stars are just like us in that their friends have also made them feel uncomfortable with their PDA. Beckinsale's response to the Antoni memes, though, might be the best one yet. In fact, it offers some clarity to that viral photo.

Shortly after this shot of Beckinsale, Davidson, and Porowski at a recent New York Rangers game hit the internet the memes started. And with most of those memes the message was that Antoni, poor Antoni with that forlorn stare of his, was truly all of us. But, there was one meme in particular that Beckinsale just couldn't ignore.

It was one from @dietbroke that implied Beckinsale was actually all of us in that she was going for Davidson, who in this case represent "guys with problems from childhood who I can 'fix.'" Instead of going for "wholesome guys with good paying jobs who text back and have no baggage," you know, like Antoni.

But, as Beckinsale pointed out in the comments, which was captured by the Instagram account @CommentsByCelebs, she's not really Porowski's type. "Antoni is gay," Beckinsale wrote, "if that helps clarify at all." Actually, it kind of does Kate, thank you.

See, Beckinsale is basically saying that Porowski's not the nice guy being ignored here, they're just not a match. It's also most definitely her cheeky way of calling BS on this meme, which implies Davidson, who was engaged to Ariana Grande last year, isn't a good choice for her. Beckinsale will decide that for herself, thank you very much so don't ruin her good vibes, OK?

But, let's not pretend these photos of Beckinsale and Davidson don't make for very good memes. Besides the obviously very relatable "we are all Antoni" memes, the best one might be Queer Eye's tweet promoting Season 3 that includes an original spin on this meme. Even Porowski got a kick out of. "Love this pic where'd you find it, guys?" he tweeted.

Let's be honest though, these photos also show how much fun these two are having. Beckinsale and Davidson, who haven't yet confirmed their official relationship status, are having so much fun that you might not want to sit right next to them at the next Rangers game.

Honestly, though, Porowski seems alright with with his current meme status, which for the first time has nothing to do with avocados. In fact, after his mentions started blowing up he posted a different photo of him and Davidson. "Random pic of me and my frahnd no reason at all totes random," Porowski wrote on Insta. "love u Petey xo."

See, Antoni's got jokes and we know Davidson does, too. Here's to hoping Davidson will share some of his thoughts pertaining to this now infamous photo very soon. Clearly, we'd still like a bit more clarification on this one.