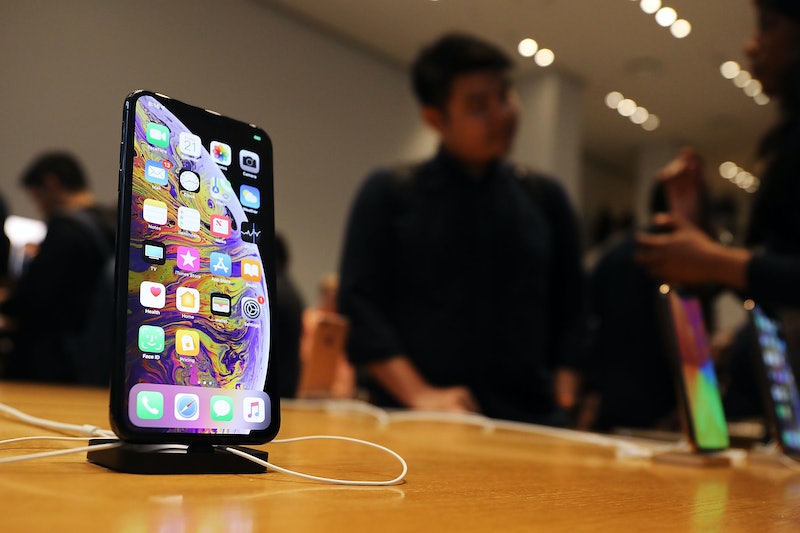 There are plenty of 21st century developments that might make you go, "The future is here!" but what Apple reportedly has up its sleeve for a new iPhone model is really next level. Apparently, Apple could release a folding iPhone, as reported by Forbes. And if you're thinking, Um, yeah, it's called a flip phone — No! The screen folds, moving the device from a phone to a tablet.

On Thursday, February 28, the fan site Apple Insider reported that the U.S. Patent and Trademarking Office made public a patent application from Apple called "Electronic Devices With Flexible Displays." As the site points out, this does not necessarily mean Apple will create a phone with a flexible display, but rather that the company is looking into it.

And that makes sense. Other phone makers have already released or announced plans for phones with folding screens. The biggest name one so far, Samsung's Galaxy Fold, will hit the market on April 26, according to Inverse, with an expensive price of $1,980. It also sounds like it could be harder to get your hands on as compared to a usual release. According to CNET, Huawei, Motorola, and TCL are also looking into foldable phones. There is also the Royole FlexPai, a foldable phone that has already been released.

Apple Insider reports that according to the patent application, Apple is looking into ways that a foldable display could be heated since the company seems to believe damage could potentially occur if the screen was folded in particularly cold temperatures. The patent application reads, "To facilitate bending about the bend axis without damage when the display is cold, a portion of the display that overlaps the bend axis may be selectively heated." According to Apple Insider, this could be done by adding a heating element to the fold in the device or by using the heat that's generated by the screen lighting up, perhaps via some sort of screensaver.

CNBC reported last March that a Bank of America Merrill Lynch analyst said the first foldable iPhone could launch in 2020. But, again, nothing has been confirmed by Apple, including whether this will happen at all. The analyst reportedly said in a note to clients, "We expect the iPhones this fall to be largely unchanged for the OLED versions although size changes have proved to be a catalyst in the past. Our checks also suggest that Apple is working with suppliers on a foldable phone (that potentially could double up as a tablet) for launch in 2020.”

The part about the new phones being predictable, front-folding updates ended up being correct in 2018. In the fall of last year, Apple released the Xs, Xs Max, and Xr.

This fall, the company is expected to release three new phones once again, as reported by the Wall Street Journal. As far as what these will include, there is a rumor that one of them will have four cameras in total: three rear-facing and one front-facing selfie camera. It's also been rumored that the phones will still have lightning ports, as opposed to updated USB-C ports.

In the end, if you're interested in a foldable iPhone, it's probably going to be a while. For now, check out these photos of what it could look like. They're pretty mesmerizing.

More like this
26 Ghost Story Podcasts To Get You Ready For Halloween
By Jessica Booth, Mia Mercado, JR Thorpe and Emma Carey
20 Smart Devices Under $35 That’ll Change The Entire Vibe Of Your Home
By Emma Carey
Why TikTok Is Flooded With Controversial Videos About "Pick Me Girls"
By Courtney Young
Here's How To Get Your iPhone To Update Automatically Forever
By Emma Carey
Get Even More From Bustle — Sign Up For The Newsletter