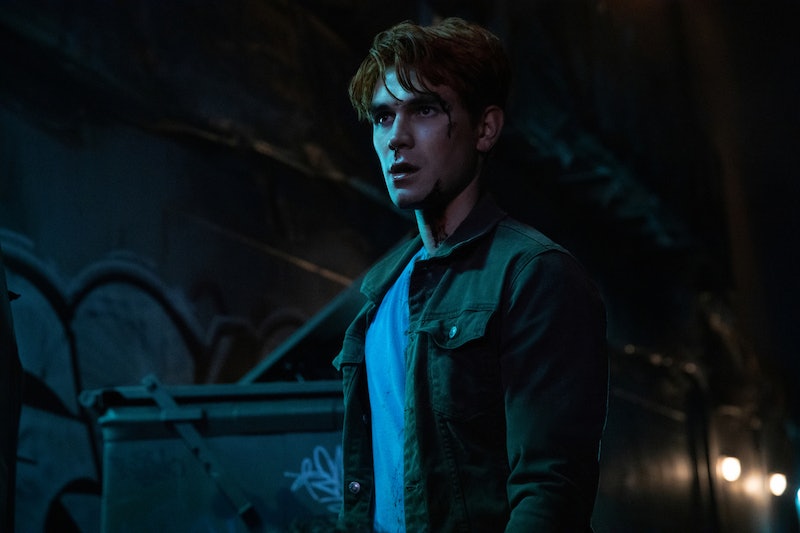 Spoilers ahead for the midseason finale of Riverdale Season 4. In order to cope with his father's tragic death at the start of Riverdale's fourth season, Archie Andrews (KJ Apa) has taken to roaming the streets at night like an off-brand Batman — staving off the town from harm because that's what Fred Andrews would do. However, in Riverdale's midseason finale, Archie's Uncle Frank shows up out of nowhere, which may allow him to finally get the closure he needs...and start leaving the crime-fighting to FP.

Though it's not uncommon for estranged relatives to pop up in Riverdale, Frank's arrival is particularly surprising because Archie and his dad were close, yet Fred has literally never mentioned Frank before. In fact, it seems like Archie didn't even know he existed. "It's good to see you, son," Frank tells him, fighting back tears. "My name's Frank. I'm your dad's brother."

We don't learn much about this new, mysterious uncle from the brief scene, but it's a storyline that's been in the works for a while. Deadline reported in October that Ryan Robbins would play Fred's brother in Season 4, and described the character as a "blue collar, former high school football star" who's "tough, brash, and charming" with a temper and vices that get him into trouble. He's also said to have lived in Fred's shadow for his entire life, and as a result, joined the Army and did three tours — which explains why he's been largely absent from Archie's life. Now, Deadline continues, he's "haunted and in need of a home."

By that descriptor, it seems like Frank will be sticking around Riverdale and may even serve as a much-needed father figure for Archie. However, it sounds like Frank has also struggled with jealousy towards his older brother, so he may paint Fred in a different light than what Archie is used to. Whatever the case, hopefully Frank will be able to help his newfound nephew grieve.