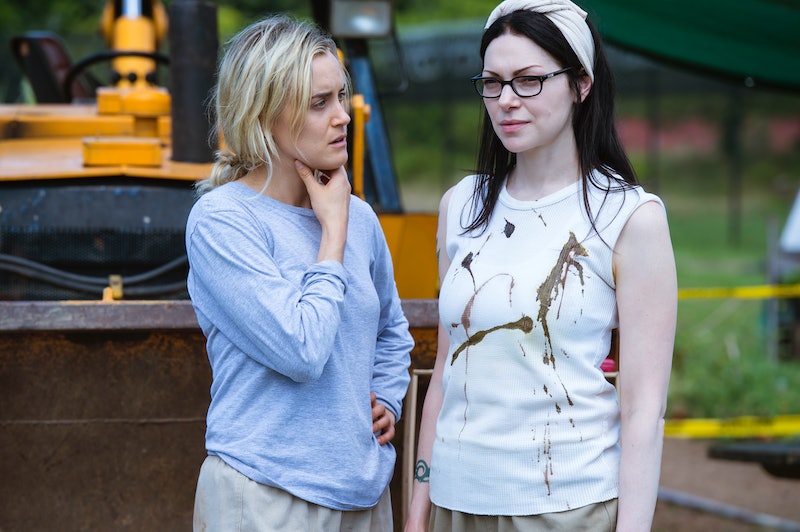 Alex and Piper's relationship in Orange Is The New Black is simultaneously infuriating and hopelessly romantic. Despite their numerous break ups, they always seem to find their way back to one another, pulled together by some magnetic and unyielding connection. But amidst the chaotic back-and-forth, it's often hard to keep track of where they stand. So, are Alex and Piper together in Orange Is The New Black Season 5?

All signs point to yes, but first, let's do a quick review. In Season 3, Piper left Alex for Stella, a new inmate played by Ruby Rose, though their fling was short-lived: Stella stole money from Piper's burgeoning panty empire, and as revenge, Piper planted contraband in Stella's bunk. When it was found, Stella was shipped off to max.

When Season 4 picked up, Piper and Alex were still estranged. A power-hungry Piper continued to ruthlessly build her business, while Alex grew increasingly paranoid that she'd be caught for killing Aydin Bayat — Kubra's hitman who was posing as a correctional officer. After a daunting encounter with Maria Ruiz, Piper did some necessary self-reflection and finally realized she didn't like the person she had become. She apologized to Alex, and together, they began to help each other confront their past transgressions and move forward. By the the finale, they'd officially rekindled their romance.

This time around, however, it seems like they're trying to start fresh. When viewers last saw Alex and Piper, they were burning the evidence Alex had left to implicate her in Aydin's murder, suggesting she'd begun to let go of the guilt she felt for killing him. Then, when the prison riot erupted, Piper and Alex decided to stay out of it and run the other way. In the past, an over-involved Piper may have wanted to insert herself into the middle of the turmoil, but for now, at least, it seems she's finally learned not to entangle herself in other people's drama. (In the trailer, she offers help, she doesn't force it).

That bodes well for both their relationship and the women of Litchfield as a whole. The focus of Season 5 is unity and empowerment: finding justice for Poussey, pushing back against unjust treatment. To do that, the inmates will need to break down their walls of difference and come together as one — the stronger they are together, the better their fight. Alex and Piper are a powerful team when they want to be, and having them on the same side will only make the rebellion more effective. Hopefully, they've finally grown into the mature, healthy couple fans have long been rooting for them to be, and they can start over stronger than ever.