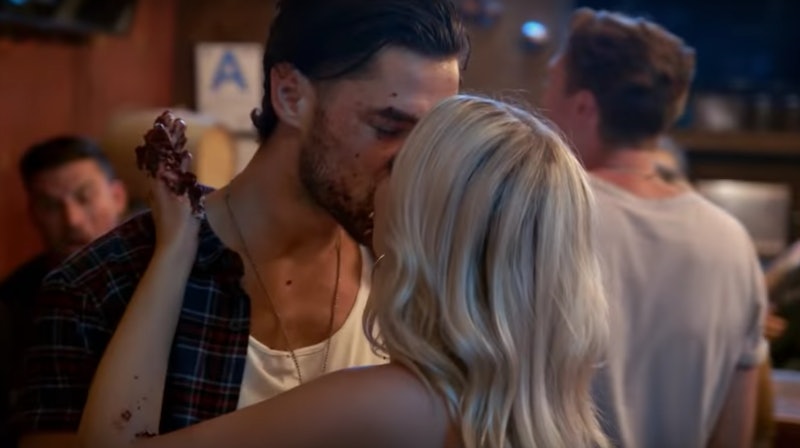 We may have only just met the newest SURvers on Vanderpump Rules a few weeks ago, but we already know one thing about newbie Dayna Kathan: she has terrible taste in men. On the show's April 7 episode, she made her split from TomTom manager Max official (well, as official as a two-week "exclusive" relationship can be) by hanging out with SUR employee Brett. And by the end of the episode, they were making out with birthday cake on their faces, as is the natural next step in any blossoming romance.

If Max's annoyed reaction to this development is any indication, this is not the end of their love triangle on the show. "Brett is good looking. But I just didn't know him that well and then we had started out hanging out a little more, it caught my attention," Dayna said on Bravo's Daily Dish podcast in March. "I was like, 'Huh, maybe I chose wrongly [by pursuing Max first] here in this situation.'"

Judging by Dayna and Brett's social media accounts, however, their fling may have died out even quicker than her and Max's. While Dayna's Instagram shows that she's definitely still hanging around her fellow Vanderpump stars — and particularly Ariana — Brett is nowhere to be found, and the same goes for her on his page. Lisa Vanderpump, his abs, and even Scheana are on Brett's Instagram more than Dayna (at least he knows what the people want). They could be keeping things private, but in the Vanderpump Rules universe, nothing stays secret for long (looking at you, Jax and Kristen).

All in all, it seems more likely that Brett is now dating Lisa Vanderpump than he is Dayna.