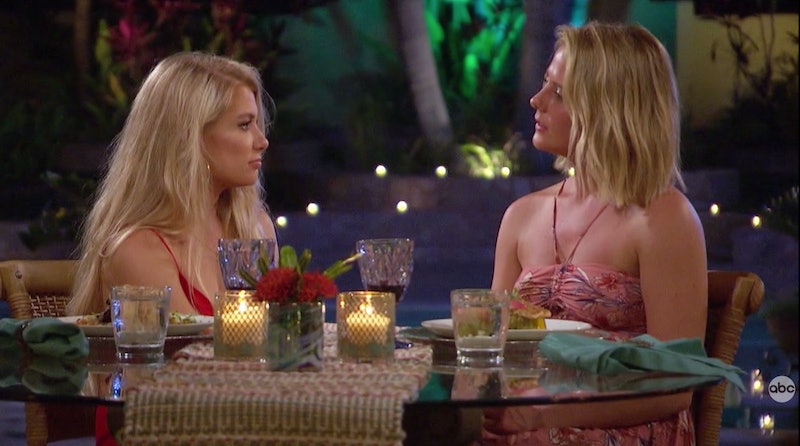 Sadly, Bachelor in Paradise Season 6 is coming to an end. But, happily, this also means that there are (probably) engagement announcements on the horizon. There are a few pretty steady couples this season, but there is one that is the most solid by far: Demi Burnett and Kristian Haggerty. But it's unclear if Demi and Kristian are engaged after Bachelor in Paradise or if they returned back home to keep doing what they're doing. Marriage is a big step, after all.

At this point, it would be shocking if Demi and Kristian weren't engaged. They built a foundation to their relationship in real life before Kristian arrived in Paradise. They both said "I love you" during their first one-on-one date this season. They are a serious couple, focused on each other, and their connection is undeniable. Nevertheless, there have been plenty of Bachelor in Paradise pairs that fans thought would get engaged during previous seasons that ultimately left the beach separately.

Even before a single episode aired, Demi said "I smell an engagement" in the trailer for the season. Sure, she could have been chatting about another pair on the beach, but she was shown walking along to the beach to the BIP proposal site.... most likely to pop the question herself.

And then there are the proposal snippets from the season previews. Three different engagements are shown and this one could be from Demi and Kristian's engagement.

Truth be told, there isn't a ton of evidence to back that up. Still, the woman with the engagement ring already has at least one other ring on. Meanwhile, Kristian has worn a lot of jewelry on the beach, but has not worn that particular ring. So, the jury is out on that one, but it wouldn't be shocking if she already had some jewelry on during an engagement.

Additionally, the other two engagement photos are not Demi and Kristian based on process of elimination. The blue bracelet in one looks just like the one that Dylan Barbour wears all the time. The other photo is very clearly of someone who is not white, which rules out Demi and Kristian for sure.

That season preview is far from a smoking gun. Nevertheless, it kind of feels like Bachelor alums confirmed that they together currently. They have been highly celebrated by Bachelor cast members and friends of theirs, which would be a weird thing to do if the two of them broke up. Sure, it could mean that they are together and just not engaged.

Still, there are other signs that things are going very well for Demi and Kristian. In August, Catherine Agro, who Demi met during Colton Underwood's season of The Bachelor posted an Instagram Story of Demi and Kristian with the caption "my two best friends!!!! i love you both so much happy!!!"

Catherine was the one who introduced Demi and Kristian and she is a close friend to both of them. If their relationship went south, why would Catherine be so supportive? Furthermore, when Demi posted a photo from her date with Kristian, lots of Bachelor alums commented in the present tense about their love for Demi and Kristian's relationship, implying that they are probably still together.

There's no clear giveaway that Demi and Kristian are engaged. However, they already dated before Bachelor in Paradise and had a strong relationship from the jump. If it makes sense for anyone to be sure about an engagement, it would be these two. Now, it's a waiting game for the official confirmation.