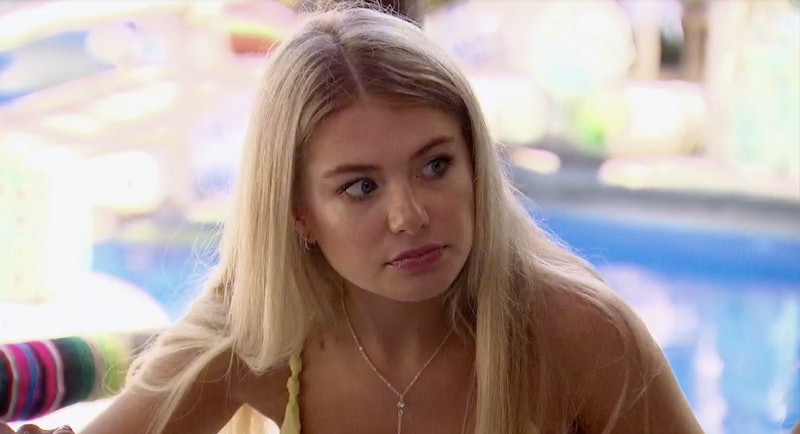 Let's backtrack a bit. During the premiere of the current Bachelor in Paradise season Demi met up with her good friend Hannah Brown to give some updates on her love life. Demi told Hannah, "I have kind of been seeing someone. Of course, plot twist, it happens to be a woman." She went on to explain, "It's not something that I need to label, so I don't feel like I have to proclaim 'I am gay,' 'I am straight,' 'I am bisexual,' 'I am this.' I just like what I like. It doesn't matter who or what you are. It's the person."

Hannah quickly agreed that Demi is a "fluid person" and "not just one thing." In regard to Kristian specifically, Demi added, "She has like the warmest energy. She never gets mad. She's amazing. You would love her. We really fell like head over heels for each other." She also emphasized that there was "no exclusivity or nothing like that" between them, which is part of why she felt like she could still go on BiP. Bachelor Nation is work for these people, and it sounds like Kristian wasn't trying to hold her back from anything.

During one of her confessional interviews, Demi explained, "I just feel like the only way for me to truly know what I want and how I want to love and who I want to love is if I try out Paradise. Maybe Paradise is what it's gonna take for me to figure it out." It sure seems that way, given that it seems like Chris Harrison brings Demi's partner down to the beach. Since Kristian is the only person on this season that viewers haven't seen before, here's a little bit of background information:

She's Friends With Other Bach Alums

It seems like Demi might have met Kristian through Catherine Agro, a contestant from Colton's Bachelor season along with Demi. She wasn't on the show for a long time, but she did give Colton her own dog.

This may be Kristian's reality TV debut, but it's far from her first time on a set. On her official website, Kristian lists her production assistant and second assistant director experience.

Kristian is one of the people pursuing love in Paradise, but she is also a major supporter of other people's relationships. Watch out Chris Harrison: Kristian is also an ordained minister.

She Gets Along With Derek

Fans may be wondering how Demi's original BiP love interest Derek Peth feels about Kristian, but it turns out that these two are good friends, liking and commenting on each other's posts.

This is not surprising considering how supportive Derek was when Demi told him about her girlfriend at home during the Aug. 13 episode. Derek applauded Demi for being "brave, vulnerable, and honest" in a follow-up tweet.

She Is A Stetson University Graduate

According to her website, Kristian attended Stetson University on a crew scholarship. While she was there, she worked on campus and became a member of a sorority. She graduated with a Bachelor's Degree in Business Administration in 2014.

She Is An Improv Comic

Demi is known for making fans (and her fellow contestants laugh), but it sounds like Kristian might give Demi a run for her money. Kristian graduated from the improv program at SAK Comedy in Orlando, Florida in 2017. She also graduated from The Second City improv program in Chhicago in 2018. Maybe Kristian will join Demi and Jordan Kimball in hilariously roasting their fellow cast members on the beach.

After a lot of talk, Bachelor in Paradise will finally get to know Kristian when she joins the cast to explore her connection with Demi. It's clear that Kristian brings a lot to the table and it will be exciting to see how things unfold with Kristian and Demi.