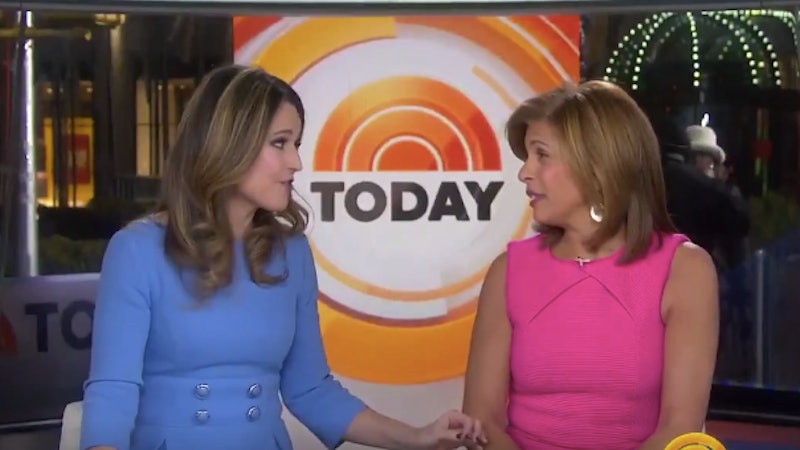 On Tuesday, Savannah Guthrie announced that Hoda Kotb would be its new permanent co-anchor, marking a new, women-led era for the program. And judging by the celebratory mood on Today, it was clear that Kotb and Guthrie's friendship and chemistry will serve the show well.

It's been weeks since the two reported that their colleague Matt Lauer was being let go by NBC after a sexual misconduct allegation from a female employee. (After his firing, more accusations were leveled against him; Lauer denies most of the allegations.) Kotb has filled in as the Today show's co-host over the years, but since Lauer's ousting, she has joined Guthrie during its first two hours, on top of her fourth hour on the show with Kathie Lee Gifford. On Tuesday, her position there became permanent.

Guthrie and Kotb co-hosting the Today show together marks the first time the popular morning program is being led by two women anchors. "It is 2018 and we are kicking off the year right, because Hoda is officially the co-anchor of Today. ... This has to be the most popular decision NBC News has ever made, and I am so thrilled," Guthrie said while announcing the news on Tuesday. "Hoda, you are a partner and a friend and a sister and I am so happy to be doing this."

Many of the Today show hosts appear to be fast friends. Several NBC hosts, including Megyn Kelly and Gifford, congratulated Kotb on her promotion, but none seemed as delighted as Guthrie, who hosted the show alongside Lauer for five years.

In an interview with People magazine, Guthrie sang Kotb's praises. "[W]hat’s really cool about this is just getting to get up everyday and do the things you love to do with your really good friend who you trust and love and enjoy," Guthrie said. "Our biggest problem is that we actually talk about other things all throughout the show. Sometimes we’re like, ‘Okay, pay attention. Do your jobs ladies!'"

Kotb and Guthrie reported on Lauer's firing in November 2017, and the two were widely praised for how they handled the news. Finding a replacement for Lauer — who was the highest-paid anchor at NBC before he left — didn't appear too difficult, given Kotb and Guthrie's performance since he left While the program's ratings have slipped in recent years, since Lauer was fired, it has surged to the number one spot, consistently beating ABC's Good Morning America lead in the past few weeks.

In their interview with People, both women spoke of how they dealt with the aftermath of the allegations about Lauer, whom they considered a good friend.“I think you could see from the moment that the news happened that our hearts were broken, and in lots of ways, they still are,” Guthrie said, describing the Today show staff as family.

"[F]amilies do go through hard times, and when that happens in good families, you just get closer. You pull together and you focus on the foundation and what keeps you together," she added. "I think that’s what we’ve all been trying to do. And for me, I just am trying to get comfortable with how complicated the feelings around all of it are, and it is complicated. And just trying to have love and compassion for everyone concerned."

NBC's decision to name Kotb as the Today show's permanent host has been lauded across social media, with many echoing Guthrie's sentiment that it was a good start to the year. "I'm pinching myself," Kotb said during the announcement on Tuesday morning. Turning to Guthrie, she added, "There's no one I'd rather be sitting next to in 2018 than you."