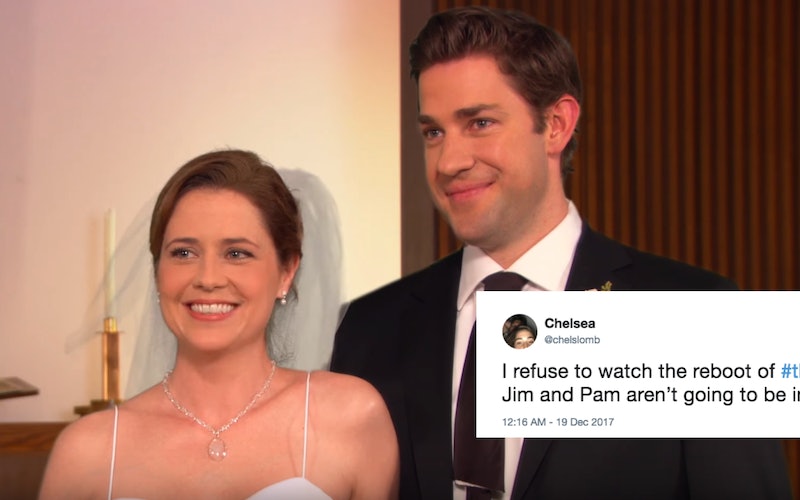 By now, you've probably heard the spectacular news that everyone's favorite Pennsylvanian paper company is most likely returning to TV in 2018. Yes, clumsy "diversity days" and failed fire drills will soon humor you to tears again, but will Jenna Fischer and John Krasinski be in The Office revival? The two actors, who respectively played Pam and Jim, were Office staples — no pun intended — that made up one of the most adorable TV couples ever, so everyone most likely wants to know if they will return.

While they could potentially make a few guest appearances, Krasinski and Fischer have a lot of other things going on right now, so the chances of a full-time return seem slim. In the announcement of the reboot's development for NBC, TVLine made it clear that not all of the original cast members of The Office would return. In fact, the reboot's announcement stated that Steve Carell, who played Michael Scott, would not return for the 2018 reboot. That announcement likely doesn't surprise fans of The Office, considering that Carell departed after the sitcom's seventh season, while it continued on for a total of nine seasons. NBC is already planning to replace Carell, as TVLine stated, "The search for a new RM/boss is said to be already underway."

Since Jim and Pam left Scranton to move to Austin, Texas at the end of The Office's ninth season, it would make sense that the two of them wouldn't return for a show set at Dunder Mifflin, but that doesn't mean that they won't make appearances. They'd better at least, because what would The Office be without "Jam" in it at least a little bit? Don't answer that — it's better not to imagine such dark possibilities.

As mentioned earlier, the actors who played Jim and Pam have been really busy since the fan-favorite show ended. Krasinski went on to star in the war movie, 13 Hours in 2016, and he's set to star in a new show on Amazon called Tom Clancy's Jack Ryan, which will premiere in 2018. Fischer, aka Pam, has worked on a lot of exciting projects post-Dunder Mifflin as well. She wrote a book called The Actor's Life: A Survival Guide, which came out in 2017, and she is starring in a new ABC show called Splitting Up Together, which has its midseason premiere in 2018.

Some fans are even saying that they don't want a reboot if it doesn't include Pam and Jim.

Even though they have professionally moved on from The Office, Krasinski and Fischer remain close with their co-stars. The cast's tight-knit relationship should give fans hope for The Office's reboot, as it may mean that even if Krasinski and Fischer don't portray Jim and Pam moving back to Scranton, they will probably at least visit.

Just the day after The Office reboot was announced, Fischer tweeted about "An Office reunion of two" when she appeared on Angela Kinsey's (who played Angela Martin on The Office) web series.

The chances that other stars of The Office's original cast will join the NBC reboot are pretty high, so don't get too sad about the lack of Michael, Jim, and Pam. As IndieWire pointed out, NBC already developed a spinoff series for Dwight Schrute's character (Rainn Wilson) about the quirky farmer's home life. While that show, pitched as The Farm, never took off, it suggests that Wilson is open to reviving his beloved Office character, which would make the 2018 reboot officially irresistible for fans.

Jim and Pam most definitely will be missed, but it's still not official that they won't return to The Office in 2018, so who knows what will actually happen. As long as some of the original colorful characters return to Dunder Mifflin, the upcoming show will most likely be as fun to watch as the original.