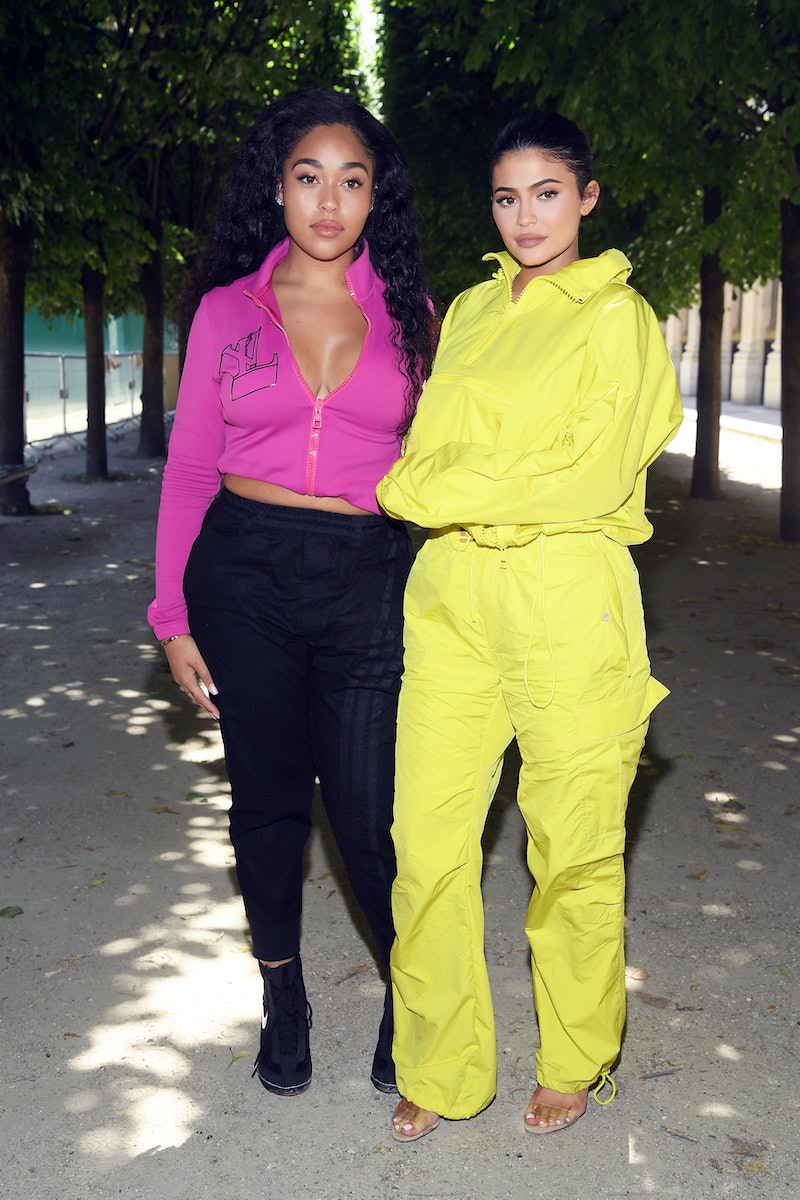 It cannot have been an easy couple of weeks for either Jordyn Woods or any of the Kardashian-Jenner sisters. After Hollywood Unlocked and TMZ claimed on Feb. 19 that Tristan Thompson reportedly cheated with Woods at a recent party, fans have been left wondering what actually happened. On Friday, March 1, Woods talked to her close family friend Jada Pinkett Smith on Red Table Talk to give her side of the story. While she didn't offer up too many personal details, it does sadly seem like Woods and Kylie Jenner's friendship right now is on the rocks. And the damage might run too deep to salvage anytime soon.

When the cheating reports first surfaced, Bustle reached out to reps for Woods, Khloé Kardashian, and Thompson for comment, but has not heard back. During the interview on Friday, Woods claimed there was "never anything intimate" between her and Thompson. However, she did admit to not being fully honest with the Kardashian-Jenner family about what actually happened at first. Woods said that if she could go back and do it again, that would have been one of the first things she'd do differently.

What makes this story so heartbreaking to watch unfold is that fans know how close Woods was to the Kardashian-Jenner family. As Smith put it during their conversation Friday afternoon, both Khloé and Kylie had "embraced" Woods "as a sister."

Woods didn't talk too much about Kylie, though she did say that she had been in contact with her since the rumors started to make headlines. While the two are best friends, it has to be a rough spot to be in for Kylie, given that Khloé is her sister, so it makes sense that she might need her space, which is what Woods seemed to imply during the interview.

Woods also explained that she and her family felt attacked by people on social media and the press, and that she felt she had to "break her silence" since it "had gone on for too long." Woods said she told Kylie that she was doing the interview for that very reason, but she didn't mention if Kylie responded or if there was any pushback.

A fan asked Woods during the "viewer question" segment whether Woods had also apologized to Khloé, to which she emphatically said yes. Though, on that front, too, things seem a little rocky.

Woods explained that she had spoken "a little bit" with Khloé over text and on the phone, but not in person, though she had made it clear to them that she would like to sit down for a real talk. Woods added,

"I let [Khloé] know that I would do whatever it takes for her peace of mind, not for my image, not for my career, because that's something on its own. But this is now for [Khloé's] peace of mind, and there was no malicious intent."

She even offered to take a lie detector test, although it didn't sound like anyone was taking that offer seriously on the Kardashian or Jenner front. Still, she is contrite. Woods continued, "I'm willing to take full responsibility, I'm not asking for you to forgive me overnight, I'm just asking you to hear me out."

It sounds like Khloé, Kylie, and the rest of the family might not be ready for that yet. Just after the interview, Khloé tweeted that Jordyn was "lying." Kylie's social media accounts have been quiet regarding the reported situation, but it's likely that she's paying attention.

For now, it seems like things are icy between Jordan and Kylie, based on what she said during the interview. There are also unconfirmed sources who told People that Woods, who was living on Kylie's property, had moved out last week.

While Khloé and Kylie might rightfully feel betrayed by the situation, Woods seems to be feeling on the outs, too. She noted that the media focus has been on a "young black woman who made a mistake, and not a mistake that deserves public crucifixion." Woods added, "It's a mistake that should have been dealt with internally."

It looks like it will take more time for Khloé and Woods to work things out, and until then, Kylie is caught in the middle between her best friend and her sister. Smith might have put it best when she told Woods, and viewers, that "this could be a tough one to swallow" for everyone involved.

More like this
Paul Mescal, Man Of Mystery
By Samantha Leach and Heather Hazzan
Everything To Remember About Lace Morris Before 'Bachelor In Paradise' Season 8
By Grace Wehniainen
Khloé Kardashian Is Reportedly Dating A Private Equity Investor She Met Through Kim
By Jordyn Tilchen and Jake Viswanath
Dixie D’Amelio & Noah Beck “Love Each Other” Despite Breakup Rumors
By Julia Emmanuele, Jordyn Tilchen and Grace Wehniainen
Get Even More From Bustle — Sign Up For The Newsletter