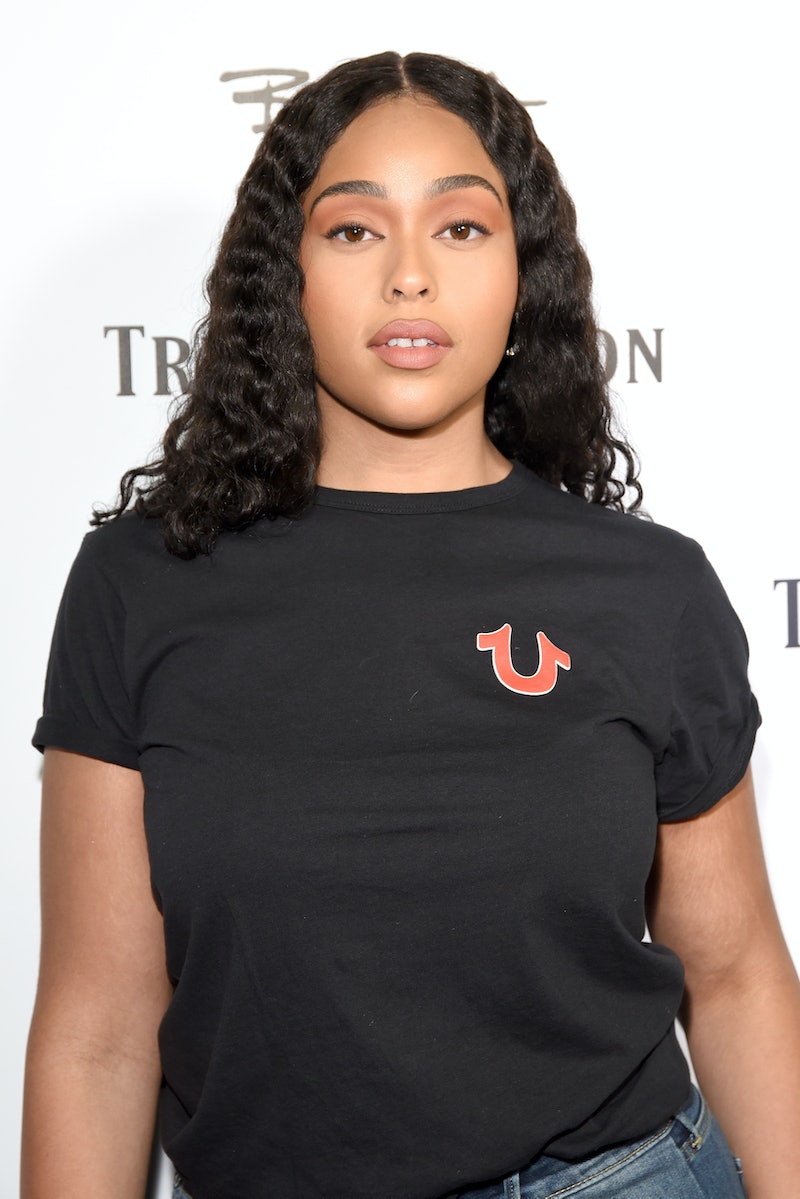 After a week where the name on everyone's lips seems to be hers, Jordyn Woods has finally confirmed her first interview about the Tristan Thompson cheating accusations will be happening so soon. Taking to her Instagram live on Tuesday afternoon to share the news, she announced that she was filming her first interview post-scandal for Jada Pinkett Smith's Facebook Watch show Red Table Talk. The news comes days after she first alluded to the rumors on Thursday, February 21 at a launch party for her line of false eyelashes with Eylure. But with this Red Table Talk interview, airing Friday at noon ET, as reported by People and confirmed by Bustle, Jordyn's side of the story will likely be revealed.

On the show, she will likely address the situation that has unfolded these past few weeks. Here's a quick refresher: on Tuesday, February 19 E! News and Us Weekly confirmed that Khloé Kardashian and Thompson had officially split. On that day, TMZ and Hollywood Unlocked also reported that Thompson had been seen reportedly cheating on Khloé with Woods, Kylie Jenner's best friend, at a party. (Bustle reached out to reps for Woods, Kardashian, and Thompson for comment on the rumors, but has not heard back.)

The Internet promptly lost its collective mind with everyone from Khloé herself to members of the Kardashian clan addressing the cheating rumors.

On Woods' Instagram, she is seen wearing a black turtleneck dress with a pair of sneakers and hair in a slicked back pony. The video appears to be taken behind the scenes of the sure-to-be explosive interview. At one point, Woods turns to face the camera directly with a look, perhaps signaling the no-holds-barred nature of her comments.

But many are craving real answers to the questions surrounding this situation. Tasked with getting them is Red Table Talk hosts Pinkett Smith, her daughter Willow, and mother Adrienne, though it is unclear who was present for the sit-down. In fact, Woods' choice for her first interview isn't as surprising as it seems. According to People, Woods has a connection to the Smith crew with her late father knowing the family for years before Jaden Smith actually introduced Woods to Kylie. (Just when we thought this couldn't get more tangled).

Woods' comments so far on the matter have been brief, saying at her Eylure line launch:

"Through everything that's been going on, you know it's been real, and Eylure has been super real."

Though this will be Woods' first official, lengthy comments, Khloé said her piece about the situation via Twitter on February 26.

Thompson initially acknowledged the report on Twitter himself, tweeting "FAKE NEWS," before deleting, per Elle. However, this isn't his first brush with cheating rumors, after he faced cheating accusations during Khloé's pregnancy last year.

And now, Jordyn and Kylie's longtime friendship seems to have suffered due to the scandal as well. People is also reporting that the relationship between Woods and Jenner reportedly remains fractured, with Woods reportedly moving out of Kylie's house on Feb. 20.

People's unnamed source revealed, “Jordyn has been like Kylie’s sister. They were inseparable, and always together. Jordyn often helped Kylie with Stormi. Kylie was always so excited to have Jordyn around. It seems Kylie isn’t sure what to do, but it seems impossible for her to keep Jordyn around.”

In a pop culture news cycle that can spit out more fiction than fact (Khloé for Bachelorette, anyone?), a transparent look into one party's perspective will be essential. Whether you tune in to rage-watch or out of genuine curiosity for Woods' side, it's clear she has something to say.

More like this
What To Know About Simon Guobadia’s 3 Ex-Wives & Children
By Brad Witter
Meghan Markle Just Addressed *Those* Wild 'Real Housewives' Rumours
By Sophie McEvoy
We’ve Got A Text! Another 'Love Island' Series Is On The Way
By Darshita Goyal
6 Of Mike Tindall’s Unfiltered & Royally Entertaining Jungle Confessions
By El Hunt
Get Even More From Bustle — Sign Up For The Newsletter