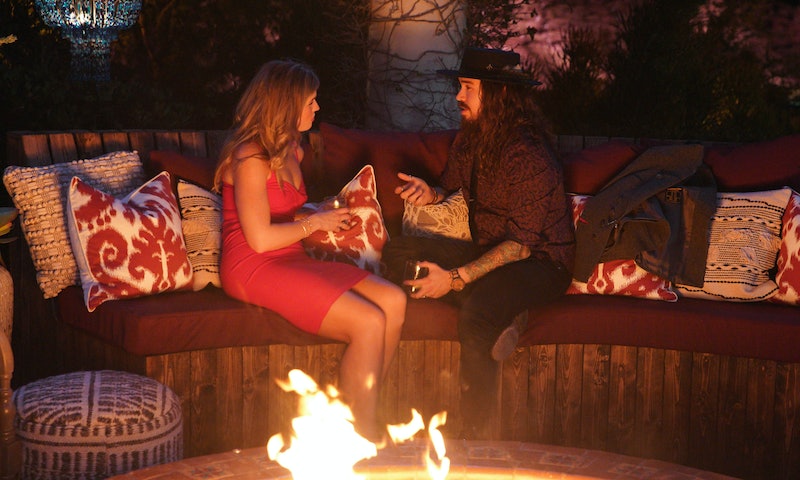 Though we won't know if Sheridan and Julia are still together until the Bachelor: Listen to Your Heart finale — that is, if they make it that far — the two already seem like one of the strongest couples. On the first night in the mansion, Julia felt comfortable enough to open up to Sheridan about being diagnosed with Cystic Fibrosis and how she was in and out of hospitals growing up. Sheridan, meanwhile, explained during his intro that he hadn't dated anyone in long time because he'd been on the road for his music (he calls his Subaru, Sheila, his "one true love"), but was pretty immediately smitten with Julia. If anyone is still together after the show, it seems like it would be them.

Predictably, neither have let any spoilers slip about where their relationship stands now. Sheridan has been promoting his music and appearance on Listen to Your Heart, and trying to remain positive despite not being able to perform at this year's SXSW, which was canceled due to COVID-19. "We will have festivals again, we will have shows again, we will have normalcy again, even if it's a bit different than what we were used to," he wrote on Instagram. "Things change and that's part of life."

Julia's also had her own set of troubles during quarantine in Ocean City, New Jersey. First she broke her foot, then she had a hair dye mishap, joking that her resulting orange roots made her look like Joe Exotic. Fortunately, she has since rectified the situation.

Joking aside, Julia is taking the quarantine very seriously because of her condition and urged her Instagram followers to stay inside. "This isn't a Morgan Freeman movie," she wrote on March 12. "It's real life. It's not just my life. It's your grandmother's, your father's, your cousin's, your neighbor's. It's your own. So let's move forward with that in mind.... Let's do our best to protect one another."

It doesn't seem like she and Sheridan are quarantining together, but there's still a chance these songbirds go out on a high note.