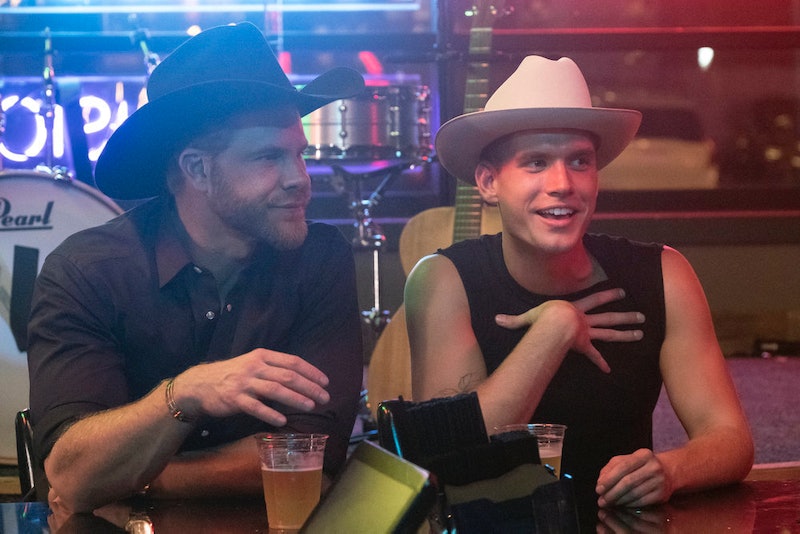 This season is all of Very Cavallari is all about showing Kristin's friends a good time so that they move closer to her, and this week, the Uncommon James creator took Justin and his boyfriend Scoot house hunting to really lay it on thick. Ever since her falling out with ex-best friend Kelly Henderson, Kristin has been eager for the couple to move out from Los Angeles, and after realizing they couldn't stay in her vacant, on-the-market house forever, they finally met with a realtor. The first house tour was a no-go — it was too close to its neighbors — but the second one showed signs of potential.

"We could have kids here," Justin said, as they sat down on a living room window bench. "Kids?" Scoot asked. "Shouldn't we get married though, before we have kids? You're jumping ahead." In a later confessional, Justin admitted that he may not be a traditional guy and that he doesn't need marriage to be committed to someone.

As of right now, according to their social media profiles, it doesn't look like either of them have popped the question. There are no rings to be seen on their hands in pictures, and no official announcement has been made. But they did end up buying the second house. Its all-white interior appears in Justin's Instagram Stories often, and it's clearly the same layout pictured in the episode. Except now, it's furnished and homey. The bench behind Scoot in this screenshot is the same one they sat on during their kids convo.

Now, the home is fully equipped for hosting and cooking and all the things. He casually had Chelsea Handler and Kristin over for dinner recently, and Instagram Stories of him cooking (shirtless, in an apron) for Scoot might be more adorable than the house itself.

He's still frequently traveling to L.A. to service his celebrity clientele, but when he is home, he's clearly embracing the stay-at-home-dad lifestyle. Even though he doesn't have kids — yet.

The rest of Very Cavallari Season 3 is sure to reveal more of the couple's future plans — and who knows, they may be hiding a secret engagement after all. It would make for great season finale material.