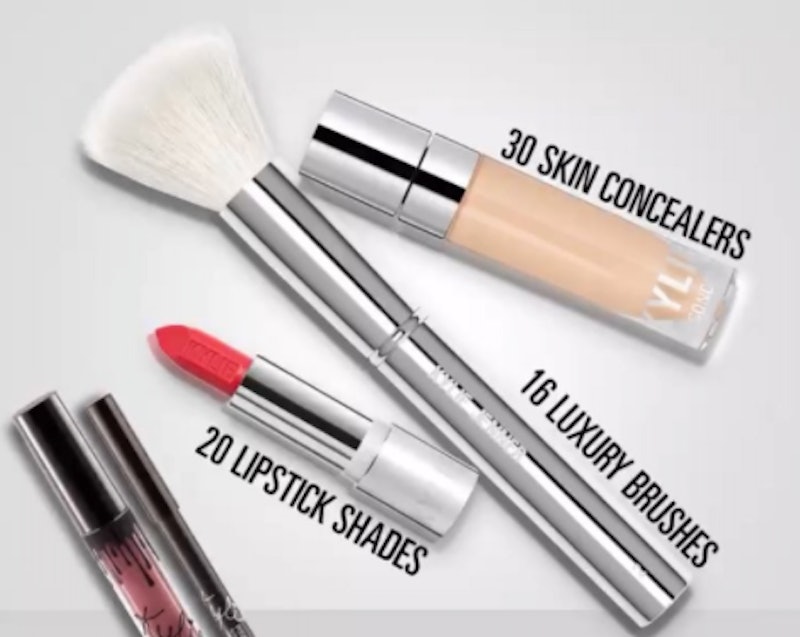 According to one commenter on the Kylie Cosmetics Instagram account, the lipsticks were gone in just 30 minutes. While the new Kylie Skin Concealers and Silver Series Brushes are still available — though three shades of the concealers have sold out — fans really seemed to latch on to the brand new lip products from Kylie Cosmetics.

Jenner launched an impressive 20 shades during the lippies' first run. From nudes to pinks to purple hues, the range was definitely impressive, and fans thought so, too. If you weren't one of the lucky fans able to purchase one of the new Silver Series lipsticks, don't worry. Jenner certainly isn't one to let her fans down when it comes to new products.

According to Jenner's social media and the Kylie Cosmetics Instagram, the Silver Series lipsticks are restocking next week. The $17 lipsticks feature a moisturizing creme formula in a classic bullet shape. If you're over liquid lips, you'll definitely want to shop the restock.

As of press time, there's been no confirmation of a time and date for the restock. Keep your eyes peeled to Jenner's social media and the Kylie Cosmetics Instagram and Twitter for the official announcement in the coming days.

While new quantities of the Kylie Cosmetics Silver Series lipsticks may be coming, that didn't stop fans from losing it over just how quickly they sold out.

The lippies were apparently selling out at a rapid pace.

For others, they just want the Silver Series Lipsticks for Christmas.

Before some fans could even get to the website, the lipsticks were sold out.

Fans were stressed about the whole experience.

Some were just purely heartbroken.

While Jenner's lipsticks were clearly highly sought after, the Silver Series Brushes have undoubtedly stolen the show. Why, though? The collection of 16 brushes caused a massive outcry on the internet thanks to its $360 price tag — and massive is definitely not an exaggeration.

Fans and beauty lovers were shook over the high end price tag and took to social media to express their frustration. Jenner, who appears to typically shy away from addressing controversies about her brand, even took to her personal Twitter account to address the issue. The brand creator explained that the brushes are real hair, not synthetic, which increases the price. She contended that the price is comparable to other real hair brands, like MAC and Kevyn Aucoin.

While Jenner did explain that she was open to creating synthetic brushes later, the Silver Series Lipsticks appear to be the real draw of her second Holiday launch.

While people were discussing the brushes, others were clearly planning their lipsticks purchases. Given that it's a brand new product during a first-time launch, the fact that it sold out shouldn't come as too much of a shock, but at least Jenner knows her fans and is making a quick turn around on the restock happen.