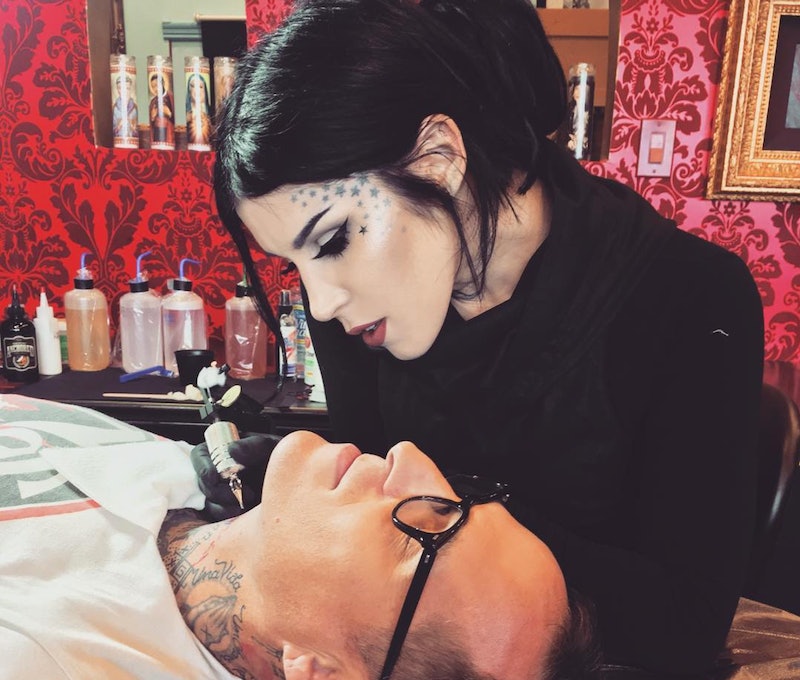 It wasn't an press release from the brand or even an official post, but here's the thing: Kat Von D just revealed her brand's new highlighters... via Instagram comment. Yep, it wasn't even a full post — it was a comment! You see, it started when she posted a picture of herself tattooing her friend Toby Morse's throat — her fans were quick to notice that her highlight game was seriously on point. Eventually, she replied to the very accurate comment, "Holy highlight," and said, "oh just wait for the @katvondbeauty Metal Crush highlighters!!! Coming soooooooon!"

Then, later in the thread, after one of her fans asked about her glowing cheekbones, she elaborated further, saying, "it's one of the new @katvondbeauty Metal Crush X-treme highlighters I'm currently testing!" All in all, pretty exciting, right? Being in the testing phases doesn't mean the product is necessarily coming soon, but if anyone out there is equipped to take on the challenge creating the perfect metallic highlighters, it's Kat Von D.

The potential new Kat Von D Metal Crush X-Treme highlighters would come in addition to the existing Metal Crush Eyeshadow line, and would join the brand's popular Alchemist Palette and Lock-It Brightening Powder as one of the new highlighters in the line.

Beauty news Twitter TrendMooD was quick to pick up Von D's telling comments about the new product. (And their tweet is spot on — the new highlighter is definitely worthy of an "OOOMMMGGG").

Hopefully, the Kat Von D Metal Crush X-Treme Highlighters will launch ASAP. Kat Von D Beauty gets so much right, and their take on metallic highlighter is sure to be straight fire.

What do you think? After taking a look at the picture that launched the announcement via comments, it's hard not to get excited about the new product.