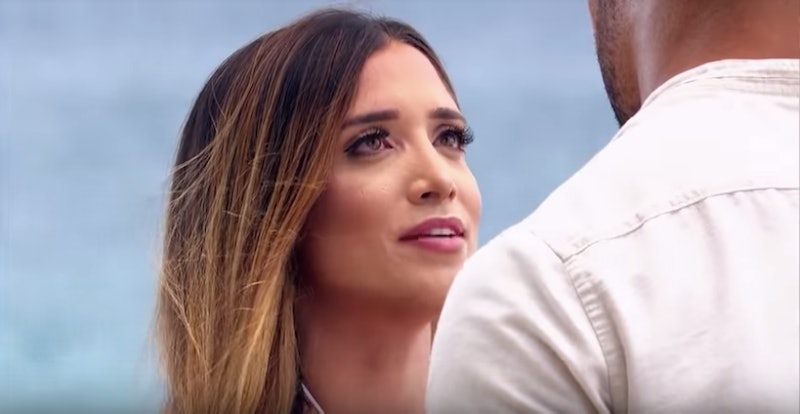 Nicole and Clay have certainly been thrown some curveballs during their time on Bachelor in Paradise — first with Christian starting drama, and then with Clay's ex Angela showing up to join the cast. But if they could get through all of that and still come out as one of the season's strongest couples, you'd think it's pretty likely that Nicole and Clay are engaged after Bachelor in Paradise. The only problem? The latest promo hints there's trouble for the couple still to come.

The clip teases that the time for proposals has arrived, but not everyone will be ready to commit to one another in such a serious way. At the end of each season, every couple is given a choice: they can take the leap and get engaged, leaving Paradise together as a couple, keep dating but not get engaged, or break up and leave as two singles still looking for love. Nicole and Clay have shared a strong connection all season, so you'd think they would jump at the chance to take their relationship to the next level. However, the promo teases that Clay's hesitation of saying (or rather, not saying) three little words could bring their love story to a crashing halt.

"Do you love me? Answer that right now," Nicole is shown saying to Clay. The video cuts away before Clay has a chance to respond, but his hesitation speaks volumes. He may not be ready to take their relationship to the next level so quickly, especially since he doesn't seem to be completely over his recent breakup with Angela (you know, based on the fact that he can't stop talking about it). If he's unable to say the L word to Nicole, then the odds of them getting engaged feels significantly low. Of course, they could still choose to leave Paradise together and continue dating, but if they aren't on the same page emotionally, they may decide to part ways for good.

In fact, a recent tweet from Nicole could hint that their relationship doesn't work out.

"So, I'm having a sleepover with @TayshiaAdams tonight and we're about to go get ice cream, but first, we both wanna say that dating is hard (shocker)," Nicole wrote. "We are all the product of dating in the 21st century. It's a nightmare. That's the tweet and the tea. goodnight amigos and haters." Referring to dating as being a "nightmare" doesn't exactly imply a successful outcome at the end of Paradise. If things were going well with Clay, you'd kind of expect a more positive outlook.

Of course, it's still possible that the two got engaged and then broke up after filming, and Nicole is hinting at the fact that things ended badly. But regardless of what happens in (or after) the BiP finale, it's important that both Clay and Nicole do what's right for them. If they ultimately realized they aren't right fit for each other, then hopefully they'll each find someone who is.