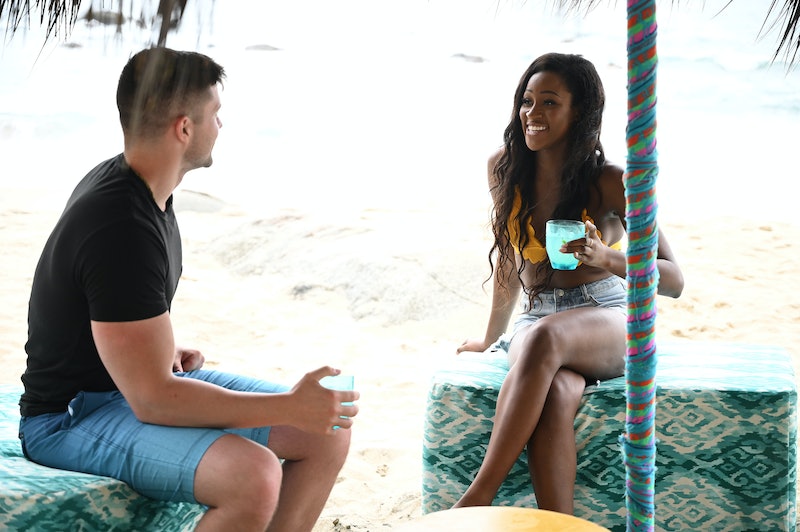 Tensions are always high on a show like The Bachelor — contestants are away from their friends and family, they're not allowed to have their phones, they're sequestered with only each other for company, and they're all competing for the same guy. It's easy to get heated, which is exactly what happened to Onyeka and Nicole on Colton's season of The Bachelor. But that was so long ago! Hopefully, Onyeka and Nicole are friends on Bachelor In Paradise and can put all their drama behind them. If only because fans were tired of the fighting last winter anyway — no one needs to bring that kind of baggage to the beach.

Onyeka and Nicole's beef started over Colton, who, while he can jump a fence in a single stride in dress pants, is not worth fighting over. (Pro tip: No man is ever worth fighting over!) Onyeka told Colton that Elyse, a self-eliminated contestant, told her that Nicole said she was only on The Bachelor to get out of Miami and jumpstart her career.

Yes, it could have been true, but snitching on The Bachelor never ends well. Onyeka and Nicole kept their argument going up through the cocktail party and rose ceremony for that week, even arguing about Colton in front of Colton. Colton didn't take it well, so it wasn't surprising when Onyeka and Nicole both got eliminated from The Bachelor not long after.

Now, according to the cast photo for Bachelor In Paradise, both Onyeka and Nicole are on the this season, which means that they'll probably have to hang out together (there's no way of knowing who stays and who goes when, but there's a good chance their paths will cross).

But are they still fighting? It doesn't really seem like it. Nicole and Onyeka don't seem to be best friends — Tayshia and Nicole are the BFFs from Colton's group, it seems — but they don't hate each other. Onyeka already retweeted a FaceApp–altered pic of the Bachelor In Paradise cast that Nicole put together for the internet.

If either woman wanted to be petty, they wouldn't be engaging with each other on Twitter, so it's probably safe to say that Onyeka and Nicole are over their drama. They were probably over the drama as soon as The Bachelor ended, honestly, because everything feels so much more heightened and dramatic and emotional in the moment when you're filming. When it's back to the real world, the silly stuff usually seems even sillier, and that's probably the case here.

But a word of advice for both Onyeka and Nicole — if you're both into the same guy, maybe don't fight about him in front of him this time? It didn't help either of you out the first time, and the men on Bachelor In Paradise are like public buses — if you miss one, there's another one coming soon enough as long as you're willing to wait for it. Hopefully these two women both get the shot at love they deserve this summer.

More like this
Kaitlyn Bristowe Said Chris Harrison Ignored Her After Her 'Bachelorette' Hosting Gig
By Grace Wehniainen
'Bachelor' Fans Think Rachel & Clayton Are Dating After This TikTok
By Grace Wehniainen
Zach Addressed His "Boring Bachelor Energy" After His Group Date With Latto
By Grace Wehniainen
All The Clues Zach & Christina Are Together After 'The Bachelor'
By Grace Wehniainen
Get Even More From Bustle — Sign Up For The Newsletter
From hair trends to relationship advice, our daily newsletter has everything you need to sound like a person who’s on TikTok, even if you aren’t.