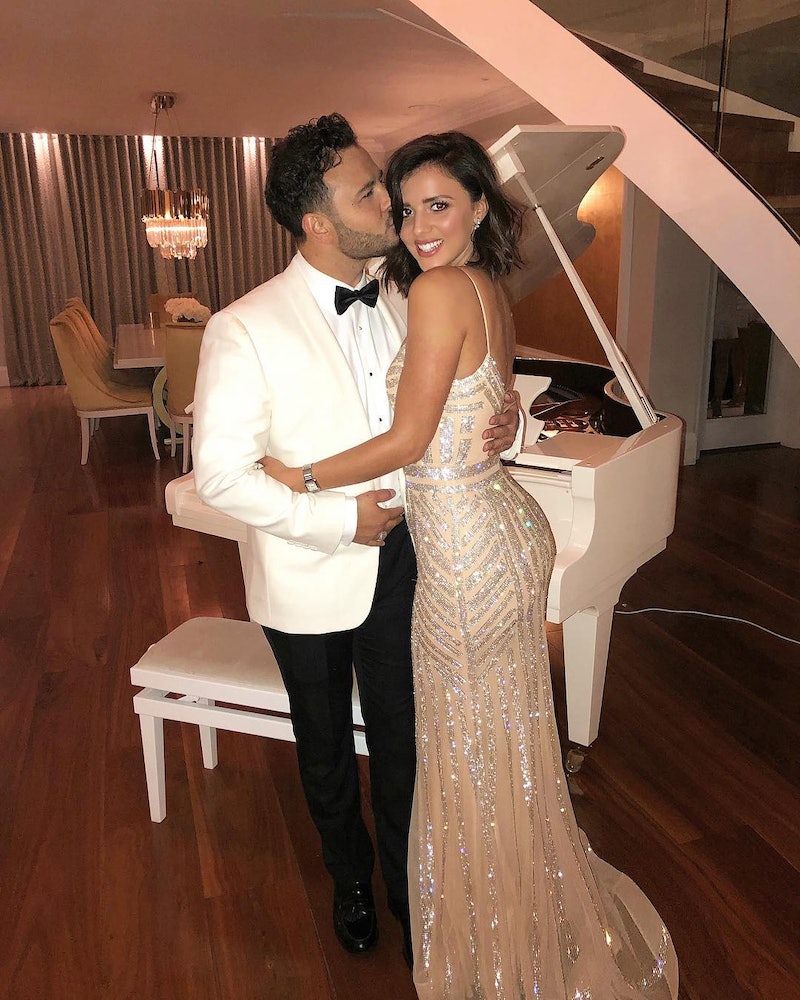 Ryan Thomas and Lucy Mecklenburgh got together on the set of Bear Grylls' Celebrity Island. The pair have gone from strength to strength ever since, making everyone wonder if one of them could have popped the question in the days following Thomas' return from the Celebrity Big Brother house. So are Ryan Thomas and Lucy Mecklenburgh engaged? Let's examine the evidence. And by evidence, I mostly mean the pair's Instagram pages. Since Thomas's CBB victory, it seems the two are closer than ever and look super loved up.

Thomas shared an adorable snap at the Rosewood hotel of the pair embracing, simply captioning it: "HER" along with a red love heart. Mecklenburgh shared the exact same image over on her own Instagram page, with the caption: "Finally ... My winner." K'nawwww.

She has also been consistently supporting Thomas throughout his (often traumatic) appearance on CBB. Before the final, Lucy shared a lovely picture of the couple looking out over the sea on holiday. She wrote: "Counting down the minutes until I get reunited with my [world and heart emojis] If u think @ryanthomas84 deserves to Win CBB here’s the numbers to vote."

She had also previously written a post in response to the ongoing issue between Ryan and fellow CBB contestant Roxanne Pallett, who unfairly accused Ryan of 'punching' her arm in an aggressive way, which eventually led to her departure from the the house and a huge backlash from the public. In a cute photo of Ryan and Lucy in bed together, Lucy wrote:

"It’s been the hardest couple of days. Watching the person u love go through hell. It’s been extremely upsetting and uncomfortable to watch. I still can’t imagine how painful this all must have been for him, I really can’t. I’m trying not to to be honest as every time I do I burst into tears and want to get into my car to drive to Elstree to get him out!! But finally it’s over. Thank you for all the kind supportive messages u have sent me and ryans family P.S Karma"

The couple has been together since they met on Bear Grylls' Celebrity Island in April 2017. They struck up a firm friendship and their bond grew into a romantic relationship shortly afterwards. They confirmed their relationship in July 2017 when they attended Wimbledon together, as the Daily Mail reports.

They've previously spoken to OK! Magazine about their marriage plans, with Ryan saying: “We’ll have a massive wedding. It would be huge and one big party. It would be bigger than my brother Adam’s!”

He also told the magazine: “I’m a softie and I wouldn’t have her around my daughter unless I knew she was going to be around for a very long time. I said the love word straight away. It gets used very frequently in my life — I’ll tell my mates I love them daily. Lucy isn’t as open as I am.”

The couple faced split rumours back in June 2018, but have proven they are still firmly an item and are happier than ever. So despite no official confirmation that the pair is engaged (I reached out to both of their reps), it's plain to see they're seriously in love. So keep your eyes peeled for an engagement announcement — surely it won't be long?