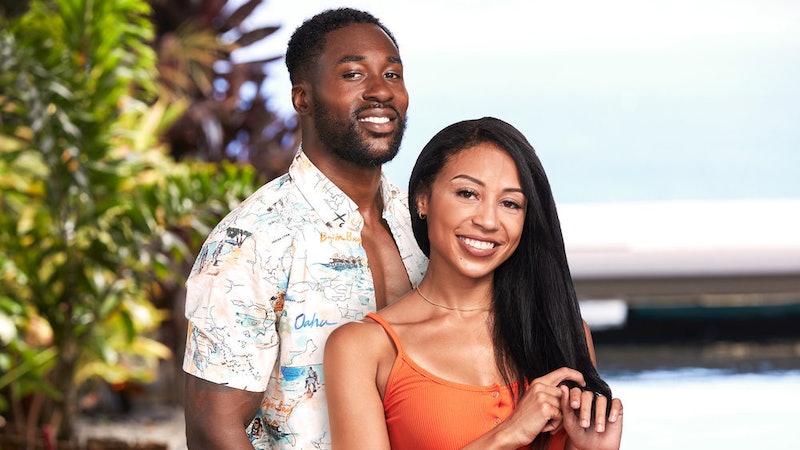 Temptation Island may only be two episodes in, but Shari and Javen are already experiencing some trouble in paradise. The couple argued when they first arrived on the island, and in Episode 2, they seem to be making all the wrong moves when it comes to interacting with the singles. But if Shari and Javen aren't together after Temptation Island, then maybe it'll all turn out for the best in the end.

In the premiere, the two 25-year-old high school sweethearts explained that they'd been together for eight years. However, they fell on hard times when Javen went off to college and cheated on Shari. Although they stayed together, Shari admitted their trust was broken.

In an interview with Reality TV World, the San Franciscoan explained that Javen told her the affair wasn't an emotional one, but it hurt her nonetheless. "He was between 18 and 20 and was freshly in college," Shari began. "And for him, it wasn't — he said it wasn't any emotional connection and the girl didn't mean anything — that he was just a young guy making dumb mistakes. And I mean, I believe him in that aspect. I really don't think me or him are really the type to develop emotional connections with people that easy."

In Shari's case, that's definitely proven to be true. While chatting with James in the house and on their first date as a couple, her body language was nervous and stand-offish. It's understandable that she missed her boyfriend and didn't want to cheat on him, but it seemed more like she was just regretting the whole decision to come on the show in the first place, and didn't want to give James a real shot.

At the bonfire, when host Mark Walberg played the girls the clips of their boyfriends, Shari was instantly moved to tears by the clip of Katheryn telling Javen she was attracted to him, and Javen's confessional about his own nervousness when it came to being touched by another woman. Although Mark urged Shari to remember that she didn't actually get to see everything that happened from the clip, she insisted that if anything happened at all between Javen and someone else, the couple would be over for good.

So did Shari and Javen have some sort of agreement with one another about was and wasn't allowed to take place with the singles? In his own interview with Reality TV World, Javen revealed that he and Shari did have a set of ground rules to stick to — and he was actually the one that came up with them. "A lot of stuff is unforgivable in my world," he said. "I can be dramatic and I can be a lot, so any kissing, hand-holding — anything like that — is a red flag for me and would set me off. So we kind of had this little thing where you just know, 'Don't do something you wouldn't want the other person to do.'"

On first viewing, Shari's dramatic response to Katheryn touching Javen's arm may have seemed like a slight overreaction, but hearing that he'd broken their agreement puts it all in perspective. No wonder she was so devastated.

At this rate, it seems like some time apart is exactly what Javen and Shari need, and judging by their Instagrams, that's exactly what they got. Both of their feeds are filled almost exclusively with pictures of themselves and themselves alone — not with each other. And considering Javen's page dates back to 2016 and Shari's to 2017, that's not exactly a sure sign they came out of Temptation Island as a couple. In fact, the only photo of them together is a promotional shot for the show, which Javen captioned ambiguously, "Morals, values and loyalty all put the the ultimate test. It’s either Pass or Fail. Get ready for a wild ride."

Then again, they're probably under strict contract not to let any spoilers slip, so perhaps they're just trying to throw nosy viewers off the scent. For now, we'll just have to watch how it all plays out.