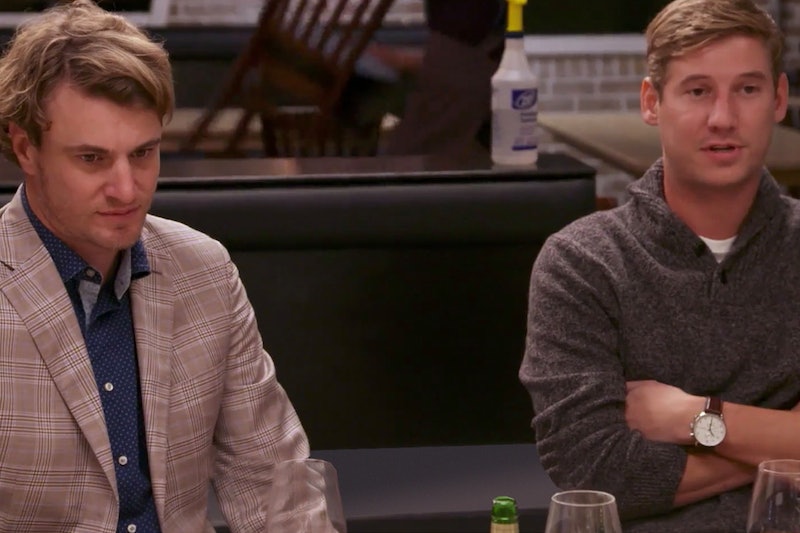 It may seem like this season of Southern Charm has revolved around ups and downs in Austen Kroll and Madison LeCroy's romance, but the major relationship at stake is Austen and Shep Rose's friendship. Or at least that is what it seems based on episodes shot months ago. Are Southern Charm stars Shep and Austen still friends at this point in time?

Shep decided to bring the two women from Austen's infamous video to the season finale party, much to the chagrain of Austen and his on-again-off-again girlfriend Madison LeCroy. When Austen confronted Shep, he called him "petty" and declared "this friendship is in total ruins."

Well, a lot of time has passed since that intense fight and it seems like time heals all wounds. Or maybe, just maybe, Shep apologized to Austen, even though it is very unlikely. The two of them have been hanging out a lot this summer, sans Madison, of course. There's no chance that Shep and Madison can peacefully hang out in the same room if there isn't a camera crew present. Even then, their interactions are far from peaceful.

They've even been liking each other's posts and leaving comments on each other's Instagram photos. They even spent an August weekend in the Hamptons together along with their costar Craig Conover and Real Housewives of New York star Ramona Singer, of all people.

This is a Bravo cast trip that really should have been filmed. Even Below Deck Mediterranean star Anastasia Surmava was there. A picture of a fun time does not guarantee that the two pals didn't argue at all during the trip, but that's just how their friendship is these days: digs back and forth mixed in with some partying.

That same weekend, Shep posted a meme making fun of Maroon 5 and Craig. And for anyone who needs another confirmation that Shep and Austen are cool, he said that he and Austen were on the same page when it comes to their music selections.... and shading Craig.

In a July 31 interview Austen did for the Southern Charm After Show, Austen discussed his dynamic with Shep ever since Madison came into the picture. Austen shared, "The thing with Shep is that he thinks you're just gonna continuously choose Madison over him or over anyone else in your life. And that's kind of being a bad friend." Shep was just "kind of" being a bad friend?

Austen complained, "I'm just really in a rock and hard place. I'm like 'this sucks.' My girlfriend and my best buds do not get along." During that same segment, Cameran Eubanks suggested that Austen has been "blinded by love" and he agreed, adding, "I'm not the first person to experience this." So, does that mean he agrees with Shep's assessment of Madison? Unclear, but it does seem like Austen is more concerned about his standing with Shep than his status with Madison. Ouch.

He confessed, "It really affects me because I'm like 'Man. This might affect my relationship with Shep.'" And what about Madison? Shep is not a fan of Madison's. At all. On the Juicy Scoop With Heather McDonald podcast, Shep said, "I like Austen. I think she's the worst thing that's ever happened to him and there's not even a close second, but I haven't know him my whole life. Actually, forget that. That's not nice." The phrase "not nice" does not even suffice as an accurate description of that.

Shep even remarked, "I think she brings out the absolute worst in him. There's a sh*t talking thing that he can get into because of her." Pot, please meet Kettle. These two really were made for each other.