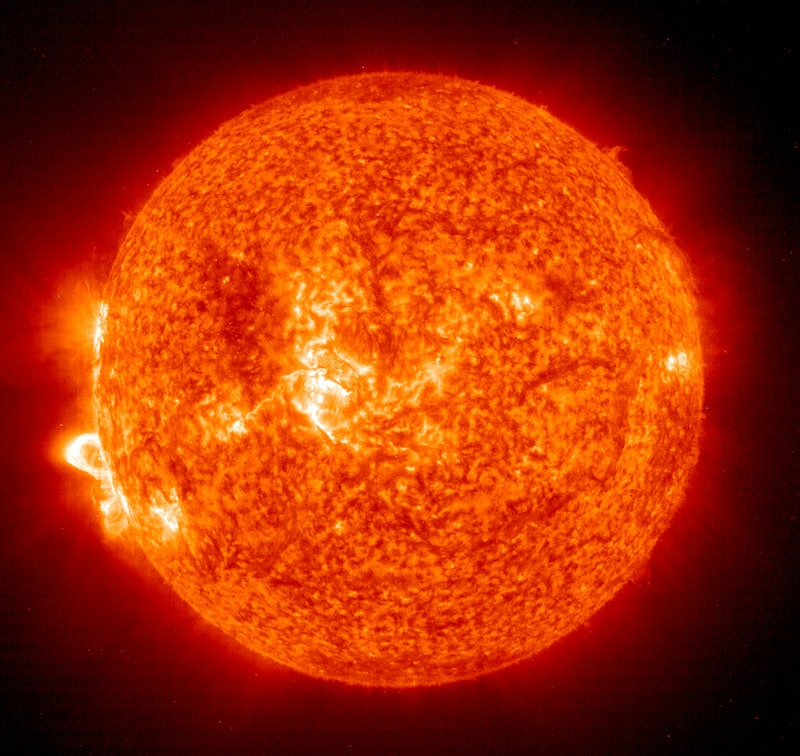 Though most of the world’s attention has been on the impact of Hurricane Harvey and Irma over the past several days, the sun has also been displaying some unpredictable behavior this week. As confirmed on Friday, NASA recorded a series of particularly strong solars flares last week, begging the question of whether or not these solar flares actually dangerous. The radiation bursts can have an impact on our planet, so here’s what you need to know.

Since Sept. 4, NASA has captured images of five large solar flares in more or less the same region. One of them, spotted on Sep. 6, was the biggest solar flare that’s been recorded by scientists since 2008. So why the sudden flurry of activity on the sun, and what does it mean for us?

According to NASA, solar flares are described as bursts of intense radiation emanating from the sun. They can last anywhere from minutes to hours and are often caused by sunspots — cool, dark regions that form on the sun’s surface due to fluctuations in the sun’s magnetic field. Sunspots can occur relatively frequently during the sun’s 11-year solar cycle and can lead to the types of solar flares that scientists have seen over the last week.

But if you’re picturing solar flares to be some sort of huge explosion that can hurl energy at our planet, think again. They actually pose no direct threat to humans. I repeat: The solar flares are not an immediate danger to the planet. Why? The Earth’s atmospheres actually protects us from the effects of this kind of space weather. That means that the explosive heat of a solar flare cannot make it all the way to Earth, no matter how powerful it may be.

While a solar flare’s heat can’t make it all the way to our planet, its electromagnetic radiation and energetic particles can. Per NASA, the solar flares can create disruptions with signal transmissions, which can then throw off GPS satellites by several yards. So if you’ve noticed that your GPS has been going kind of haywire lately or that one of your favorite radio stations has suddenly gone silent this week, the solar flares could be to blame.

Solar flares are also sometmies associated with coronal mass ejections (CME), a different phenomonen produced by the sun that propels bursts of particles and electric fluctuation. These bursts can mess with the Earth's atmosphere and blow out transformers in power grids. The CME’s particles can also collide with some key electronics located on satellites, causing a disruption in its systems.

Where does that leave us? All of this solar activity could theoretically result in repercussions beyond the disruption of just your cellphone service and your car’s GPS. After all, spacecraft operators and airline pilots rely on airplane navigation to safely fly, while accurate time synchronization from satellites is imperative for financial networks to govern transactions.

That being said, there’s certainly no need to panic. The world can prepare for a solar flare much in the same way it does for a natural disaster — take early precautions and warn everyone who may be affected as soon as possible.

In the case of these solar flares, NASA scientists typically gives warnings to electric companies, spacecraft operators, and other important groups so that they can take the necessary steps to ensure that all their operations run safely and smoothly.

However, if you’d like to stay informed or are just curious to learn more about the solar flares, you can check out the NOAA's Space Weather Prediction Center, which is the U.S. government's official source for all things space weather, including forecasts, alerts, watches and warnings.