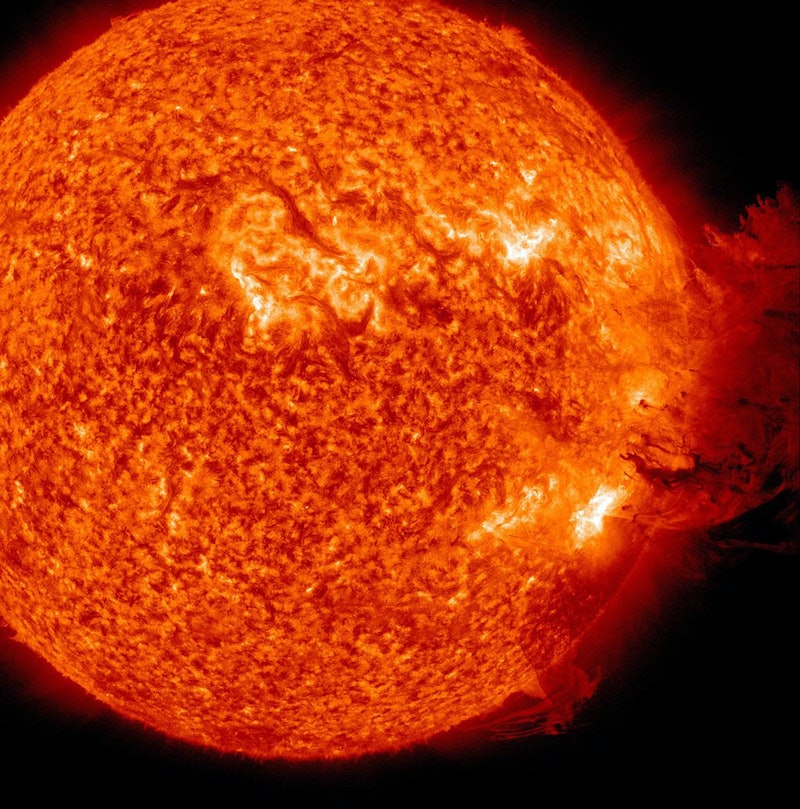 If you’ve been feeling the effects of Mercury retrograde (or retroshade) for a lot longer than you expected to this week, there could actually be a scientific reason behind it. For some reason, this week we citizens of the solar system have been experiencing an unexpected rash of particularly strong solar flares. What are solar flares, you may ask? They’re bursts of intense radiation emanating from the sun that can affect radio waves as far away as Earth, according to NASA. So, if your GPS has gone haywire anytime in the last few days, you can thank the bubbling mass of gas and radiation that gives life to everything we know.

USA Today reports that NASA recorded the biggest solar flare since 2008 this week, and four other flares that could be classified as large. Solar flares occur when the motion of the sun’s inner forces messes up its magnetic fields, aka the physics that keeps it all together. I honestly don’t know how to explain how it works, so I’m just going to quote NASA: “[Solar flares] are created when the motion of the sun’s interior contorts its own magnetic fields. Like the sudden release of a twisted rubber band, the magnetic fields explosively realign, driving vast amounts of energy into space.” They look like massive ropes of energy flying off the sun, and if you still have your eclipse glasses, you can see the sunspots that these giant flares leave in their wake, too.

All that energy has some pretty shady effects on Earth. Our planet’s atmosphere is too thick for the radiation to affect humans in any substantial way, but solar flares can run communications signals through the wringer. Geek reported that some GPS signals went dark for a few minutes thanks to an enormous solar flare on Sept. 6, and if you happen to use a radio, it also may have experienced some interference. Accuweather says that energy from solar flares can even affect cell service in some areas. So if you thought you were having a Mercury retrograde hangover, don’t worry; it’s just the sun.

One cool thing, though, that happens as a result of solar flares and their close cousins, coronal mass ejections, is increased activity in the Northern Lights. Normally, you can only see this amazing natural phenomenon in the far north or far south of the planet, but because of the major magnetic hustle and bustle happening in space, the range of these lights will increase dramatically. A report from the National Oceanic and Atmospheric Administration suggested that after the monster flare on Wednesday, the lights might have been visible as far south as Chicago.

Unlike climate change, which is top of mind this week as Hurricanes Harvey and Irma wreaked havoc over the United States, there’s nothing we can do on Earth that will affect the rate, intensity, or duration of solar flares. However, scientists are a little stumped as to why these massive flares are happening now, as the sun is technically edging towards its point in its 11-year cycle of solar activity. Newsweek reported that scientists have observed changing patterns in solar flare activity over the last few years. Beyond the current hyperactivity, the sun didn’t display any sunspots for a full two years — which, as Newsweek notes, had not been recorded in over 100 years. Another analysis found that the rotation rate of the sun has also changed, with unknown effects for us down here on Earth. “We are not quite sure what the consequences of this will be,” Yvonne Elsworth, from the University of Birmingham, told Newsweek, “but it's clear that we are in unusual times.”

More like this
How To Use Instagram Story Highlights So Everyone Sees Your Fave Stories
By Brandi Neal and Emma Carey
13 Selfie Instagram Caption Ideas That Exude Main Character Energy
By Jessica Booth and Emma Carey
The Spiritual Meaning Of The August 2022 New Moon
By Nina Kahn
Your Daily Horoscope For August 10, 2022
By Mecca Woods
Get Even More From Bustle — Sign Up For The Newsletter